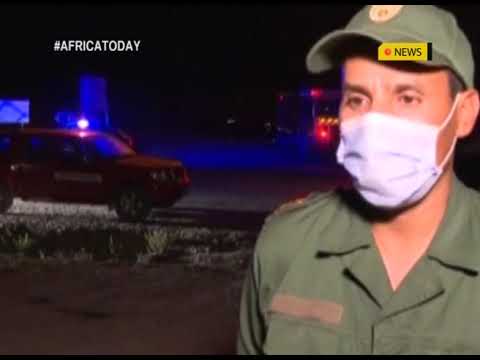 Ann Arbor (Informed Comment) – Since the UN Conference of Parties (COP) 26 is meeting in Glasgow this week, we will be looking at climate and energy issues in the Middle East.

Today I want to make some remarks about Morocco, which has one of the most ambitious green energy programs in the region, but which is still dominated by dirty fossil fuels. It faces severe climate challenges, and some parts saw temperatures of 120 degrees F (49C) this summer, sparking massive forest fires.

Morocco borders both the Mediterranean and the Atlantic, and with a population of about 38 million is the 40th largest of the 194 countries in the world. It is in global terms desperately poor, with a nominal GDP of $120 billion or so, and its per capita GDP ranks at 148 in the world.

Despite its poverty, Morocco is a lovely country, rich in history and architectural glory, and a center for Sufism or mystical Islam. Some 40 percent of the work force is still employed in agriculture. The modern sector of tourism and industry accounts for 2/3s of the economy but for only 1/3 of the work force.

Morocco has almost no hydrocarbons of its own, but imports them to produce about 63 percent of its electricity. That is down from 91 percent in 2005. Morocco says it wants 50% of its electricity to come from low-carbon sources by 2030, in only ten years.

The government made a push in the past decade for more wind and solar energy, and has built big new facilities for wind and solar, including the famed concentrated solar plant at Ouarzazate on the edge of the Sahara. It has gotten the percentage of its electricity coming from renewables up to 37% (it wanted 42% by the end of last year but missed that goal).

Moroccans are doing the right thing, and are light years ahead of almost everyone else in the Middle East and Africa. Plus because of the character of their economy they only produce about 2 tons a year of carbon dioxide per person, well below the world average. For the average American it is more like 15 tons.

Still, they continue to use a lot of dirty coal and natural gas (the latter making them vulnerable to boycotts and pressure by their rival Algeria).

Morocco is extremely vulnerable to the worst effects of the climate disaster. Some 60% of its farming consists of raising cereals, an artifact of its past as a French colony (France is grain hungry). All of this cereal farming is water-intensive, and in Morocco it depends on rainfall. So write Ismail Ouraich and Wallace E. Tyner.

As the climate emergency unfolds, because of our burning of fossil fuels, putting greenhouse gases into the atmosphere, Morocco is going to become drier. Rainfall will decrease, according to climate models, by something like 15% to 30%, and there is a possibility that it could be halved (!!!). Some regions of Morocco will be hit by droughts more than others, and cereal-growing productivity will take a substantial hit.

The IPCC noted, “A reduction in rainfall over northern Africa is very likely by the end of the 21st century. The annual and seasonal drying/warming signal over the northern African region (including North of Morocco, Algeria, Libya, Egypt, and Tunisia) is a consistent feature in the global (Giorgi and Lionello, 2008; Barkhordarian et al., 2013) and the regional (Lionello and Giorgi, 2007; Gao and Giorgi, 2008; Paeth et al., 2009; Patricola and Cook, 2010) climate change projections for the 21st century . . .”

Not only will there be less rainfall, but “Reduced snowpack in the Atlas Mountains from a combination of warming and reduced precipitation, combined with more rapid springtime melting is expected to reduce supplies of seasonal meltwater for lowland areas of Morocco (García-Ruiz et al., 2011).”

So Morocco is doing what it can as a poor country to green its electricity. It has done nearly twice as well at putting in wind and solar as the United States, proportionally. But it is also especially vulnerable to the effects of global heating. Its population is still growing, and its ability to produce food is going to decline over the coming 80 years because of a significant decrease in rainfall. Some parts of Morocco are also already very hot, and a big increase in average temperature will make it hard to work outside.

Other parts of the Middle East are doing far less on climate and face even bigger catastrophes. Michael Wintour at the Guardian wonders whether the Muslim pilgrimage to Mecca will even be possible in the summer at the end of this century.