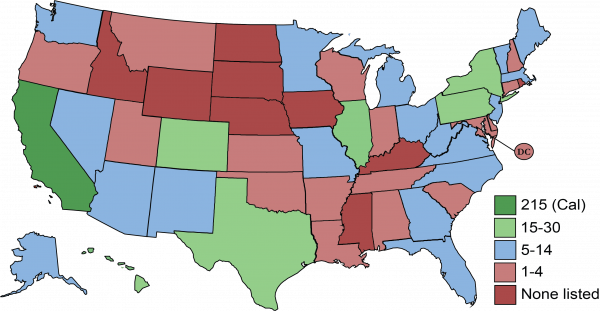 Ann Arbor (Informed Comment) – Both at COP26 and in the U.S. Congress, a lot of attention is rightly focused on what governments are doing to confront the dire challenges of our climate emergency. Ultimately, governments are the only entities with sufficient reach and power to guarantee an energy transition away from fossil fuels. Nevertheless, business investments in sustainable energy and business abandonment of the dirtiest fossil fuel are significant components of any successful policy.

On that front, a new S&P Global Market Intelligence report points to some really great news for the U.S.

S&P projects that companies are planning to install 44 gigawatts of new solar in 2022.

The year 2020, despite the onset of the pandemic, saw a record-breaking 19 gigawatts of new solar capacity installed in the U.S.

So given the bids out there already, it appears that in 2022 solar installers will more than double their best year ever so far. The U.S. currently has 100 gigawatts of solar electricity-generating capacity, so in just one year we are poised to add nearly 50% of our current total.

A gigawatt of power can provide electricity to about 750,000 homes. So the 44 new gigawatts we’ll put in next year have a nameplate capacity that would under ideal conditions allow them to power 33 million homes. Because the sun does not shine at night, it would be necessary to put in a lot of battery capacity to make full use of the new solar installations. Batteries can be charged during the sunlight hours and then can empty the charge at night.

So there is more good news on that front. S&P is expecting over 8 gigawatts of new battery storage to be put in. The US already has 24 gigs of battery storage, and California alone will have nearly 3 gigawatts by the end of this year. California put in lots more battery storage in 2021 because it had suffered brownouts and blackouts in August, 2020, when a heat wave upped the use of air conditioning and renewables were overwhelmed as the sun set. In 2021, the state had installed much more battery capacity, and August was milder, so there were no electricity shortages.

S&P finds that 27 gigawatts of new wind power will be installed in 2022.

The US currently has 127 gigawatts of wind, and only 6 new gigawatts were installed in the first half of 2021. So we will increase our wind capacity by a fifth in just one year. Some 62 gigawatts of new wind power is in the pipeline for installation by 2025.

People are not building new coal plants, and not very many new natural gas plants for electricity, because investment money is drying up as it has become clear that the US government and public opinion are shutting down fossil fuels. Almost all new electricity generation in the US is now wind, solar and hydro, often accompanied by battery shortage. The new sources generate electricity for very little money compared to fossil fuels, and if everybody moves to them we will all save a lot of money. I put in solar panels in 2013, and my summer electricity bills plummeted. I figure by now the panels have paid for themselves. I had also leased an electric car and they fueled it, as well. I don’t have a 9-5 job, so could often charge during the day. Very little in the way of gasoline bills for the length of the lease.

Not only is there a lot of good news on the green energy front but there is good news in the bad news for fossil fuels. S&P finds that coal plants are being retired way before the utilities had expected. Some 29 gigawatts of coal retirements are expected from 2020 through 2025. Coal still generates 223 gigawatts of our electricity. That number should be zero even now if we are to avoid making the whole earth a super-tropical hellhole. Still, in the next 4 years alone coal will decline nearly 15%. Even now, it is actually cheaper to build and operate a new solar or wind farm than just to go on operating a dirty coal plant.

The US will have 300 gigawatts of wind and solar by the end of 2022. We also have about 100 gigawatts of hydroelectric power. That is 400 gigawatts. If we can get enough battery storage to make full use of the sun and of strong winds, that would amount to a third of the 1200 gigawatts of electricity generation capacity in the US.

Despite some legislative setbacks, I am sure that President Biden will ultimately use executive orders to accelerate this transition, and if S&P’s numbers are right, we actually are making substantial strides toward green electricity in the US.