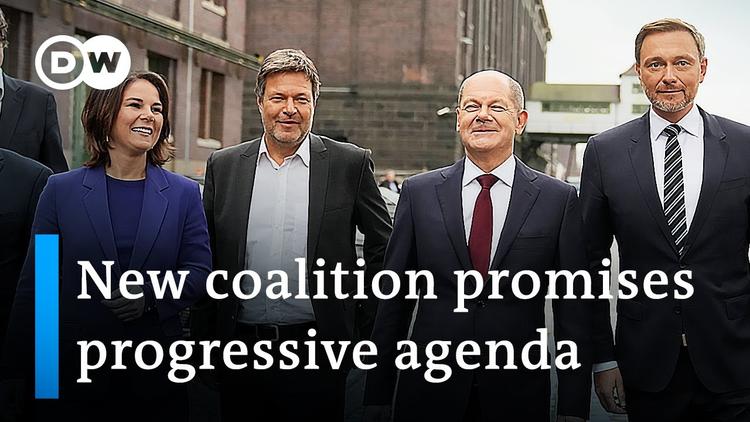 Ann Arbor (Informed Comment) – Germany’s environmentalist Green Party, led by two popular politicians, nearly doubled its seats in parliament to become a swing party for the formation of a new government coalition. Their prospects were boosted when the center-left Social Democrats narrowly beat the conservative Christian Democrats in number of seats in the September 26 election.

Now the Greens and the Social Democrats have announced a coalition with the neoliberal Free Democratic Party and have specified how they will split up the cabinet portfolios. Social Democrat Olaf Scholz will become Chancellor, probably after all three parties hold a final vote on the decision in early December.

People are jokingly calling it a “traffic light” government, with red for the Socialists, green for the Greens, and yellow for the liberals (in the European sense of liberal– we’d say fiscal conservatives).

These developments are excellent news for the Biden administration and its climate agenda, giving the American president powerful new friends in Germany who will be on the same page with him and his climate special envoy, John Kerry.

In fact, the coalition represents a sort of coup for the Greens regarding climate-related cabinet posts. Co-leader of the Greens, Annalena Baerbock, has been nominated for foreign minister. She will be the first woman to fill that post. She opposes the Russia-backed Nordstream II natural gas pipeline. She also wants to put human rights at the forefront of foreign policy and so will probably be unpopular in Moscow and Beijing, though the incoming Socialist Chancellor Olaf Scholz is said to be more wary of offending Russia and China.

The Greens will get the agriculture portfolio and have nominated Cem Ozdemir, a Muslim of Turkish extraction, for that post. He is the son of a textile factory guest worker who came in the 1960s. Among the 83 million Germans, there are probably about 4.5 million Muslims, 3 million of them of Turkish heritage, and if Ozdemir gets the position he will be the first Muslim or Turkish cabinet minister in German history. At some points in its history Germany or its predecessor states have ruled substantial numbers of Muslims (as with Tanzania and the Cameroons in the nineteenth and early twentieth centuries). Outgoing chancellor Angela Merkel has affirmed that “Islam belongs to Germany.”

The Greens will also get the ministry of environment.

But the big coup is that the other Green Party co-leader, Robert Habeck, has been nominated as the Economy and Energy minister. If he gets the position, he says he will rename it the ministry of economy, energy and climate.

Baerbock and Habeck hail from the deal-making wing of the party, and the common platform they hammered out with the socialists and the Free Democrats came under criticism from the impatient wing of the party who want to pull out all the stops to get a rapid transformation toward a low carbon society. By American terms, the platform is breathtaking in its ambition.

They aim at the phase-out of coal by 2030 instead of by 2038, the goal of the outgoing conservatives. The criticism here is that it is an aspiration and does not have real teeth. Still, it is expected that the German goal will resonate across Europe and hasten the death knell of coal.

All freshly installed heating systems in dwellings must by 65% renewable by 2025, which environmentalists would give their eye teeth to get in the US, but with which German Greens are disappointed as insufficiently ambitious.

The new government will invest in railroads over new highways, which will reduce carbon emissions over time.

The Green rank and file are disappointed that there is no hard and fast rule about phasing out internal combustion automobiles in favor of electric vehicles. The Socialists and the FDP refused to set hard and fast rules on the issue.

The new government hopes to legalize marijuana and foresees a tax windfall from that step. Maybe the Greens will get the extra money they need for their climate goals that way.

Still and all, the important thing is that the Green Party will be extremely powerful in the new government and will have the portfolios that matter to climate progress. With environmental disasters beginning to befall Germany, as with last summer’s massive flooding, the Greens will be in a position to take advantage of shifts in public opinion toward greening the environment.