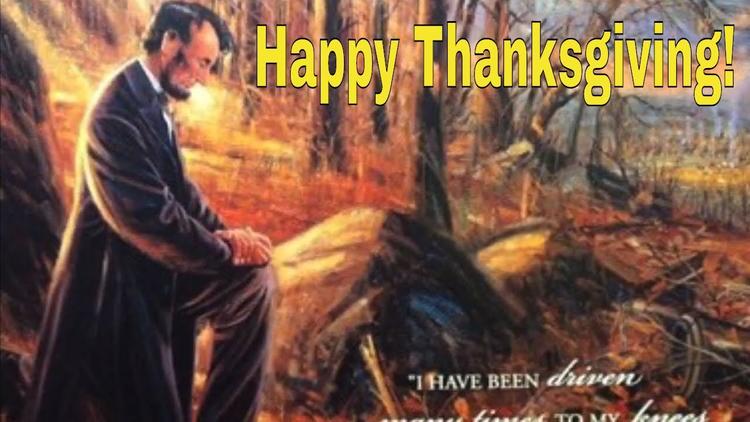 Ann Arbor (Informed Comment) – Thanksgiving Day, as is well known, was an invented tradition arising from the Civil War, promoted by Abraham Lincoln and his successors as a myth to unite the divided country. It doesn’t actually go back to the Pilgrims. There had been many Thanksgiving Days in the nineteenth century, at a local and state level. Lincoln was persuaded to make the day national. While Lincoln intended it to bring the country together, in its original form and intent it was an abolitionist notion and so proved divisive after 1865.

Christopher Kent Wilson argued that Thanksgiving Day was intended, in fact, as a renewal of the ideals of the American Revolution and as a restatement of the liberty that had been at its heart. That restatement was needed because, many in that generation held, America had fallen away from its commitment to freedom and rights. That was the point, he says, of the line in the Gettysburg Address that “Four score and seven years ago, our fathers brought forth on this continent, a new nation, conceived in Liberty.”

Many religious people in the North saw Lincoln’s Emancipation Proclamation on January 1, 1863, Jonathan Keller writes, as having restored to the North God’s grace. God, they believed, viewed slavery as an abomination. It was later that year that Lincoln declared a national day of Thanksgiving, which he repeated in 1864.

With Lincoln’s national proclamations, Janet Siskind writes, abolitionist pastors preached against slavery on Thanksgiving Day, as part of this sense of the need for a renewal of liberty. They saw Thanksgiving Day as the opportunity for a mulligan. It was Fourth of July without the slaveholders and the enslaved that made a mockery of Jefferson’s notion that all men are created equal.

“On special occasions the chaplains would be called upon to speak to the entire regiment. When the president set aside special days for prayer and fasting or for thanksgiving, the men would be ordered to a parade formation to hear the chaplain’s message. On Thanksgiving Day of 1863, the year of the Emancipation Proclamation, Chaplain Hunter preached on the text, “Thou crownest the year with thy goodness, and thy paths drop fatness” (Psalm 65: H).”

Precisely because Thanksgiving was so strongly associated with abolitionism and anti-slavery sentiment, it was rejected, Siskind writes, by white Southerners in the post-war years. Some African-Americans in the South celebrated it, well aware that it symbolized the expansion of the franchise and liberties to them.

Only when the white Southern elite managed to dismantle Reconstruction and banish African-Americans from full participation in civil politics did they finally acquiesce in the celebration of Thanksgiving Day. Siskind writes,

“Thanksgiving Day had become a firmly established and extremely significant annual national holiday, and the South joined the feast when Reconstruction ended. In Alabama, Governor Houston proclaimed 23December 1875 Thanksgiving ’to honor the replacement of a reconstruction constitution by a new document that restricted black participation instate government’ (Appelbaum, 1984: 164). Louisiana announced a special thanksgiving in 1877, when an all-white government was restored,and Georgia also celebrated thanksgiving upon the return of white supremacy (Appelbaum, 1984: 164).”

After the horrible events of 2020, including the murder of George Floyd and the widespread protests for an end to police violence and discrimination against African-Americans, we have an opportunity in 2021 to
reaffirm the original 1863 meaning of Thanksgiving. It not only was intended to unite a divided country but it was intended to be inclusive in an unprecedented way, finally encompassing African-Americans in the ideal of liberty announced in 1776. Thanksgiving should be the Fourth of July without the enslaved and the master. It should be a day of redemption and a restoration of divine grace, and day of penance for having gone astray into slavery and racism. We won’t be free and united as a nation until we undo the phony Jim Crow Thanksgiving of the post-Reconstruction period, which attempted to subvert Thanksgiving as a white holiday for and about whites.