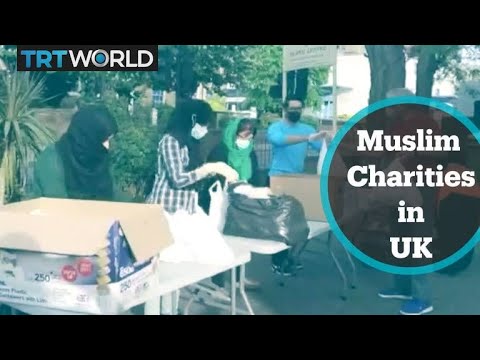 Muslims see wealth as a gift and a divine dispensation. The Quran urges individuals to share their wealth and income with those of lesser means. Almsgiving is one of the five pillars of Islam – a fundamental practice within the faith.

One key way this happens is through Zakat, the mandatory yearly donation of 2.5% of one’s net wealth. Islam requires all adults to give what they have in abundance to others.

In addition, Muslims may help others through other charitable practices such as sadaqa, which is mentioned in the Quran. Sadaqa is any additional giving that can serve this purpose of helping others. Shiite Muslims are expected to donate one-fifth of one’s annual earnings, known as khums, to their spiritual head, the Imam, for charitable purposes.

American Muslims constitute about 1% of the total population, and their average income is generally lower than non-Muslims. But because of Zakat and other practices, Muslims donate more to charity than others.

These charitable gifts can be invested for the community’s long-term benefit. Most of the Muslim world’s major mosques are funded by centuries-old endowments, known as awqaf. These endowments established education and social services for their communities long before the creation of modern nation-states.

An act of kindness

The ultimate earthly goal of Islam is the establishment of justice for all. Charity, then, is about more than just giving money.

Giving one’s time to help others – such as volunteering, caregiving or an act of kindness – can also be a form of charity.

The Quran describes charity as a “beautiful loan” and likens making a donation “to a grain (of corn); it grows seven ears, and each ear has a hundred grains.”

Muslims believe that charity benefits the giver, receiver and the public. Above all, it honors the divine commandment to help those in need.