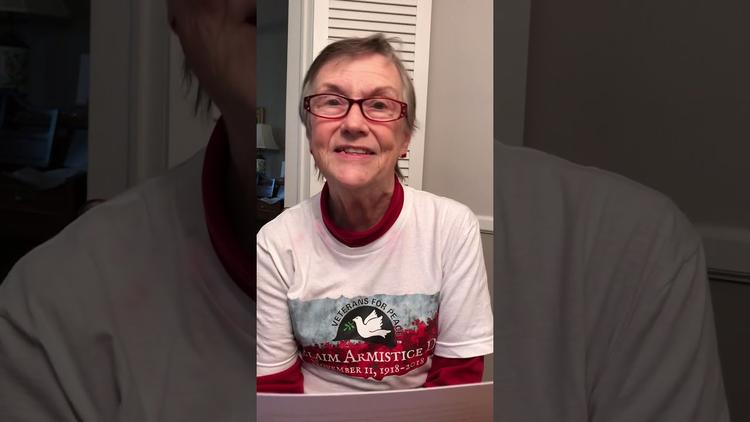 Greenfield, Mass. (Special to Informed Comment) – The first Armistice Day was a celebration of the moment – the 11th hour of the 11th day of the 11th month, 1918 – that the brutality of that first industrial war, which robbed 40 million soldiers and civilians of life, ended; and peace began.

On Veterans Day November 11, peace groups across the country, reclaim the original intent of Armistice Day: peace among nations through seeking peaceful, effective alternatives to war.

Veterans for Peace, made up of veterans of all wars since World War II and peacetime veterans, march in Veterans Day parades to honor the day’s original, nobler history. In doing so, they serve their fellow veterans by insisting that the best way to honor veterans is to stop creating more of them. Consider that today more veterans die through suicide than in war from “soldier’s heart,” shell shock, PTSD, combat guilt, and moral injury, as these war wounds of heart, mind and spirit have been variously designated since the Civil War.

In 1926 the US Congress declared an Armistice Day resolution calling for “exercises designed to perpetuate peace through good will and mutual understanding…inviting the people of the United States to observe the day in schools and churches with appropriate ceremonies of friendly relations with all other peoples.”

A 1914 soldiers’ truce foreshadowed the 1918 Armistice. World War I soldiers had only each other in the face of death – a reality incarnated in the 1914 Christmas truce spontaneously initiated by British, French, and German soldiers facing each other in trenches only yards apart. Soldiers on both sides lay down their weapons, crossed over barbed wire and shell holes, and greeted each other with their Christmas gifts of food, beer, champagne, and schnapps. Together they buried corpses of the fallen that lay in the narrow, no man’s land between them, played soccer with tin cans and straw-filled sandbags for balls, sang carols, took photos, and exchanged mementos and addresses. Their governments forbade soldiers to celebrate a Christmas truce in future years lest it weaken their willingness to kill each other.

The unique comradeship of war lingered in Erich Maria Remarque, who enlisted at 19 in the World War I German army. He admitted bitterly that a sense of the romance of war, propagated by the state’s total propaganda campaign, turned high school boys into willing recruits for slaughter. Some ten years after the war’s end, he published his first anti-war novel, All Quiet on the Western Front. In perhaps the most incisive moment of this novel, a young German soldier gazes upon a young French soldier he has killed and ponders their common humanity, with words that undercut the war’s hard-bitten hatred and national chauvinism. “Why do they never tell us that you are poor devils like us, that your mothers are just as anxious as ours, and that we have the same fear of death, and the same dying and the same agony.”

All public ideals of peace among nations were discarded on June 1, 1954, when the US government renamed Armistice Day as Veterans Day. This erasure of Armistice Day tragically matched our country’s history of militarism after World War II: bombing North Korea nearly out of existence and metastasizing into a pathological military industrial government complex that claims the lion share of our discretionary federal taxes.

In the past few years, China and Russia–each for different reasons–have risen in the purview of the Pentagon, President, and Congress to top place as threats to US security and superpower status in the world. A new cold war among the so-called great powers, threatens to become a hot war, especially with China, while diplomatic intelligence and wisdom are in extremely short supply. Yet, these are the very countries with which we must negotiate radically reducing climate emissions to avoid an unstoppable global climate breakdown.

Let us reclaim November 11 in its original purpose: a day dedicated to the cause of world peace. Our most respectful act for soldiers, future veterans, and life on Earth, is to end war for good.

This is not a pipe dream. On June 10, 1963, President Kennedy publicly called for an end to the Cold War with the Soviet Union; his assassination foreshortened his goal. Consider that European nations, twice engaged in a bloodbath in two world wars, are now the European Union, which was awarded the Nobel Peace Prize in 2012 for transforming “Europe from a continent of war to a continent of peace.”