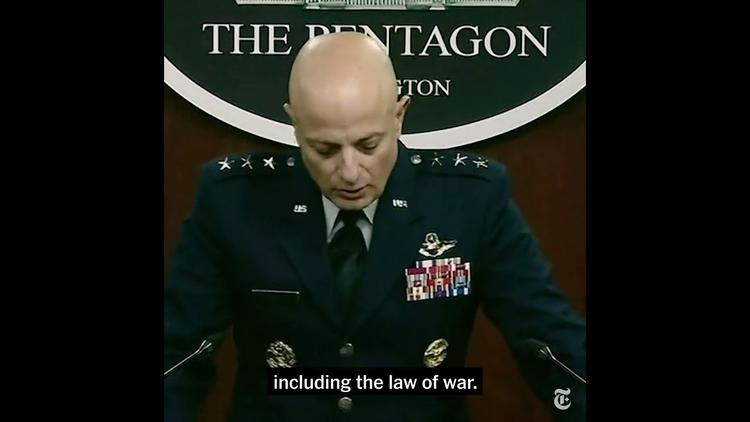 Ann Arbor (Informed Comment) – Paul Handley of AFP reports that the US Air Force Inspector General, Lieutenant General Sami Said, found that a drone strike that mistakenly killed 10 civilian non-combatants, including 7 children, in Afghanistan on August 29 violated no laws, including the law of war.

When Napoleon had the royalist Duc d’Enghein assassinated in 1804, Talleyrand is said to have observed, “It was worse than a crime, it was a mistake.”

The same sentiment, whether originally expressed by Talleyrand or someone else, seems to apply here.

One of the reasons that the United States refuses to join the International Criminal Court at the Hague is that Washington does not want such assessments to be double-checked in an impartial tribunal.

Gen. Said’s reasoning is that no one involved thought civilians would be killed. The target was a white Toyota of a sort US intelligence believed the ISIS-K terrorist group intended to use as a car bomb, but field agents tailed the wrong white Toyota. This one belonged to an aid worker. The Toyota was targeted while sitting outside a house. Gen. Said says that the drone targeting personnel believed the house was empty. A child came out of the house toward the Toyota to greet his father 2 minutes before the launch, and while this event was caught on video, no one noticed it and they still fired the drone.

US intelligence indicated that a bomb would be brought to the driver of the white Toyota in a computer bag, and American field agents witnessed him receiving a computer bag. In reality, it was just a computer bag.

In the law of war you are not allowed to take a shot if you think it will kill or injure a lot of civilian non-combatants. Here, the Inspector General concluded that intentions were pure, since the targeting team believed the people in the car were militants and that the house was empty. In fact, they blew up a car full of innocent civilians and also the family members in the house, including children.

At least in civilian law, I would say we have here a case of criminal negligence.

I mean, really, this tragedy resulted from a series of monumental screw-ups and I hope somebody’s career suffers for it, at least. They trailed the wrong car! They couldn’t tell the difference between a laptop and a bomb. They declared a building empty that had a whole family in it. They killed an aid worker while trying to target terrorists. They seem to have had some (bad) human intelligence, but I suspect that some of the mistakes were from relying too much on signals intelligence.

But if you started charging military personnel with criminal negligence for what they call “collateral damage,” you’d empty out the Pentagon and make war impossible. In many ways the entire Iraq War was criminal negligence on the part of the Bush administration.

The August 29 mistake cost the United States enormously in public opinion in the region. Even the mainstream Turkish paper Haberturk ran a column speaking of how cruel the Americans had been to dismember their own aid worker in this way, which also expressed skepticism that the US would take in very many Afghan refugees (what with us being such cruel people). This, according to BBC Monitoring.

The Iranian press maintained that the Pentagon would never even have admitted that the Kabul strike was an error if it had not been for a detailed New York Times investigation. They are deeply skeptical of US military intentions in the Middle East to begin with, but this strike made us look sinister and incompetent all at once.

Since the US government has started relying so much on drone strikes, as it has reduced its military footprint in the Greater Middle East, we need to know that the drones are hitting legitimate targets. If the drone operators can’t do better than this, we should cease using the things.

Afghanistan: Surveillance showed a child in Kabul 2 mins before the U.S. drone strike that killed 10