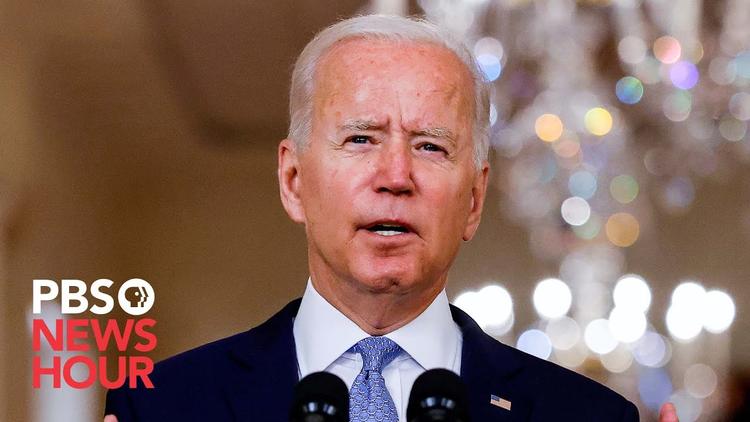 Ann Arbor (Informed Comment) | – On Monday, President Joe Biden addressed the UN COP26 climate conference, declaring the 2020s the “critical decade.” It was a strong and hopeful speech that showed global leadership that has been sorely lacking.

Those carping about Biden’s performance seem not to remember the past four years when the president of the United States was a fascistic clown who ludicrously denied that there was any such thing as global heating, calling it a Chinese hoax, and knee-capped green energy in the US with severe tariffs on imported solar panels, and maintained that wind turbines caused cancer.

If Trump had won or had succeeded in his coup, the US would be massively ramping up its carbon emissions, not seeking to cut them in half.

Biden is still trying to get $500 billion in green energy spending and incentives from Congress, which would be the most massive pro-climate legislation in American history.

Biden pulled no punches about the irresponsibility of the leader of the Republican Party:

“And I guess I shouldn’t apologize, but I do apologize for the fact the United States, in the last administration, pulled out of the Paris Accords and put us sort of behind the eight ball a little bit.”

As eminent climate scientist Michael E. Mann has argued, climate pessimism is the new denialism. We get positive change by being dogged but optimistic (that is a general life lesson, by the way; optimists have been found by psychologists to be more successful in life and in business than pessimists). Let’s be optimistic that Biden can get at least some of his agenda into place. The Ray Bradbury story about the butterfly effect works both ways. A small positive change now can also produce enormous alterations in our future, for the better.

It is true that Biden has been dealt a weak hand in Congress, but that is the fault of American voters who packed that body with Republican climate change-Denialists, none of whom is willing to vote for green legislation. And that includes figures from states with very substantial numbers of wind farms such as Iowa and Texas. That is, they are turning down subsidies for a key industry in their own states because they are being bribed to betray their constituents by Big Oil. That the corporate press manages to focus all the attention on Democratic Party negotiations without managing to mention that those negotiations would not be necessary if even one Republican in the Senate would step up and do the right thing is an astonishing dereliction of journalistic responsibility.

It is also true that the courts ruled that Biden has to allow some sorts of new oil exploration. Not his fault, but that of court judges who are trying to kill their grandchildren. Nevertheless, you see headlines in the for-profit press blaming Biden.

It is true that the Russian and Chinese leaders did not show up at COP26 and that India is moving its goalpost for concerted climate action to 2070, by which time it will be “game over” for avoiding some of the consequences of pouring billions of tons of greenhouse gases into the earth’s atmosphere annually. Also, none of these developments is Joe Biden’s fault. They are in some important part the fault of Donald Trump, who gave polluters license to pollute by pulling the US out of the Paris Climate Accord. Why should other countries sacrifice if America won’t?

We already know who the CEO of AT&T, ultimate owner of CNN, wants in the White House, since he built up the far, far right wing OAN channel. The only thing AT&T didn’t do was to broadcast it in German.

So since few other news outlets will do so, let us consider what Biden actually said.

Biden asserted that US leadership on the issue is back, after being AWOL for four years.

“As I said earlier today, we’ve set ambitious goals of reducing U.S. greenhouse gases emissions by 50 to 52 percent below 2005 levels by 2030. That’s a goal line with limiting global warming to 1.5 degrees Celsius. But the math only works if every country does its part and those countries that don’t have the wherewithal get the kind of help they need.

Every major economy needs to enhance its Paris targets, in my view, to a level that will keep our goal within reach. And then — and then continue to raise our standards. Developing economies need to take meaningful mitigation adaptation actions as well, but they’re going to need help.”

So Biden set a very specific and attainable goal for the U.S. Personally, I think he will be a two-term president and it is not impossible that he will find the means to accomplish it. Public opinion is swinging against fossil fuels in the US, and Hertz just ordered 100,000 Teslas in a major market signal of what large companies think the near future of transportation is.

Biden continued, “Our success, in my view, hinges on our collective commitment to ramping up our momentum and strengthening our climate ambition, advancing concrete actions during this decade to keep the 1.5 degrees Celsius goal within our reach and be realistic.” Again, he is setting a specific goal.

Another such goal: “at the U.N. General Assembly, I announced our intention to work with our Congress to quadruple our climate financing by 2024, including support for adaptation.”

He announced a whole new green government program: “But, today, I’m announcing also the Presidential Emergency Plan for Adaptation and Resilience. And although I tried to re- — I try to — very hard to resist acronyms, they came up with that because — so they could say, “PREPARE.” (Laughs.) That’s what we’re calling it. But — but PREPARE will serve as a comprehensive framework to mobilize the U.S. government resources and expertise in support of climate adaptation efforts for more than a half a billion people worldwide.”

PREPARE isn’t just for the US, though you might remember that New Orleans and other US cities need help with adaptation to our new, soon-to-be subtropical climate. Biden is offering to help the Global South, which did the least to provoke global heating but will suffer the most:

“We’re going to invest in creating an early warning system and expanding clean energy; and build a WaterSMART infrastructure for drought, supporting sustainable forestry and agriculture; and helping nature to work to reduce the climate change drivers and impacts; and protecting critical infrastructure, enhancing resilience of vulnerable nations in the face of a wide range of climate impacts . . . we’re also launching a net-zero world initiative to help share the technical expertise of the United States — its world-class national laboratories — and the speed and support to transition of — for developing countries to energy systems that are affordable and reliable and clean.”

Biden underlined again that the energy transition is necessary to address the climate emergency, but it is also an opportunity to create millions of well-paying jobs and improve infrastructure in the US and around the world.

Not a word about wind turbines causing cancer or global heating being a Chinese myth.

Biden is the first president to take the climate emergency seriously as an emergency. He has many levers of power to begin turning the USS America around on this issue, and if he can get us headed in the right direction, that will have enormous downstream impacts on our future and the future of the globe.