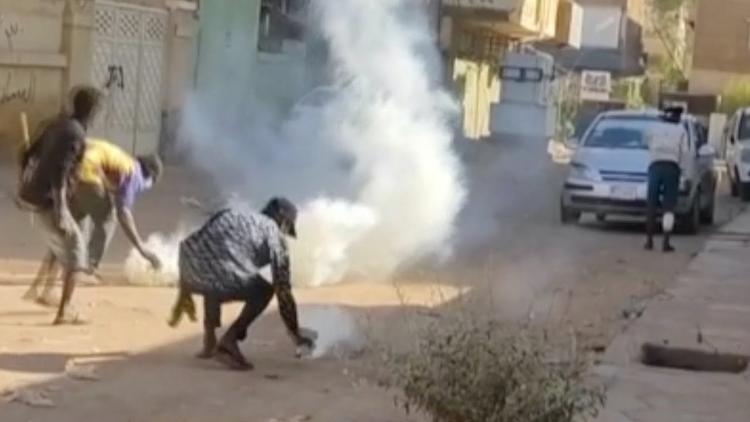 The Sudanese people have made up their mind to defy the 25 October coup, and there is no way back

(OpenDemocracy.net) – Sudan’s coup on 25 October was both highly anticipated and inevitable. For three months, tension between the civilian and military partners that had ruled Sudan since the 2019 powersharing deal had been intensifying.

After the 2019 revolution and the fall of former president Omar al-Bashir, political parties and civil rights groups in Sudan reached an agreement to share power. The constitutional document signed in August 2019 also gave the military a share of power in the sovereign council governing the country with limited executive power.

The transitional period that resulted from the agreement was designed to avoid the bloody paths of other uprisings, most notably in Libya, Syria and Yemen. Civilian leaders hoped for a smooth transition, protected by strong international support, and a partnership that could sideline the military’s desire for unilateral rule. But the reality proved to be different.

The coup was not a surprise. In fact, many groups, including resistance committees, professional unions and youth groups, had been warning for months about early signs of a military takeover. On 21 September, Sudan witnessed a failed coup attempt that was considered by many as an early test for the real one to come a month later. Sudanese women’s rights groups published statements and organised protests demanding civilian rule and condemning the military’s attempts to take power.

The attempted coup was followed by a crisis between the Forces of Freedom and Change (FFC), the main civilian political coalition, and the military, most notably represented by the military chief Abdel Fattah Al-Burhan and the leader of the Rapid Support Forces (RSF), Mohamed Hamdan Dagalo, known as Hemedti.

Since its independence in 1955, the country witnessed three revolutions, followed by three military coups

The FFC and Sudanese civil society groups, including women’s rights groups and resistance committees, criticised the statements of the military that followed the attempted coup. On 30 September, countrywide protests led by women’s and youth groups erupted against the military attempts to seize power, refusing the return of the former Islamist regime.

The protests reflected the high level of political consciousness among the Sudanese since the 2019 revolution. Protesters used the slogan #NoWayBack, expressing their determination not to allow history to repeat itself.

After all, Sudan’s revolution brought to an end a vicious cycle of military rule that had lasted over six decades. Since its independence in 1955, the country witnessed three revolutions, followed by three military coups, in 1958, 1969 and 1989.

When the weak civilian government established after the 2019 revolution was toppled by a new military coup on 25 October, the reaction was immediate.

By dawn the following day, Sudanese people were on the streets, united in their demands that the military give up power and stop interfering in the country’s political life.

North Africa, West Asia in your inbox | Sign-up for weekly highlights, recommendations and stories selected by our editors

The unity of the Sudanese people towards a single goal has never been achieved so easily before. It didn’t happen because of the high levels of coordination between different groups, but because of the shared hope of building a civilian government and ending the failed rule of elite old men, whether civilian or military.

The two-year transitional period was full of failure and struggles, but more importantly, it was also full of debates: heated public discussions about the present and the future of a country long torn by civil wars and divisions. These debates were not given the time to mature and lead to the creation of new institutions or leaderships, but they were enough to demonstrate the type of government most Sudanese people want: a civilian government.

The protesters on the streets of Sudan’s villages, towns and cities are not just defying Al-Burhan and Hemedti. They are fighting the ghosts of the past, and the old traditions and political practices that are dominating our present.

Resistance committees, youth groups, women’s groups, professional unions and political parties are leading the protests. But the new leadership is highly diverse and grassroots-based, providing the best representation of the social and political complexity of a country made up of dozens of tribes and languages.

The young generations leading the revolt have managed to create their own language, their own visions, and their own way of leading. Take Randok, a street language created by the displaced young men from conflict areas, mostly non-Arabic speakers, who found themselves homeless on Khartoum’s streets since the 1990s.

In a country that was under military rule for six decades and witnessed 50 years of civil wars, a genocide and division, the only way out is through radical change

This language has been widely adopted by the younger generation over the last decade and used as a tool to resist the oppression of the former regime by students and artists. During the 2019 revolution it was used to pass coded messages to young protesters. This widespread adoption of a language of marginalised homeless people affected by war gave rare recognition to parts of Sudan’s population who are usually forgotten. It was also an indication of the deep desire for fundamental change in the country.

Protesters today are not demanding a return to the situation before 25 October. Women and youth groups, along with the resistance committees, are seeking more fundamental changes. They are ready for a new revolution, if needed, to avoid another coup in the future. Young people want a clean break with the country’s troubled history and the failure of its powerful elite. This can only be achieved with complete civilian rule and the ending of the military’s interference in politics.

The road towards such change is long and difficult. But it’s important to recognise the legitimacy of these demands. In a country that was under military rule for six decades and witnessed 50 years of civil wars, a genocide and division, the only way out is through radical change.

And because we have been through it all in Sudan, we know that compromises are not the solution.

The seven demands announced by resistance committees on 30 October are laying the ground for the future political agenda in both the short and long term.

The demands focus on the demilitarisation of the state, the release of detainees, ensuring accountability for the crimes of the coup leaders, and building civilian institutions like the parliament.

Most importantly, protesters have made it clear that they will not negotiate, compromise with, or enter into a partnership with the coup leaders. Some experts and diplomats consider these conditions unrealistic, but the demands are aimed at avoiding any possibility of giving legitimacy to the coup leaders.

The Sudanese people have already made up their mind to defy the coup, and there is no way back. If the international community is truly committed to democracy, it must stand with the people of Sudan and support their demands.

Nazik Awad is a woman human rights defender from Sudan, living in exile. She is also the founder of the Sudanese Women Human Rights Defenders Project.

CGTN: “Sudan protesters march against use of force by police”