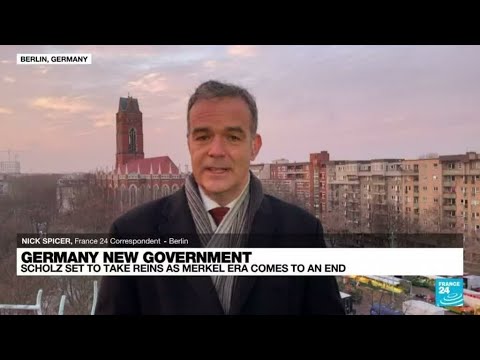 ( Clean Energy Wire ) – The new German government’s plan to more than double power production from renewable sources by 2030 presents a “gigantic task” for the country, said Chancellor Olaf Scholz in his first government declaration in the Bundestag (national parliament).

“However, I am firmly convinced that we will succeed,” he added. Scholz laid out his government’s plans for the coming four years, sticking firmly to the promises from the coalition treaty of his Social Democrats (SPD), the Green Party and the pro-business FDP.

He said climate action would become a central task which cuts across policy departments in his government. “We want to be measured by how successfully we solve this task.” Scholz spent much of his more than one hour-long speech on Germany’s planned transition to climate neutrality by 2045. “Behind us lie 250 years in which our prosperity was based on the burning of coal, oil and gas. Now we have about 23 years ahead of us in which we must and will get out of fossil fuels.”

To succeed in this, the government would ring in a “decade of investments in the future”, said the chancellor. “It is about laying the foundations for a new technological era, from hydrogen pipelines to decentralised power supply and electric charging stations.”

The new German government coalition took office in early December and laid out its plans to get the country on a path to climate neutrality in line with the 1.5°C global warming limit of the Paris Agreement. How to finance climate action is a key issue for the coalition. Analysts deem the renewable capacity targets that the government has set for 2030 very ambitious – as well as the objective to secure 80 percent of power demand from renewable sources at the end of the decade.