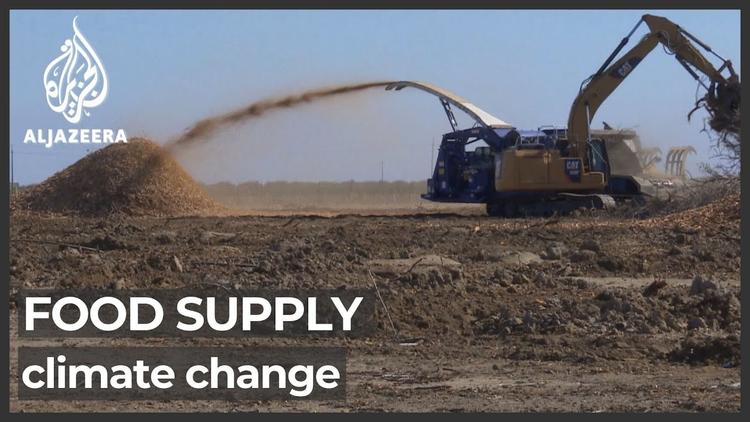 In a world with an increasing human population, climate change may have a serious impact on our ability to grow enough food.

Research from as far back as 2007 found that around 30% of year-to-year fluctuations in tonnes of crops grown per hectare were due to changes in the climate. It is remarkable under these circumstances that the global agricultural system has managed to remain fairly robust, and that major food shortages have been rare.

On the other hand, food prices in recent decades have become increasingly volatile. While there are many influences on food prices – including crop yield, weather variations, international trade, speculation in food commodity markets, and land management practices – mostly open trading systems have allowed food shortages in some places to be offset by surpluses, and increased production, elsewhere.

Now that the world seems to be moving toward more trade barriers at a time when climate change is intensifying, these stabilising effects may start to fail. Prices could rise sharply, putting pressure on poor countries and on the budgets of poor people in rich countries.

While crop growth per hectare has increased considerably over the last 50 years, recently the rate of this growth has slowed compared to previous decades.

Recent research suggests that up to 30% of the expected increase in growth of European crops has been cancelled out by adverse weather.

But it is worrying that the most pronounced changes tend to be in countries, such as those in sub-Saharan Africa, including South Africa, that are at high risk of climate impacts on food availability and affordability.

This is particularly clear in the case of barley, maize, millet, pulses, rice and wheat. It seems that the countries most at risk of food shortages are also worst affected by rising temperature. This seems to bear out the finding from the world’s premier climate science advisers, the Intergovernmental Panel on Climate Change (IPCC), that the higher average global temperatures and more extreme weather events associated with climate change will reduce the reliability of food production. The latest IPCC report also supports these conclusions.

Another change noted by the IPCC is how rising heat and rainfall associated with climate change is increasingly degrading land, making soil less productive. This is due to the loss of soil nutrients and organic matter and has negative effects on crop yields. In addition, accelerating rises in sea levels will compound these negative impacts by increasing saltwater intrusions and permanently flooding crop land.

Recent modelling of soil loss in wheat and maize fields shows large variations between tropical climate regions and regions with a large proportion of flat and dry land, with losses ranging from less than 1 tonne per hectare in central Asia to 100 tonnes per hectare in south-east Asia. The strong impact of climate and topography on simulated water erosion is clearly shown in the five largest wheat and maize producing countries: in Brazil, China and India, where a large proportion of cropland is in tropical areas, water erosion is relatively high, while in Russia and the United States annual median values are much lower.

However, historically poor management of lands in Europe and the US has been largely remedied through the increased use of chemical fertilisers and irrigation, which has been able to offset a massive amount of soil degradation. For example, one study has shown that, without fertiliser, US yields of corn over the past 100 years would have fallen from around seven to a little over one tonne per hectare, due to soil quality decreasing. However, fertiliser has enabled yields to be broadly maintained, although at an annual cost to farmers of over half a billion dollars.

These results have worrying implications for poorer parts of the world where soil quality is decreasing, but which do not have the resources to compensate for this with fertilisers. And the results become more worrying still if this is exacerbated by climate change.

Many aspects of land management for food production have changed in recent decades, including growing different crops, or the same crops in different places, in response to increased temperatures. The overall result of these changes has been greatly increased food yields in many parts of the world, and land managers may be expected to adapt their strategies for changes in the climate.

But if climate change results in simultaneous failure of major crops such as wheat, maize and soybeans in two or more major breadbasket regions (the areas of the world that produce most food) then the risks of price rises making food too expensive in poorer parts of the world could become acute.