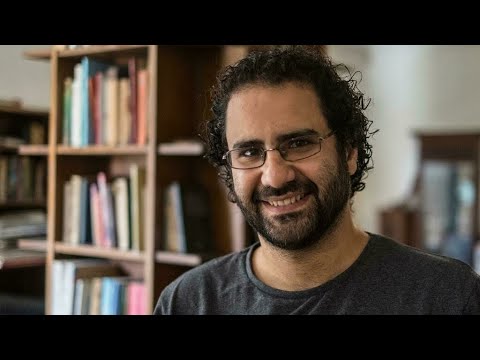 “The egregious miscarriage of justice handed down by this exceptional court to punish peaceful expression reveals how Egypt’s justice system has itself become a tool of repression,” said Joe Stork, deputy Middle East and North Africa director at Human Rights Watch. “The court should overturn the verdict and release Abdel Fattah, al-Baqer, and Ibrahim immediately.”

Family members of activist Alaa Abd al Fattah reported being denied entry to the courtroom. The Arab Network for Human Rights Information, Mohamed Ibrahim’s legal representatives, said that security forces would allow only two people for each defendant in the courtroom.

The trail was rife with fair trial and due process violations. Lawyers for the defense never received a copy of the approximately 2,000-page case file and were only allowed to view the document in the presence of the State Security Prosecution. The trial included only three court sessions, and defense lawyers were not allowed to present arguments.

On December 20, a verdict is expected in the case of Alaa Abdel Fattah, an activist; Mohamed al-Baqer, a human rights lawyer; and Mohamed “Oxygen” Ibrahim, a blogger, who are charged with ““spreading false news undermining national security.” .” On December 15, the trial for 31 members and alleged members of the Egyptian Coordination for Rights and Freedoms (ECRF), a prominent Egyptian rights group, was postponed until December 26.

“Trials of human rights defenders and peaceful critics in these special courts for peaceful dissent constitute a grave injustice because the President’s broad authority over these courts undermines their independence and impartiality,” said Joe Stork, deputy Middle East and North Africa director at Human Rights Watch. “The government’s rush to use emergency courts before declaring the end to the state of emergency, after holding people illegally for years in pretrial detention, confirms that fierce repression of peaceful critics remains the order of the day in Egypt.”

At least 48 unjustly detained rights defenders, activists, and opposition politicians who had languished in pre-trial detention for months and years were referred to the emergency courts for trial just before the president lifted the state of emergency. The move indicated the government’s determination to subject these detainees to the exceptional rules of these courts.

The courts are established under Egypt’s 1958 Emergency Law, which allows these courts to continue to oversee previously referred trials even after a state of emergency has been lifted. New cases can no longer be referred to these courts once a state of emergency has ended. The Emergency Law grants the Presidentpresident, or someone he delegates, the authority to ratify or annul rulings and reduce sentences, undermining the independence and impartiality of these courts. The President president also has broad authority to appoint judges of Emergency State Security Courts and control their composition.

In October 2017, Prime Minister Sherif Ismail issued decree 2165 of 2017, placing many speech- related offenses within the jurisdiction of the Emergency State Security Courts, including the charge of “spreading false news.”

Abdel Fattah, al-Baqer, and Ibrahim were arrested in September 2019 and held in pretrial detention for over two years, exceeding the maximum under Egyptian law. Lawyers and family members told Human Rights Watch that they found out the case had been referred to the Emergency State Security Court for trial on October 15, 10 days before President Sisi announced the end to the nationwide state of emergency.

Those recently referred to emergency courts include Ezzat Ghoneim, executive director of the ECRF, who was arrested and forcibly disappeared in March 2018. Khaled Diaa, attorney general for the Supreme State Security Prosecution, referred him along with 30 other defendants in that case to an Emergency State Security Criminal Court on August 23. Diaa also referred Abd al-Moniem Abu al-Fotouh, former presidential candidate and head of the Strong Egypt party, to the emergency courts for trial on August 25. He had been in pretrial detention since February 2018. Ziad al-Elaimy, a former member of parliament, was referred to the emergency courts on July 25. He had been in pretrial detention since June 2019.

The emergency courts’ verdicts are not subject to appeal before a higher court, but require final approval by President al-Sisi or someone designated by him.

The International Covenant on Civil and Political Rights, ratified by Egypt, guarantees the right of everyone convicted of a crime to appeal the decision and have their conviction and sentence reviewed by an independent judicial body. The Principles and Guidelines on the Right to a Fair Trial and Legal Assistance in Africa state that an entitlement to a higher judicial body is one of the “essential elements of a fair hearing.”

“The referral of these cases to emergency courts for trial – immediately before the end to the nationwide state of emergency – is a blatant attempt by the Egyptian government to undermine justice for these well-known activists and politicians,” Stork said. “This legal manipulation reveals the travesty of Egypt’s justice system when it comes to political dissent.”

The Emergency State Security Court trial of Alaa Abdel Fattah, Mohamed al-Baqer, and Mohamed Ibrahim has been marred by numerous fair trial and due process violations. Family members of Abdel Fattah told Human Rights Watch that his lawyers were only able to view the case files in the presence of the State Security Prosecution, and that the court consistently ignored their repeated requests for a copy of the approximately 2,000-page document. Announcement of a verdict in the case has been scheduled after only three sessions for December 20.

All three have faced horrific prison conditions in Tora Prison Complex. A statement his family released on October 9, 2019, said that Abdel Fattah had been “slapped and kicked as he passed the prison door, was told to strip to his underwear, then forced to walk down a corridor of people who beat him on his back and his neck.” His family told Human Rights Watch that authorities have denied him access to reading materials, radio, and the prison library as well as recreational time outside of his cell.

The Arab Network for Human Rights Information (ANHRI), Ibrahim’s legal representatives, told Human Rights Watch that the authorities have deprived him of visits by his lawyers and family since February 2020. The group reported that after he attempted suicide in August, his lawyers were not able to visit him to “determine the extent of his physical, mental and psychological well-being.” Even after his lawyers obtained an official permit, prison officials refused to allow them to visit Ibrahim at Tora prison.

Egyptian Coordination for Rights and Freedoms

On September 11, the day President al-Sisi issued Egypt’s “National Strategy for Human Rights,” a security court trial began for Ezzat Ghoneim, the group’s executive director, and 30 others allegedly associated with the organization on charges of leadership, membership, funding, or support of a terrorist organization. Seventeen of them are being tried in absentia.

The Supreme State Security Prosecution also accused Ghoneim and three other defendants of using the group’s Facebook, Twitter, and YouTube accounts to document and expose “alleged involvement of the police in arbitrarily detaining people; killing, torturing and mistreating others; and deliberate medical negligence of prisoners.” The order also accused the four of criticizing judicial authorities for “issuing of death sentences without evidence” and the “lack of fairness guarantees in criminal trials.”

Egypt’s National Security Agency arrested Ghoneim in March 2018 and refused to disclose his whereabouts to family and lawyers, forcibly disappearing him, for three days. After a judge ordered Ghoneim’s release on September 4, 2018, the authorities forcibly disappeared him for nearly five months.

Ten Egyptian human rights organizations on September 9 urged the authorities to immediately release the organization’s 14 defendants in custody, stressing that the exceptional courts “fall far short of minimum fair trial guarantees” and said that the charges are “at the heart of legitimate defense of human rights, both a right and a duty.”

In June 2019, the authorities arrested Ziad al-Elaimy, a former parliament member, and Hisham Fouad and Hossam Mo’nis, both journalists, after they planned to form a political coalition to run in the 2020 parliamentary elections.

Lawyers told Human Rights Watch that the case was referred to an Emergency State Security Court for trial on July 25 after they had been held in pretrial detention for over two years. On November 17, an Egyptian Emergency State Security Misdemeanor Court sentenced al-Elaimy to five years in prison and Fouad and Mo’nis to four years on the charge of “spreading false news.” There has been no indication that President al-Sisi has ratified the ruling.

Egyptian authorities in February 2018 arrested Abd al-Moniem Abu al-Fotouh, a 2012 presidential candidate and head of the Strong Egypt Party, on charges of “spreading false news” and “leading an outlawed group” and held him in pretrial detention for over three years. On August 25, the authorities referred his case to an Emergency State Security Criminal Court for trial, which began November 24.

Security forces arrested Abu al-Fotouh a few hours after he returned from London, where he gave interviews to several media outlets, including Al Jazeera, BBC Arabic, and Al Araby TV, criticizing President al-Sisi and what he said was an “environment of fear” surrounding the 2018 presidential elections.

The 69-year-old former presidential candidate has been kept in solitary confinement in Tora Prison. His family reported that he suffered symptoms resembling a heart attack in July. He sought help for hours from the prison guards with no response, his family said.

Prolonged solitary confinement amounts to inhuman or degrading treatment, and can amount to torture under international legal standards.

Abu al-Fotouh suffers from a number of medical conditions predating his detention, including hypertension and diabetes, and developed a herniated vertebral disc while in prison. The authorities prevented him from undergoing prostate surgery that was scheduled before his arrest.

On December 12, during a detention renewal court session, his lawyer, Ahmed Abo Elela Mady, said that Abu al-Fotouh’s health was deteriorating owing to his solitary confinement.