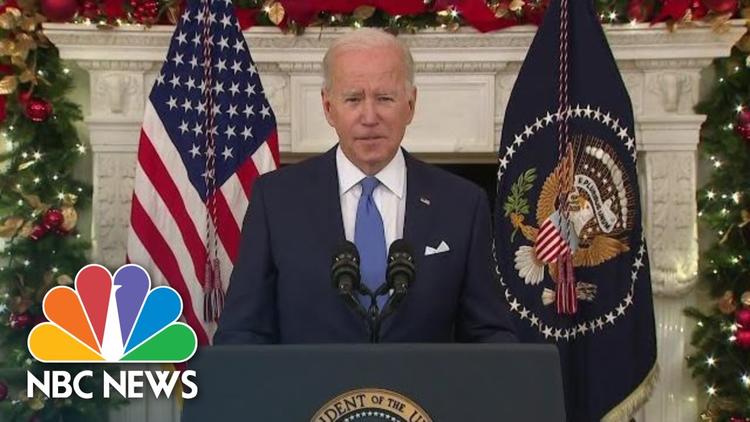 Ann Arbor (Informed Comment) – President Biden made a major pandemic policy speech on Tuesday, pleading with Americans to get vaccinated, and, indeed, to get the three-shot course that is now standard. He notes that 400,000 people died from COVID-19 in 2021, almost all of them unvaccinated. He is backed up by medical professionals. Augusta University looked at US statistics for last May and found that during that month, 98% to 99% of those who died from COVID were unvaccinated.

President Biden is not getting due credit for his incredible feat of vaccinating 200 million Americans. If the other eligible tens of millions had followed suit, the pandemic would have subsided in this country. The Commonwealth Fund finds that without Biden’s vaccination drive, a million and a half Americans would have died this year. As it was, 400,000 died. But there would have been 1.1 million more if Biden had not swung into action. That would have been 21,000 deaths a day. The worst actual one-day total, in January 2021, was 4,000, but that was before the delta variant, which was twice* as transmissible and twice as deadly as alpha.

Biden was the one who mobilized vaccinators from the military to cover a civilian medical shortfall. He was the one who mandated that companies with 100 or more employees had to require vaccinations. He provided the logistics, and he dragooned industry into it.

As he noted, his mandate is unpopular, and Republican governors sued him over it. Alabama, Florida, Mississippi, and Tennessee had the highest death rates in the US from COVID this year, and Mississippi has a vaccination rate of 47%. Its death rate was worse than Peru’s, and its Republican leadership has refused to do anything about it.

I have heard no one in the US press, no one among the cable TV talking heads, point out that Biden’s steps saved 1.1 million American lives. It is almost as though the big for-profit news corporations have CEOs who vote Republican.

That’s not all. Without Biden’s vaccination program, an additional 10 million Americans would have been hospitalized in 2021, according to the Commonwealth Fund.

I don’t think it is easy to understand the scale of that catastrophe. There are only 919,000 fully staffed hospital beds in the United States. Spread over the year, 10 million would have been nearly 200,000 hospitalizations a week in the United States. That is nearly 1/4 of all the beds! And it isn’t like people would stop getting sick from other causes. Last week’s average was about 54,000 hospitalizations from COVID. At nearly 4 times that, there would not have been the beds in many hospitals. People would be stacked up on gurneys in hospital parking lots.

People who are not good at statistics sometimes point out, maliciously, that slightly more people died from COVID-19 under Biden’s watch than under Trump’s. They neglect to take into account that the delta variant entered the United States in March, and that it spreads around 10 times as fast as the old alpha variant did, and is 1.8 times as likely to put you in the ICU or kill you. Now we have the omicron variant, which is ten times more transmissible than delta, and so is replacing it. By a stroke of luck, early indications from Australia are that it is half as deadly as delta.

I admire journalists, but for-profit news has a serious problem with sensationalism. There are so many stories about so-called breakthrough infections and people dying of them, which don’t do a good job of telling people how effing rare that is. First of all, let’s lose the “breakthrough infection” term. We don’t use it with other diseases. Many of us get flu shots and sometimes you still get the flu. Nothing is perfect. The question is how likely it is. With people who have the three-shot regimen of Pfizer or Moderna it is extremely rare. But the newspapers keep putting breakthrough infections in their headlines, to get eyeballs and make money. It likely has the side effect of discouraging some people from getting vaccinated.

Biden isn’t done fighting this thing. He just made the tests free, a long overdue step. Now that his mandate to businesses has been upheld by the court, you will see millions more workers get vaccinated even in the deep south. The vast majority of people who threaten to quit over such mandates don’t follow through. People like getting their paycheck, and people can see in their workplace that the vaccines are safe and that their coworkers stop getting sick.

In South Africa, at least, the omicron wave subsided pretty fast. It spreads along networks, and runs into dead ends. In the US there are even more dead ends, since Biden vaccinated 200 million. There will likely be an omicron booster from Pfizer and Moderna by April, and their pills are also coming on the market. There is hope that things really will settle down by spring. But of course unless the industrialized world gets serious about vaccinating the whole of humankind, the potential for new variants remains.

—
*an earlier version of this post said that Delta was 10 times more transmissible than Alpha. Informed Comment regrets the error.