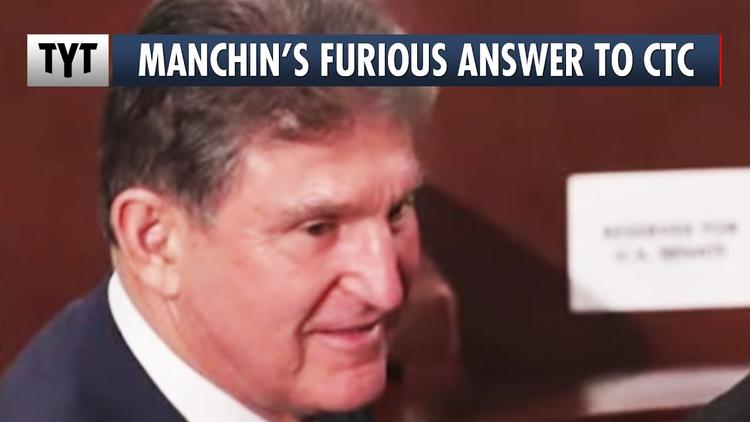 One multimillionaire senator has the power to decide whether millions of kids — including mine — stay out of poverty.

( Otherwords.org) – I work hard to make ends meet for my family. But as an educator in West Virginia, that’s hard sometimes — especially with child care to pay for.

Fortunately, the expanded Child Tax Credit that Democrats passed this spring has been a lifeline. Those monthly payments mean that my child has food, a roof, electricity, and heat. It means I have less stress and can be a better mother. And it means I can stay employed because I can afford child care.

Across the United States, 65 million children and families like mine are getting these monthly payments of up to $300 per child — including nearly every child in West Virginia, whose children are

Unfortunately, unless Congress passes the Build Back Better Act now, those payments will expire before the year is out.

Not one Republican lawmaker on Capitol Hill supports extending tax relief for everyday Americans — even though they had no trouble passing trillions in tax cuts for the wealthiest Americans when Trump was in power.

Democrats are working on extending these payments to ordinary families without Republicans. But one of their own keeps standing in their way: my senator, Joe Manchin. So far, Manchin has joined his Republican colleagues in refusing to support tax relief for the rest of us.

In my frustration, I can’t help but wonder how a multimillionaire like Manchin — who could spend $300 on lunch on a Tuesday if he felt like it — could understand what that $300 a month means for a family like mine.

This is more than lunch for us. A recent survey found that nearly all of the families of the 65 million children who get the enhanced Child Tax credit benefits have used them for essentials like food, school, rent, and utilities.

These payments kept over 3.5 million children out of poverty in the month of October alone. And nationally, they’re expected to reduce the number of children living in poverty by at least 40 percent once all the benefits are realized.

That means we need this. It isn’t extra. It isn’t optional.

It would also, for the first time, guarantee four weeks of paid sick leave for American workers to care for themselves, a child, or parent when they’re ill — another provision Manchin has vehemently opposed.

But there’s a critical difference between Manchin and his Republican colleagues: Manchin has the power to pass or sink the bill.

A multi-millionaire politician funded by corporate coal interests has the power to push my four-year-old little boy and me off the economic cliff at the end of this month. Or he can pull us back from the brink and start investing in a brighter future.

I’m fortunate enough, during this pandemic, to still have a job that keeps me and my toddler just above the absurdly low poverty line. For me — and for millions of parents across West Virginia and the rest of the country — whether we stay above that line comes down to Manchin.

As a parent, an educator, and a member of the West Virginia Poor People’s Campaign, I want to know, in this epic showdown between the huge corporate donors and the rest of us: Which side are you on, Joe?

Kristen Olsen is a mother, educator, and a West Virginian member of the Poor People’s Campaign: A National Call for Moral Revival. This op-ed was distributed by OtherWords.org.