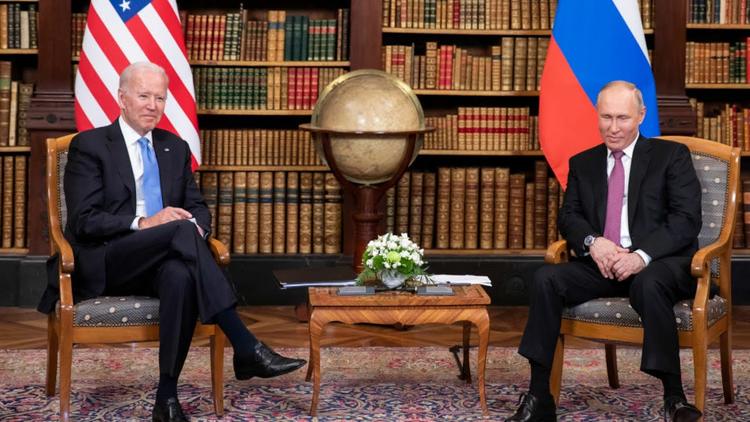 Ann Arbor (Informed Comment) – I don’t approve of all the loud saber-rattling in Washington on Russia. For reasons I’ll explain below, I nevertheless don’t think Russia has a right to nibble at Ukrainian territory. Although I think Washington over-uses sanctions and in a broad-stroke way that inflicts a lot of harm on innocents, carefully targeted sanctions are probably the only tool available to the Biden administration in the way of deterrence.

It would not be right, however, to let go without comment an important reason for the confidence of Vladimir Putin, the president of the Russian Federation. He has never believed that the Ukraine is an independent and sovereign country. That belief or lack thereof would have little real-world effect if Putin did not also believe that he can whittle away at Ukraine’s territory and sovereignty with little real cost.

Why does Mr. Putin hold that he is so teflon? Three words: Donald John Trump.

Given Trump’s long and repeated role as Putin’s lapdog, it is truly hilarious to see Republicans slamming Joe Biden for an allegedly “weak” posture toward Russia.

The evidence that the Russian military used cyber espionage to interfere in the 2016 presidential election is irrefutable. Whether that interference swung the election or not can be debated, but the fact of the interference cannot.

At the Trump-Putin Helsinki summit in the summer of 2018, reporters asked Trump about that interference. He replied,

“My people came to me, Dan Coates, came to me and some others they said they think it’s Russia. I have President Putin. He just said it’s not Russia.

I will say this: I don’t see any reason why it would be.”

Dan Coates was the Director of National Intelligence. Trump openly and publicly said that he trusted Putin’s version more than that of his own highest intelligence officials (despite his later attempts to backtrack).

At the same Helsinki news conference, Putin admitted that he had wanted Trump to win in 2016.

Trump’s gaffe was not a one-off. Marshall Cohen at CNN compiled a list of “37 times Trump was soft on Putin.”

Cohen notes that Trump reversed US policy and said he was good with Putin’s 2014 military annexation of the Crimea from Ukraine: “”The people of Crimea, from what I’ve heard, would rather be with Russia than where they were.”

He ordered the CIA to share more counter-terrorism intel with Russia, even though Moscow did not reciprocate.

He met with Putin privately late in 2018 at a G7 summit, without either a translator or note taker, in defiance of all US government protocol, so we have no idea what was said.

Putin knows that he can do no wrong in Trump’s eyes and that Trump is still the head of the Republican Party, which likely will get Congress back later this year.

The Russian president not only believes that the US is deeply divided, he believes that it is a power in decline. Speaking in 2018 about Washington’s use of financial sanctions, he observed,

“”It’s a typical mistake of an empire. An empire always thinks that it can allow itself to make some little mistakes, take some extra costs, because its power is such that they don’t mean anything. But the quantity of those costs, those mistakes inevitably grows. And the moment comes when it can’t handle them, neither in the security sphere or the economic sphere.”

He went on to criticize the US involvement in the Middle East (I think he meant the Iraq War), saying,

“Thank God, this situation of a unipolar world, of a monopoly, is coming to an end. It’s practically already over.”

Trump, of course, lifted some sanctions on Russian bad actors.

It was the irresponsibility of the Republican electorate that put a total flake like Trump at the head of US foreign policy, which fatally undermined US credibility.

How did we get here? In mid-August, 1991, the Soviet officer corps attempted to make a coup, but were thwarted. As soon as that coup plot collapsed, the leadership of the Ukraine Soviet Socialist Republic, with Leonid Kravchuk at the forefront, declared independence. Kravchuk became president and that December a national referendum on independence was held. The vote saw an enormous turnout and an avalanche of votes for independence. KGB Colonel Putin may have viewed these events with disgust, but the new reality came into being anyway.

I would argue that once Ukraine was admitted to the United Nations, its territorial sovereignty was de jure recognized by all the other members of the UN, including Russia, since they are signatories to the UN charter. If Russia has territorial disputes with Ukraine, let it negotiate them.

But let us be clear: No American president is going to go to war with Russia over the Ukraine. There is no compelling US national interest in a military involvement in that part of the world, and Russia is a nuclear-armed state. The steps President Biden has spoken about, including sending 8,000 US troops to countries in the vicinity of Ukraine that are allied with Washington, are (rather weak) symbolism. The threat of economic sanctions is in any case far more powerful. But Biden wouldn’t be playing such a weak hand if the US had had a unified position for the past five years and if Trump hadn’t appeared to be working for the other side.