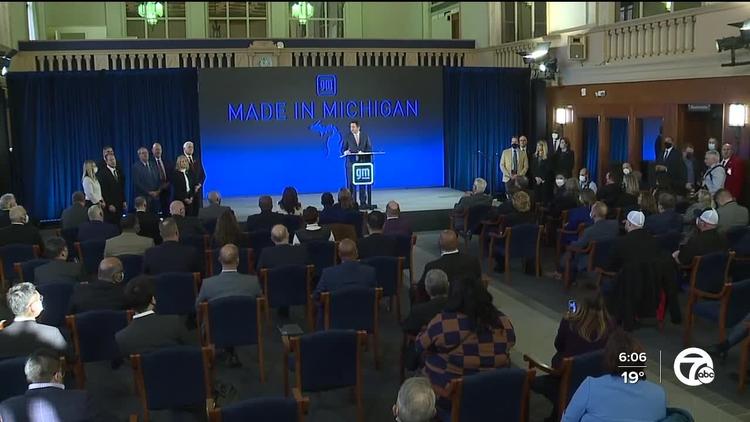 Ann Arbor (Informed Comment) – Kalea Hall at the Detroit News reports that General Motors will invest $7 billion in the development of electric vehicles and batteries, in a bid to overtake Tesla.

That $7 billion is the biggest single investment in GM’s history. It was incentivized by $824.1 million from the Michigan Strategic Fund authorized by Gov. Gretchen Whitmer, a Democrat. Michigan regrets not having sweetened deals enough to keep Ford’s ambitious $11 billion electric vehicle investments in the state. Ford is going to Tennessee and Kentucky.

The GM investments are, however, a major victory in themselves. In just the next 3 years, GM will put $30 billion into developing 30 lines of electric vehicles. The estimates are that around that time, 2025, the sticker price of EVs will fall below comparable gasoline cars. EVs are already cheaper if you count the savings in fuel over their lifetime and the damage to the environment and the climate that they avoid.

The Detroit Big Three automakers were always reliable supporters of Big Oil and helped lobby state and federal governments for them. The greens have succeeded in breaking that alliance, which immensely weakens Big Oil and sets the stage for it to dwindle rapidly. Meanwhile, the big auto makers are more and more allies of green energy instead, since their vehicles will need lots of clean electricity.

GM hopes to be selling 1 million electric vehicles a year in 2025. Its Silverado electric pickup truck alone is expected to be extremely popular and to sell 600,000 a year by then.

“We’ll have over a million units of battery electric vehicle capacity in the United States by 2025, and that 600,000 is a major part of that. As we see the transition happening, we know the adoption rate has really increased over the last year or two. We’ve done that research and we see the acceptance of the newly introduced Silverado as very, very positive, and high as well.”

Rose White at Mlive reports that the Michigan statehouse has a bipartisan consensus in favor of using state incentives to attract green transportation investments, with State Rep. Ben Frederick, R-Owosso, a co-sponsor of the bill that funded the incentive program. This across the aisle cooperation on this issue is exciting for its climate implications, since Republicans had often opposed the electrification of transportation. Now that EVs are becoming big business, they are beginning to attract the interest of the part of big business.

White explains that GM will put $4 billion into converting an Orion Township factory to turn out EVs instead of gasoline cars, and will build a $2.6 billion electric battery facility in Delta Township. It will also put money into upgrading two auto plants in the Lansing area.

The new GM projects will provide 4,000 new jobs and retain 1,000, generating $35 billion in ancillary business for the state.

Stanford Professor Tony Seba foresees a double whammy for the petroleum industry, which he thinks will be dead by 2030, as Rick Kowalchuk at Energi Media reports. One is the rise of electric vehicles, which can use free sunlight and wind as their energy source, not dirty oil. The other is the likelihood that self-driving vehicles will replace ownership of passenger cars, offering “transportation as a service.” If tens of millions of drivers forego car ownership, and when they do order a car to get somewhere use an electric autonomous vehicle, petroleum is doomed.

It can’t happen too soon to save the earth.