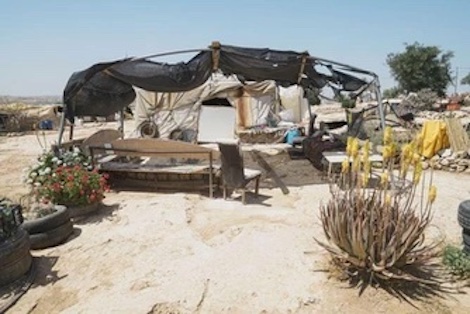 ( Traveling Twins ) – On Friday, December 24, I joined a Breaking the Silence tour of the South Hebron Hills- an area in the southern West Bank designated as Area C – meaning under full Israeli control and supervision. We visited sites surrounding Yatta, a central Palestinian city, including the Lucifer Farm, and the Palestinian Susiya.

The Lucifer Farm is an unauthorized outpost built by Yaakov Talia, a South African who converted to Judaism and immigrated to Israel when apartheid ended. But his “aliyah” is marred by what he brought with him: An apartheid ideology that he implements toward Palestinians. One cannot escape the intense irony: While apartheid ended in South Africa, he made sure to keep it alive and became a vocal supporter of ethnic segregation (as he stated in an interview on Israeli TV). The outpost has expanded over the years, mainly by using violence and intimidation tactics against Palestinian cave dwellers in the area, driving them away and taking over their pasturelands. 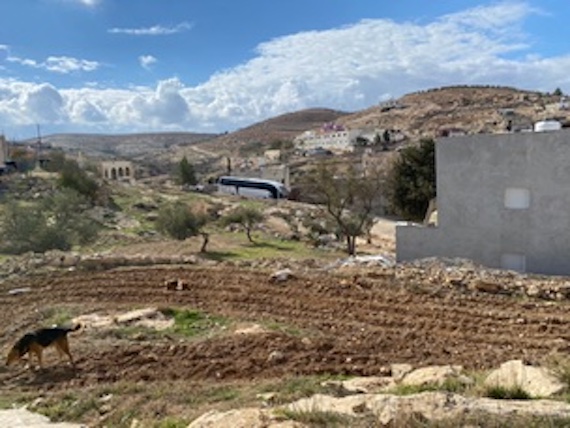 Settler violence continues unabated, and from what we saw and heard – the authorities turn a blind eye toward this systemic violence. There is also a major difference in how violence is treated depending on the perpetrator: Israeli citizens who commit a violent act are (rarely) prosecuted under civil law whereas Palestinians who commit a violent act are prosecuted under military law. So if an Israeli settler were to throw a rock, for instance, they would theoretically be prosecuted under civil law but in reality – nothing would happen to them. However, a Palestinian throwing a rock would be seen as an act of terrorism and they would be severly punished. Knowing this, the settlers have an incentive to act violently, assured that their actions have no real consequences.

Next we visited the Palestinian Susiya. After being destroyed in 1985, this village was rebuilt near the Susiya archeological site, where the original Palestinian community of Susiya had been located in the late 1800’s. The residents were expelled, ostensibly, because construction is prohibited on archeological sites. Yet, today two settler families live on that exact site.

The new community of Susiya, built on agricultural land that belongs to the village’s Palestinian residents, has also been destroyed several times, and in recent years, the Civil Administration has issued demolition orders for the vast majority of the Palestinian homes in the area. Many of the demolition orders in these areas are issued based on historical land law systems from the Ottoman period which are completely irrational to use today. But it’s really a pretext, since the Civil Administration refuses to issue any zoning plan for the thousands of Palestinians who live in this area. It is truly disheartening to see this cruelty: You–some 30 Palestinian villages–are violating zoning laws so it’s “legal” for us to demolish you. But we will make sure to keep you as violators since we’re never going to issue a Master Plan for this area.

At each stop on the tour, repeated themes and patterns came up; settler violence as a systemic issue, eviction and demolition orders based on such pretexts, de-facto annexation of West Bank land by Israel, enforcement of policies with the sole purpose of dispossessing Palestinians and using their land for the benefit of Jews.

At the end of the tour, we talked to a Palestinian activist from Al-Tawanni whose home is threatened by a standing demolition order. She said the main thing we can do is spread the message to our communities at home, which is what I’m doing with this post.

Chants from the protest

Hearing about all the immoral tactics the Israeli government utilizes to push Jewish settlers into the West Bank at the expense of current Palestinian residents, I felt compelled to stand in solidarity with those who are facing this fate. So after the tour, we attended a protest in Sheik Jarrah in East Jerusalem–just a few kilometers from where I have been living for the past 4 months–against the eviction of an innocent family from their home.

At the protest, I couldn’t help but see parallels to the Black Lives Matter rallies that took over the US in June 2020. About ten minutes in, it started getting violent and Israeli-Jewish allies began pushing the police. On the one hand, I understood that rioting is the language of the oppressed. But it wasn’t the Palestinians egging on the police, rather, it was the Israelis. On second thought, this makes sense because were the Palestinians to push the police, they would be arrested on the spot. So too in the Black Lives Matter rallies in June- those fighting for their own liberation are those who get the fiercest backlash, making the role of allies crucial.

Participating in the tour and the protest, I gained perspective on the reality on the ground for Palestinians. I also saw the parallels in the fight for justice across continents, while still recognizing the drastic difference in the movements: In the US, many police reform bills were introduced and passed following the BLM protests, while Palestinians will continue to face harassment and dispossession as long as occupation lasts.

Via the Traveling Twins Blog.