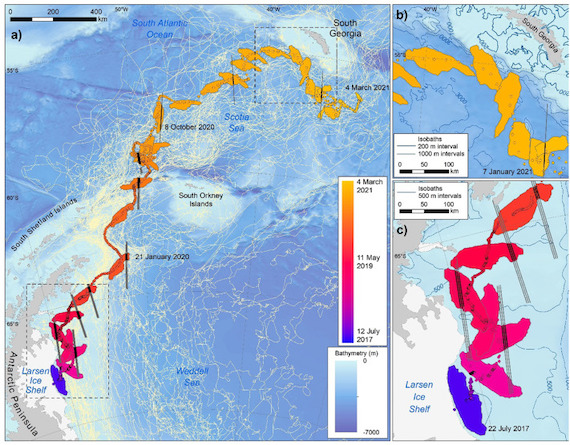 Ann Arbor (Informed Comment) – Anne Braakmann-Folgmann et al. in an article for Remote Sensing of the Environment observed by satellite the now-disintegrated Iceberg A68A over its 3.5-year life since it hived off the Larsen-C Ice Shelf in Antarctica in 2017, and found that it dumped 168 billion tons of fresh water into the ocean near the South Atlantic island of South Georgia (near the Falkland Islands off Argentina).

Professor Braakmann-Folgmann, at the University of Leeds, told its news service, “This is a huge amount of melt water, and the next thing we want to learn is whether it had a positive or negative impact on the ecosystem around South Georgia.”

This was not an ordinary iceberg — it was gargantuan, at 2,000 square miles, 1.5 times the size of Rhode Island, as George Dvorsky notes at Gizmodo.

This map accompanying the journal article shows the iceberg’s course before it melted entirely away last spring.

Via Remote Sensing of the Environment Creative Commons license.

The Larsen C ice shelf holds back enormous glaciers and if it breaks up, rapid and catastrophic sea rise would follow. It has lost area during the past few decades of satellite observation, according to the BBC, but scientists are hoping that it is stable enough to survive man-made global heating if we stop putting so much carbon dioxide into the atmosphere by 2050. The fate of the ice shelf, though, is a mystery, and it is an alarming sign that the oceans are heating up much faster than anyone had expected. 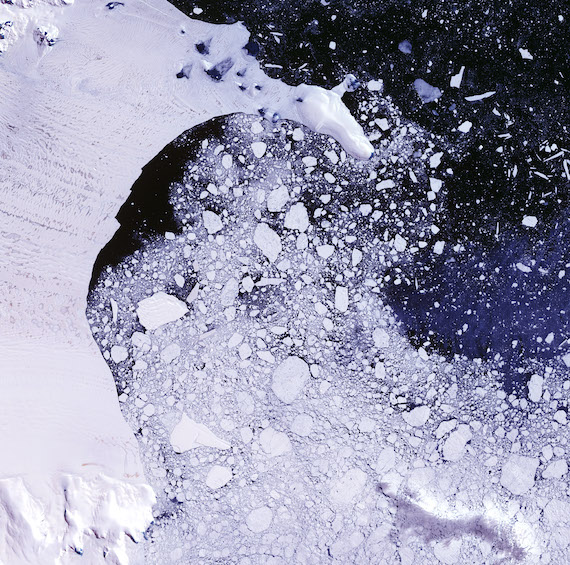 Larsen C itself benefits from lying in the cold Weddell Sea and so far has been shielded from the hotter waters flowing around other Antarctic formations, such as the unstable Thwaites glacier.

Scientists have recently found that the deepest layers of the southwest Atlantic between Argentina and Antarctica exhibit a long term heating trend at all sites measured. Thus, the Scotia Sea is much warmer than the Weddell Sea that abuts the Larsen ice shelf, and it is when Iceberg A68A entered the former that it started really melting fast. If we go on boiling the earth by driving gasoline cars and burning coal, however, the Weddell Sea will heat up, too, and that will spell curtains for Larsen C.

It is murky whether Iceberg A68A is just part of a normal birthing of icebergs by an ice shelf or if it is a dangerous sign that Larsen is becoming more unstable. In 2017, when it calved, scientists were really worried that it might destabilize the Larsen C ice shelf. It is certainly the case that A68A melted much more rapidly in the past few years than a similar iceberg would have done a century ago, because of the heating waters of the South Atlantic.

There is no doubt that if we do keep putting carbon dioxide into the atmosphere at our current rate, we will melt the Larsen ice shelf, and will thereby unleash a string of mega-glaciers.

What that would look like is shown by Iceberg A68A, which floated north to the South Sandwich islands, disintegrating and shedding water along the way, but making the big dump off the island of South Georgia, which doesn’t have a permanent population. Calving icebergs affects the stability of their ice shelf, Braakmann-Folgmann and her colleagues note. They add, “The response of icebergs to the warmer climates they drift through can also inform predictions on how the Antarctic ice shelves will react to climate change.”