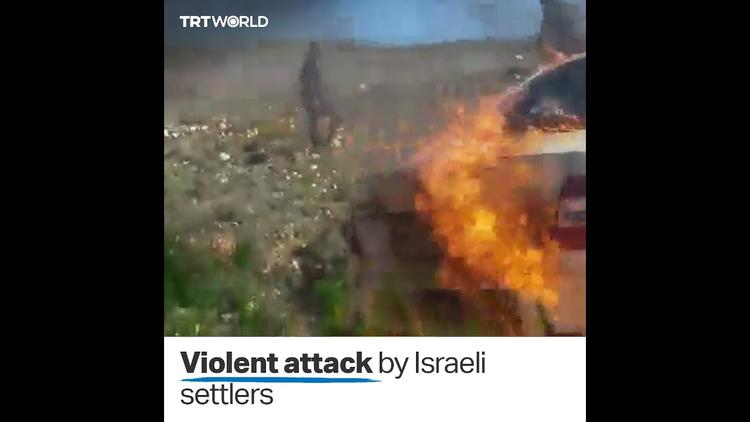 ( Middle East Monitor) – Illegal settlers from the Givat Ronen settlement carried out a terrorist attack against Palestinian citizens and activists from Israel’s Rabbis for Human Rights. This resulted in ten of the Israeli activists being injured, one of their cars being set on fire and another one being damaged. While deplorable, the attack highlighted the importance of joint Palestinian-Israeli action against the occupation and the settlement project that threatens the legitimate right of the Palestinian people to self-determination and their own independent state on the territories occupied since 1967, as well as a just peace in the region that guarantees security and stability for everyone.

This settler aggression caused uproar in Israel, not only because of the extremism and terrorism of the settlers which threatens security in the occupied Palestinian territories — with the possibility of a robust Palestinian response — but also because this time the extremist settlers attacked Israeli Jews whose only “crime” was to help Palestinians plant trees in the town of Burin, south of Nablus. Israeli condemnation of the settler violence was widespread, from politicians and others.

“This shocking violence… should be a warning light to all of us,” tweeted Foreign Minister Yair Lapid. Deputy Defence Minister Alon Schuster said that the perpetrators are “undermining state security, harming Israel’s moral image and ruining the good name of the Jewish settlement in Judea and Samaria [the occupied West Bank].” According to Defence Minister Benny Gantz, “The recent events of national crime in Judea and Samaria [sic] are serious, and I intend to deal with them seriously.” Even the West Bank Settlements’ Council condemned the attack, and stronger condemnations were issued by left-wing personalities and organisations. Writers, journalists and activists described what happened as organised terrorism that must be addressed and punished without delay.

Settler terrorism does indeed pose a serious — arguably the most serious — threat to Israel’s security, and there are demands that the Shin Bet internal security agency should play its role in eliminating such acts. The Institute for National Security Studies (INSS) has just issued its latest report on the strategic challenges facing Israel’s security and future stability in 2022; settler terrorism is ranked second only to the Iranian nuclear threat. The INSS refers to the frustration of the younger Palestinian generations and their serious consideration of a one-state solution that threatens Israel’s future as a “Jewish and democratic” state. The conflict between the Palestinians and the Israelis even affects the third challenge related to the occupation state’s domestic unity, what happens between its Jewish and Palestinian citizens.

Many Israelis feel the danger to Israel of the settlement project, and this includes the threat posed by settler terrorism. This is reason enough for the Palestinians to think seriously about a partnership with Israelis to confront the settlers’ movement and their violence. The joint action in Burin is a model that should be developed, as the participation of Israeli activists in peaceful popular protests embarrasses the Israeli authorities and exposes the divisions in Israeli society. In time, this can lead to the desired political changes. The experience of the first intifada is perhaps the best evidence of what this struggle can bring about in Israeli society.

Thankfully, when the Palestinian activists addressed the attack on their Israeli counterparts, they did not talk about normalisation, under which any joint Palestinian-Israeli activity is generally and inappropriately categorised. What is happening arguably constitutes an invitation to all Palestinians to reconsider the concept of “normalisation”, and to distinguish between the common struggle for the rights of the Palestinian people, with peace between the two parties on the basis of international legitimacy and common interests, and “official” normalisation with the occupying power, as has happened with some Arab countries and Israel without linking normalisation to Israel’s withdrawal from the Palestinian and Arab territories occupied since 1967.

The struggle on the Israeli home front is no less important than the diplomatic battle in international forums such as the UN Security Council and General Assembly, the UN Human Rights Council and other human rights organisations, as well as the International Criminal Court. Official Israel rejects and fights joint Palestinian-Israeli activism. There are state-backed Israeli organisations such as NGO Monitor that oppose Israeli organisations and individuals who condemn the occupation and its crimes against the Palestinian people, expose its violations and cooperate with the Palestinians to end the occupation and agree a peace deal.

Settler terrorism doesn’t discriminate between Israeli Jews and Palestinians when it comes to attacking those who fight for our rights, and neither should we. We must be on the side of those who join us in our struggle, even if they do so in order to serve their own interests. We cannot afford to be on the side of the occupation and extremism, although we may use the most revolutionary and radical slogans.