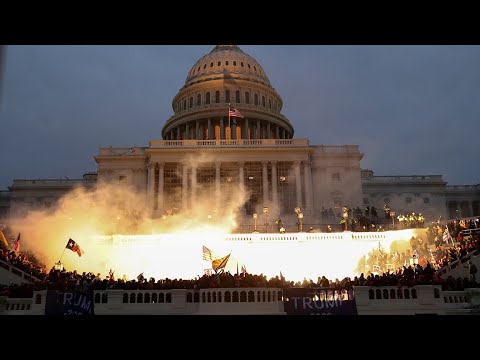 Ann Arbor (Informed Comment) – You sometimes hear from right-wing pundits that the widespread Republican rejection of the legitimacy of President Biden is just mirroring the Democrats’ dismissal of Trump’s presidency.

This piece of whataboutism is not even grounded in the facts. 76 percent of Clinton voters on November 9, 2016 accepted that Trump was the legitimate president of the United States. About 22 percent of them felt that FBI Director James Comey put his thumb on the scale by pulling that crap about Hillary’s emails as an October surprise or felt that the election was unfair for some other reason.

Today, according to a recent NPR/ Ipsos poll, 52 percent of Trump voters believe that the outcome of the 2020 presidential election was fraudulent. There is no comparison to the stance of Democrats after Trump won.

One reason for the popularity of the Big Lie with Trump voters is that Trump promotes the Big Lie that there were election irregularities in November, 2020.. Another reason is that far right wing media like Fox Cable News promotes the Big Lie that there were irregularities. There were not. No responsible person believes that. None of the Fox anchors believes that privately. We know this from Sean Hannity’s text messages leaked by the January 6 Commission. Nevertheless, the NPR/ Ipsos poll found that more Fox viewers (54 percent) charge electoral fraud than do Trump voters (52 percent)!

The perception of reality is likewise dangerously skewed regarding the January 6 Capitol Insurrection. Only about a third of Americans believe that it was a coup attempt! Even though it is obvious that that was exactly what it was.
Another 28 percent believe that it was a riot that got out of hand. Yeah, it got out of hand accidentally when Trump asked the mob to invade the Capitol and thousands did so, taking a dump in its hallways and chanting that they wanted to hang the vice president and when they invaded and trashed congressional offices. Yes, things just got a little out of hand.

Article continues after bonus video
Reuters: “The photo that came to define the Jan. 6 attack on the U.S. Capitol”

But get this, 30 percent of Republicans believe that the Capitol Insurrection was a fraud, gotten up by antifa and government agents. That’s right, the tin foil hat brigade believes that the QAnon shaman was an FBI agent or maybe a leftist anti-fascist. Even though Jacob Chanley was tried and convicted and sentenced to 41 months in prison and openly said he only did what Trump asked him to do. A third of Republicans are the sort of people who believe that Neil Armstrong and Buzz Aldrin did not actually land on the moon in 1969. Only, their beliefs are substantially more dangerous than science denial. They are giving cover to far right-wing militias like the Oath Keepers and the Boogaloo Bois by denying them responsibility for their acts and shifting the blame elsewhere.

Among Republicans, only 40 percent agree that the Capitol riots were very violent. You would ask of the other 60 percent, haven’t they seen the video footage? The answer is likely “no,” because OAN and Fox Fable News won’t show it to them. Some 30 percent of Republicans believe the events were entirely peaceful.

Some 72 percent of Americans believe that the January 6 invasion of the Capitol threatened democracy, even though only half of them apparently thought it was a deliberate coup, according to an ABC/ Ipsos poll.

But 25 percent, fully a quarter, said in the same poll that the insurrectionists were protecting democracy. Yeah, sort of the way Uncle Joe Stalin protected democracy.

About 74 percent of Americans believe Trump was responsible or somewhat responsible for the riot. Again, exactly a quarter said he had no responsibility for those events.

ABC/ Ipsos did not disaggregate by party, but I think we know who that 25 percent are. A Washington Post poll found that 72 percent of Republicans and 83 percent of Trump voters believe that he either had no responsibility for January 6 or just “some.” He literally asked them to go to the Capitol, warning them that otherwise they wouldn’t have a country! He told them Pence hadn’t stepped up to do the right thing. What did he think was going to happen?

The polling shows that a substantial number of Republicans have turned against democracy and have fallen victim to Great Leader Syndrome as surely as North Koreans. Nothing could be more deadly to our Republic than to have one of the two major parties descend into reality-denying insanity and a “my leader right or wrong” mentality.