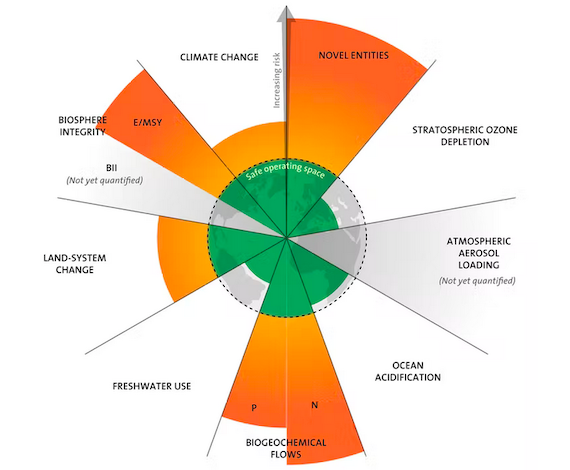 The production and release of plastics, pesticides, industrial compounds, antibiotics and other pollutants is now happening so fast and on such a large scale that it has exceeded the planetary boundary for chemical pollution, the safe limit for humanity, a new study claims.

We asked Patricia Villarrubia-Gómez, a PhD candidate at Stockholm University and one of the authors of the study, to explain what this means.

What are planetary boundaries?

In 2009, an international team of researchers identified nine planetary boundaries that maintain the remarkably stable state Earth has remained within for 10,000 years – since the dawn of civilisation.

These boundaries include greenhouse gas concentrations in the atmosphere, the ozone layer, an intact biosphere and freshwater. The researchers quantified the boundaries that influence Earth’s stability and concluded in 2015 that human activity has breached four of them. Greenhouse gas emissions are pushing the global climate into a new, hotter state, species extinctions threaten the biosphere’s integrity, the conversion of forests to farmland has degraded the quality of land and industrial and agricultural processes have radically altered natural cycles of phosphorus and nitrogen.

The researchers lacked the data to quantify the boundary for chemical pollution, otherwise known as novel entities (essentially, any substances made by humans plus natural elements like heavy metals which human activity mobilises or transports at high volumes), until now. Our research suggests we have crossed this boundary and beyond the known safe operating space for humanity.

How did you discover this?

This project involved 14 authors in five countries and was led by Linn Persson, an expert in chemical pollution at the Stockholm Environment Institute. We wanted to be able to understand the consequences of taking, using and releasing novel entities on a larger scale in the face of huge gaps in our knowledge. Essentially, we wanted to go beyond the individual’s ability to experience and comprehend these things.

We investigated a set of control variables that capture several of the complexities and characteristics of the planetary boundary for chemical pollution. One of these is the trend in the production of novel entities – the volume of chemicals and plastics produced, or the share of chemicals available on the market that have data on their safety or are assessed by regulators.

Another thing we assessed was the continued trend of global emissions of these chemical substances, including plastics, into the environment. We also considered the unwanted effects of these entities on ecosystem processes by drawing on evidence of the toxicity of chemical pollution or the role of plastics in disturbing the biosphere.

When did humanity breach this limit?

It is difficult to say specifically when humanity breached the planetary boundary for chemical pollution. Unlike other boundaries, this one deals with thousands of different entities.

We know there has been a 50-fold increase in the production of chemicals since 1950. This is projected to triple again by 2050. Plastic production alone increased 79% between 2000 and 2015.

There are 350,000 synthetic chemicals in production globally, and only a very small fraction of these is assessed for toxicity. We know little about their cumulative effects or how they behave in a mixture. This is important, as we are all exposed to (often) small concentrations of thousands of substances over our entire lives. We are only beginning to understand the large-scale, long-term effects of this exposure.

We judged that the boundary had been transgressed because the rate at which these pollutants are appearing in the environment far exceeds the capacity of governments to assess the risk, let alone control potential problems.

What is very important to us is that this study highlights the global scale and severity of chemical pollution. Not only because of the effects of producing and releasing such huge volumes of these substances into the environment on a daily basis, but also because it puts into perspective the consequences of human activity on a geological scale. These changes, led by humans, will have persistent and cumulative effects long after we have gone and industries have stopped pumping them out.

What are some of the possible consequences of exceeding this planetary boundary?

We have observed the problems and risks associated with chemicals and plastics during their entire life cycle. Currently, this is largely linear: from extraction, to production, to use, to waste and, finally, to release into the environment.

Damage can occur at all of these stages. For example, fossil fuels are extracted by processes that can lay waste to entire habitats. These raw materials then give rise to plastics and pesticides which take lots of energy and generate lots of climate-warming gases during manufacture. They are used to wrap food or are applied to farm fields, and then they end up in the soil or in rivers and, eventually, the ocean.

Their environmental impacts might be easiest to visualise according to their effect on other planetary boundaries. Plastics are tightly connected to the climate – approximately 98% of all plastics are made from fossil fuels and will release CO₂ when burned as garbage. Chemicals and plastics both affect biodiversity by adding additional stress to already beleaguered ecosystems. Some chemicals interfere with animal hormone systems, disrupting growth, metabolism and reproduction in wildlife.

Are some parts of the world exceeding this limit more than others?

This problem is a planetary one. As I understand it, the production and release of chemical pollution is intrinsic to the global economic system. In this way, the problem is like any other major environmental issue, including climate change.

People are exposed to these chemicals everywhere, not only in the countries where they are produced. We all use these products and chemicals keep being released while we use them. We consume them and then dispose of them, though they don’t simply go away.

There is a constant flow of them, and so, the situation is becoming more and more alarming. Even as we learn more, we are also making visible the vast unknowns that remain.

Where should governments prioritise action in order to bring humanity back within the safe limit as soon as possible?

I would like to cite my colleagues here. Professor Carney Almroth of Gothenburg University in Sweden says that the world must “work towards implementing a fixed cap on chemical production and release”.

“Shifting to a circular economy is really important. That means changing materials and products so they can be reused not wasted, designing chemicals and products for recycling, and much better screening of chemicals for their safety and sustainability along their whole impact pathway in the Earth system.”

We do not wish to paralyse readers with despair. Rather, we want to inspire action. We believe we are still on time to revert this situation, but for that we need urgent and ambitious action to take place at an international level.