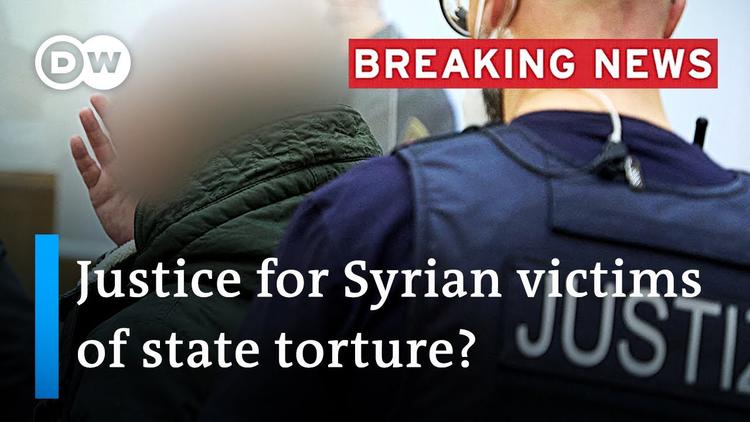 ( Globalvoices.org) – Survivors of torture in Syrian prisons celebrated a verdict made at 10 a.m. on Thursday, January 13 by Koblenz Court in Germany, convicting former officer in the Syrian regime Anwar Raslan of crimes against humanity. Many also demanded the end of torture for their loved ones still held in Syrian prisons.

After nearly two years of trial, former colonel Raslan was sentenced to life imprisonment after being found guilty of murdering over 30 people, and sexually assaulting and torturing over 4,000 opposition activists in the notorious Branch 251 of the state’s intelligence service, known as Al-Khatib branch, between 2011 and 2012.

Fadwa Mahmoud, a Syrian woman based in Germany, wrote on Twitter:

Today I came to Koblenz to attend the sentencing of one criminal from among the criminals of Syria, but does this bring justice to me as a mother and as a wife who does not know the fate of her family for nine years? [It’s] a good step, but we are as far away from justice as I am from my loved ones. We want justice for the detainees.”

Anwar Raslan is a Syrian intelligence officer until 2012, and a political refugee in Germany since 2014, where he was active in the political opposition after his defection from the Syrian regime and participated in the Geneva negotiations in 2014.

However, this did not protect him from a warrant issued against him by the German public prosecutor, and did not prevent his arrest on February 13, 2019, along with another lower ranking intelligence officer, Iyad Gharib. Nearly a year ago, Gharib was sentenced to four-and-a-half years in prison for complicity in crimes against humanity.

#Samaa_Mahmoud holds the photo of her uncle Hayyan Mahmoud who was arrested in Al-Khatib branch when Raslan was head of investigations: “Justice is for him not to breathe air, and justice is for him [Anwar Raslan] not to come out for as long as there are prisoners” #Assad #Syria

The sentence, described by the Human Rights Watch as “historic,” is the first against a high-ranking official from the Bashar al-Assad regime for torture and human rights violations.

Omar Alshogre, an activist who survived three years of torture in a secret Syrian prison, said in a video he published on Twitter that the ruling renews hope among Syrians that the regime will fall:

Congratulations to the Syrian nation the life sentence handed to the war criminal Anwar Raslan.

According to media reports, the German court drew its verdict against Raslan from 100 testimonies of torture survivors in Branch 251who came face to face with the head of the investigations department at the branch, Anwar Raslan, and gave detailed accounts of physical and verbal abuse.

After a complete denial, Raslan amended his statements in his closing arguments and admitted the existence of torture and the killing ofdetainees inside the branch, but he denied responsibility.

Sentencing Anwar Raslan is a good thing, for the sake of the direct victims, and for criminalizing the regime’s intelligence services in general. It may contribute to making normalization with the regime more difficult.
But it is not a step towards justice for the Syrians.
There is no need to exaggerate, nor to underestimate, it.

The Koblenz Supreme Court: Life imprisonment for Anwar Raslan for crimes against humanity including torture, 27 murders, and sexual violence. Torture is among the most serious international crimes. Al-Assad’s institutions of torture must ended, not normalized and rehabilitated.”

The most important thing in the Koblenz court is the hope that some kind of justice can be achieved. Dozens of testimonies, and thousands of details that are put in court for the first time about what is happening inside Syrian prisons. Our hearts are with every witness who was forced to recall a series of pain, reveal it and confront their jailer. [We are] waiting for the next steps against the regime’s criminals who are at large!