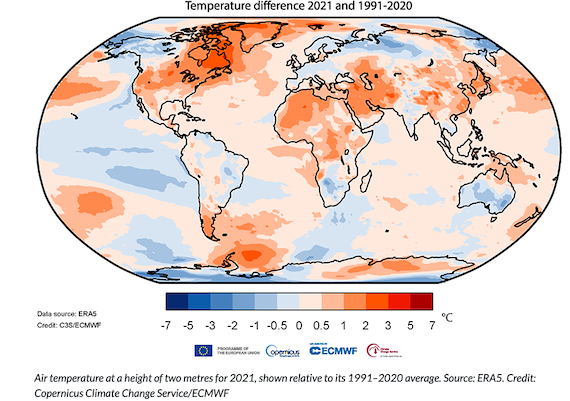 Ann Arbor (Informed Comment) – The European Union’s Copernicus Climate Change Service reports that the seven hottest years on record “by a clear margin” were the past seven years.

This finding underlines the way global heating is speeding up, as we put more and more heat-trapping carbon dioxide into the atmosphere. Global temperatures fluctuate with phenomena like the El Niño/ El Niña, caused by warming or cooling surface temperatures in the eastern equatorial Pacific Ocean. So to get the kind of consistent high temperatures of the past seven years demonstrates that a more powerful “forcing” is overriding El Niño/ El Niña. That is green house gas emissions.

We typically measure increases of temperature over the late nineteenth-century baseline, sort of 1880-1900. We are now about 2 degrees Fahrenheit (1.1- 1.2 degree Centigrade) above that marker. Climate scientists worry that if we go higher than 1.5C / 2.7F, the earth’s climate could go chaotic. Moreover, if we go on as we are, we will outrun our safety valve. All the extra CO2 we have spewed into the atmosphere so far will be absorbed by the oceans, so the earth will gradually cool back down.

But the oceans have a limit to what they can absorb, and we will go past that limit at our current rates by 2050. Any carbon dioxide we put up after that will be around for thousands, maybe 100,000 years. We are on the verge of radically changing the earth’s climate in a way that could last for as long as the human race has existed.

The long-lasting character of CO2 in the atmosphere is why I think it is the main threat. Methane is also a greenhouse gas, but it dissipates relatively quickly. 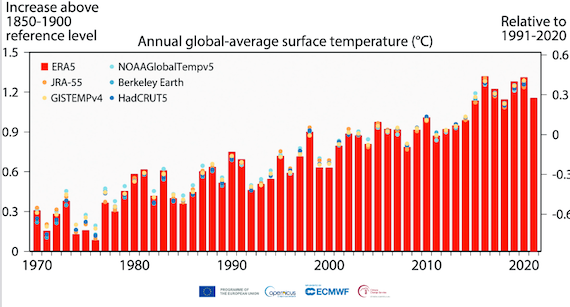 More bad news. Carbon dioxide emissions continued to rise in 2021, reaching an average of 414 parts per million. That is a truly scary statistic. Oliver Milman at The Guardian reports that greenhouse gas emissions were up 6.2% in 2021 over 2022, most of the increase coming from gasoline-driven cars and trucks.

Copernicus notes that we are already seeing Frankenstein’s Weather as a result of this massive concentration of heat trapping gases. There were severe floods in Germany and elsewhere in Europe last summer, wildfires in Greece and Turkey, and a heat wave in the southern Mediterranean beyond anything in the historical record. It reached just about 120 degrees F/ 48.8C in Sicily, the highest temperature ever recorded in Europe.

In North America we saw global heating burn up whole towns in Canada and create record temperatures in usually temperate Seattle and Portland. The Dixie wildfire in California was the second worst on record.

Climate change is not a matter of a dystopian future. We are living it. Now. And it is an increasing challenge. It is a challenge we can overcome, but the longer we burn fossil fuels the steeper the task will be.