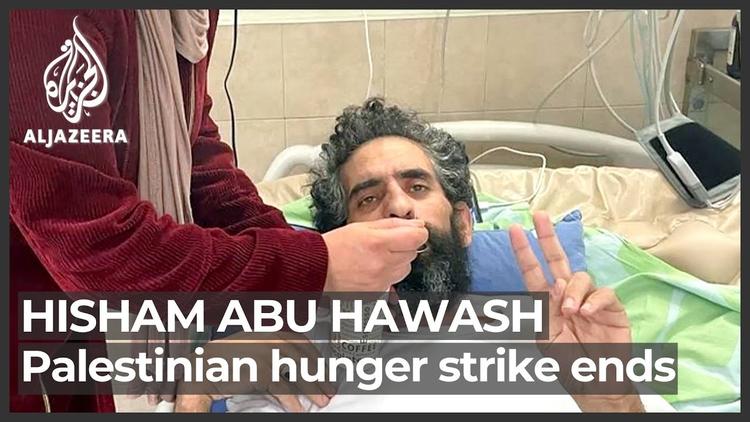 ( Middle East Monitor ) – The Palestinian people rightly saluted Hisham Abu Hawash as a brave man who was prepared to die in pursuit of his freedom. On 4 January, the occupation state of Israel agreed to his release following his almost five-month long hunger strike. Images of Hisham’s frail, almost skeletal body were widely shared on social media, together with a video of Hisham’s children visiting and hugging their dying father, raising anger amongst human rights defenders.

Those who have experienced fasting, particularly for religious reasons, will readily acknowledge how challenging experiencing hunger is. At the end of just a day of fasting, they are ready to tuck into a feast. Imagine going without food for almost five months as Hisham did. Imagine also what would drive someone to do this.

I doubt that any of his captors would be brave enough to do what he did for freedom.

Hisham was held in administrative detention, which Israel uses and abuses at will with no accountability. A practice it uses to hold Palestinians for extendable periods without charge, on suspicion that they pose a security threat. Once it has designated the evidence as ‘secret’, it can apply repeatedly for renewal of detention, which the Israeli courts almost always uphold.

Abu Hawash is not the first and he certainly will not be the last Palestinian whose rights Israel abuses in this way with impunity. The Palestinians have Britain to ‘thank’ for this law, which Israel

In October, five Palestinians where on hunger strike demanding their freedom, moving UN experts to point out that calls on Israel to comply with its obligation have come to no avail. “In international law, administrative detention is permitted only in exceptional circumstances, and only for short periods of time. Israel’s practices exceed all of the international legal boundaries.”

All but one of the detainees succeeded in forcing Israel to release them within days of each other, except Abu Hawash who doctors warned last week was near death.

The international community which usually rushes to claim Israel has a right to defend itself against Palestinian resistance were tongue tied and said nothing in opposition to the practice which UN experts called an “unlawful practice”.

While Abu Hawash will be released on 26 February, there are currently over 500 Palestinians, including six children being held under administrative detention.

The remaining detainees recently announced that they will boycott the Israeli courts system in protest at their detention.

It is left to individual detainees to fight for their freedom from administrative detention. Israel can and in 2022 will detain more Palestinians without charge or conviction. While some foreign missions in Palestine raised their ‘concern’ in Hisham’s case, none committed to taking a stand that would place enough pressure on Israel that would force it to end this practice.

Neither embassy in Tel Aviv tweeted or made any comments about the practice. Why this division of responsibility? The missions express concern in Ramallah but blindly support Israel in Tel Aviv? As for the US, well the US Embassy Twitter account was silent on the matter and in the absence of a US Consulate in East Jerusalem, it is difficult to judge whether the consulate which Biden promised but has thus far failed to reopen, would have said in the matter.

The reaction in Palestine to Hisham’s release was joyous but Palestinians questioned whether Palestinian President Mahmoud Abbas had raised the issue of Abu Hawash when he met Israeli Defence Minister Gantz at his home near Tel Aviv. However, a video circulating on social media, appeared to show Abbas being thanked by a member of Hisham’s family thanking the president for his efforts in releasing him. What is clear though is that Hisham gained his freedom through his own sacrifice and the support of people around the world rather than Abbas’ intervention.

In Israel, the reaction of a society that keeps moving to the right as it continually elects extremist leaders was of anger at the agreement to release Abu Hawash. However, their anger should have been directed at their government and the legal system which allows detention without charge. They would not accept this practice for their own family or friends.

The anger was exemplified by the extremist, far right Kahanist MK Itamar Ben Gvir who on hearing the news of the ‘deal’ attempted to break into the Abu Hawash’s room at the hospital but was prevented by Hisham’s family and supporters. Another far right Israeli attacked a Palestinian cameraman outside the hospital simply for reporting on the gathering.

Britain’s legacy since the Balfour Declaration and the Palestinian Nakba that coincided with the end of the British Mandate, continues to haunt Palestinians, with the practice of administrative detention which Israel adopted to suit its oppressive policies towards the Palestinians.

Successive administrative detainees have used hunger strikes as a last weapon to peacefully seek their freedom. In addition to labelling Palestinians ‘terrorists’ and their use of peaceful means of resistance as different variations of this, including ‘economic terror’, ‘political terror’, an Israeli leader is likely to couch a new phrase to label hunger strikes as a form of terror. Perhaps this could be ‘starvation terror’ or ‘hunger terror’. The alternative will be to label it as some form of ‘new anti-Semitism’, perhaps that the administrative detainees would not do this if they were detained by another country, ‘singling Israel out’ because it is what they claim to be ‘the world’s only Jewish state’. Mad as it sounds it would not surprise me in the least if Israeli leaders attempted to smear these brave detainees for fighting peacefully for their freedom.

The easier route for the oppressive state would be to end this practice. Detainees should either be charged or released if the state cannot bring charges.

While its at it, it could recognise the rights of Palestinians to freedom, justice and equality in their homeland, end its settler colonialist Apartheid policies and make peace with the Palestinians whose land it continues to exist on through the denial of their rights, including the right for the refugees to return, oppression and most importantly, through the barrel of the gun.