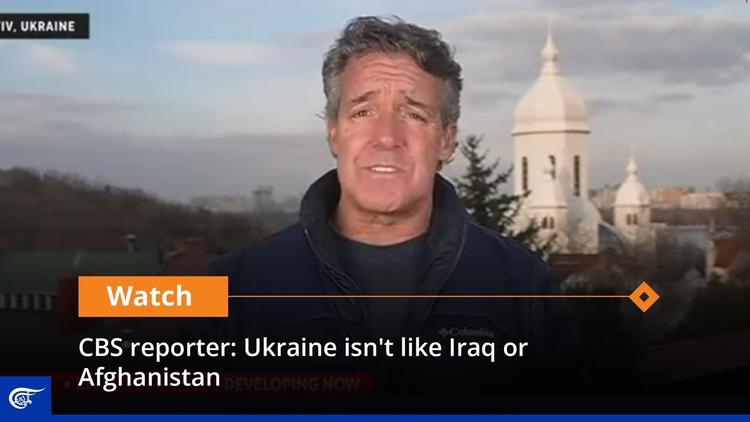 Ann Arbor (Informed Comment) – Some European and American commentators on Russia’s war against Ukraine have covered themselves in shame by implying that because Ukrainians are “European” or “civilized” it is harder to see them hit by artillery and made refugees than it had been with regard to Iraqis or Syrians. While in 2015 Syrians and Afghans who came to Europe were called “migrants” and were seen as a dire problem, Ukrainians fleeing their country for European states have been welcomed and called refugees. But the Syrians were also fleeing a war, and from fall of 2016 were even fleeing the same Russian bombers that the Ukrainians are.

CBS’s Charlie D’Agata said on-air on Saturday from Kyiv, “Tens of thousands of people have tried to flee the city; there will be many more. People are hiding out in bomb shelters. But this isn’t a place, with all due respect — aargh — like Iraq or Afghanistan, that has seen conflict raging for decades. This is a relatively civilized, relatively European — I have to choose those words carefully, too — city, where you wouldn’t expect that or hope that it’s going to happen.”

CBS: Russia Closes in on Kiev

Mr. D’Agata apologized after an uproar arose in the aftermath of his interview.

I’m sure he feels badly, and this column isn’t personal. I admire journalists in the field for their bravery and dedication. The question is how a seasoned correspondent fell into that discourse. Let us take it apart and look at the terms he used. He at some level knew that he was making unacceptable remarks, because he kept his eyes downcast during these remarks and he kept hemming and hawing. He also signaled that he had to be careful how he was phrasing the statement about “Europeans.”

I think he was having difficulty seeing that underlying his discourse was that Ukrainians are white, and hadn’t expected to be treated as though they were brown or black. “Civilized” as an adjective stands in for whiteness, as does “European.” The adverb “relatively” suggests that perhaps their whiteness is not complete. They are not British or French (read Anglo-Saxon or Gallic), but still. Somewhat civilized. Somewhat European. Not like Iraqis and Afghans.

The corollary is that brown and Black people are not civilized and are perpetually enmeshed in violence. There even seems to be an implication that it isn’t so bad if the U.S. or other “civilized” (white) countries pile on over there, because those people are used to it or at least not surprised by war and violence.

Mr. D’Agata’s apology had some of the same flaws as his initial statement. Actually, Iraqis were not at war for most of the twentieth century.

Further, at the time of the 2003 American invasion, Iraq had been at peace for 12 years.

Iraq was a sleepy Ottoman province until WW I, when a war was fought over their heads by the British Government of India, which sent Indian and British troops from Bombay, and the Ottomans, allied with Germans who provided a few field officers in Iraq. Iraq did not fight in WW II, but when nationalist officers made a coup and declared neutrality, the British invaded. It was all over quickly. Iraq provided some troops to the Arab side in 1948 seven years later, but again this was a brief campaign that had no success. From 1948 until 1980, I do not believe the Iraqi army fought outside the country. They did not join the 1956 or 1967 Arab-Israeli Wars. They fought an 8-year war, 1980-1988, with Iran, and then the Gulf War, Jan. 1991-March 1991, with an international coalition led by the United States. So of the 100 years of the twentieth century, Iraq was at war as a country for perhaps 15 years total.

The United States easily outdid that record, however “civilized” and “European” it might have been, particularly if we consider its wars and occupations in Central America, the Caribbean, the Philippines, Korea and Vietnam, as well as the two World Wars. Remember, too, that Britain and France were not just countries but empires that were constantly at war abroad and sometimes on the Continent as well.

As for the maelstrom that came in the wake of George W. Bush’s civilizing mission (sarcasm alert), it left 4 million Iraqis homeless, killed hundreds of thousands, wounded millions, and left hundreds of thousands of widows and millions of children bereft a father. The U.S. was not directly responsible for all of that carnage, but was its proximate cause. And then we blame Iraqis for being fractious!

As for Ukraine, it suffered both world wars, the Great Famine of the early 1930s, the Cold War, the collapse of the Soviet Union, the 2014 Russian invasion and annexation of Crimea, and, ever since the Donbass War. Why Mr. D’Agata thought war was foreign to Ukrainians bewilders me.

So the premise, that “European” equals “peaceful” or “civilized” is an optical illusion. We don’t consider the French war to crush the freedom movement in Algeria 1954-1962 to have been uncivilized, even though it was marked by brutality and torture.

Why do North Americans and Europeans have this blind spot? Because whiteness covers a multitude of sins.

As for being civilized, the Iraqis in many ways invented the key elements of civilization — writing, urbanization, riparian water management, bureaucracy, the rule of law, astronomy, maybe even the wheel. I actually thought that the long US occupation of Iraq would provoke some American interest in its ancient and modern history and culture, and was shocked when it didn’t. I guess people were too busy with reality t.v.

Nor is it just a matter of ancient history. In the late twentieth century Iraq was one of the more industrialized and literate Arab societies. Today, the IMF estimates Iraq’s annual per capita income by purchasing power parity at $10,000. Ukraine’s is on the order of $13,000 (or it was until last week).

Iraq and Ukraine are just not that different. Except, you know.