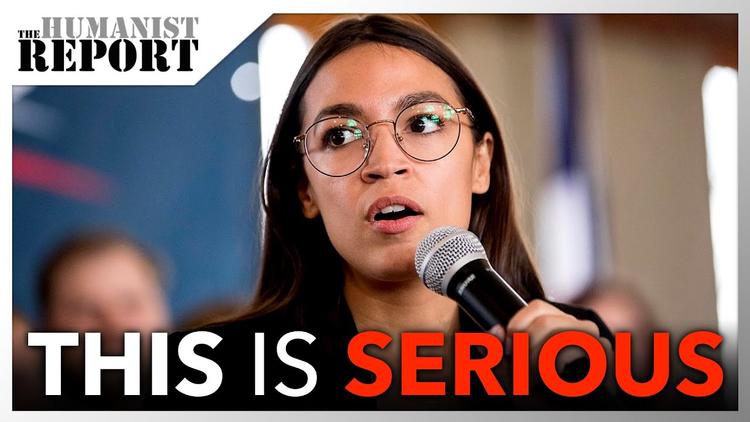 Ann Arbor (Informed Comment) – Tucker Carlson’s White Power Hour on Faux News was devoted in part on Friday evening to Rep. Alexandria Ocasio-Cortez (D-NY), known as AOC. Carlson polluted the airways with a mixture of woman-hating, sexual innuendo, and –surprise– racism. The racism took the form of attempting to induct Rep. Ocasio Cortez into whiteness, which as usual with Carlson boomerangs on him in demonstrating that “whiteness” is a meaningless category that can nevertheless be deployed to keep people down.

Michael Luciano at Mediaite reports that Carlson had a hissy fit over Rep. Ocasio-Cortez’s self-description as a “woman of color.” He ranted,

“No one ever dares to challenge that description, but every honest person knows it is hilariously absurd. There is no place on Earth outside of American colleges and newsrooms where Sandy Cortez would be recognized as a quote, woman of color, because she’s not! She’s a rich entitled White lady. She’s the pampered obnoxious ski bunny in the matching snowsuit who tells you to pull up your mask while you’re standing in the lift line at Jackson Hole. They’re all the same. It doesn’t matter what shade they are.”

This passage is classic, showing that “whiteness” has no reality to it at all. I pointed out that Carlson’s Italian-Swiss maternal ancestor Cesar Maurice Lombardi would not have been considered white by many Americans (Italians were lynched in Louisiana), and that Benjamin Franklin identified whiteness solely with Englishness, considering Swedes “swarthy.” So Carlson’s own claims to whiteness are historically shaky.

Carlson has voiced some miserably racist views, including calling Iraqis “semi-literate primitive monkeys.” So there is nothing surprising about his playing the race card in trying to bait the congresswoman.

Ocasio-Cortez certainly belongs to a group that has suffered racism. A study by Anna Santiago and George Galster notes that in the 1970s and 1980s the socio-economic status of Puerto Ricans in the mainland declined markedly compared to that of other minorities, and that they were of lesser status in that regard than Blacks. They were not, however, quite as residentially segregated as African-Americans. While Ocasio-Cortez’s father was an architect and the family moved to a middle class neighborhood, the ethnic group to which they belonged was suffering when she was born in the late 1980s.

They arrived at findings that

“suggest that 1) patterns of Puerto Rican segregation are a consequence of their economic status; and 2) the effect of segregation on median income is mediated by female headship and labor force participation rates. We also find evidence to suggest that the relationships between residential location and economic status for Puerto Ricans differ in important ways from those observed for Blacks and other Latino group.”

Nowadays, a majority of Hispanics in the US say that their skin color shapes their lives.

As for being white, Puerto Ricans have mixed feelings. About half have told pollsters over the years that they consider themselves white. But in the most recent census, those on the island of Puerto Rico who ticked “white” as their ethnicity plummeted by 80 percent. The Trumpian revival of open racist rhetoric in US politics and the contempt with which Trump treated them after their hurricane disaster (and his refusal to allow the government aid earmarked for them to reach them) may be part of the reason for which they have realized that they are not viewed as white by many Americans of northern European heritage.

“Whiteness” is a useless category from any rational point of view. It is visceral, used to include and exclude, arbitrarily. After years of deriding Ocasio-Cortez, who has a degree in international relations, as a low-class bartender, now Fox is dragooning her into whiteness in an attempt to deny her the right to represent people of color.

Carlson went on to cover himself in further shame, if that is possible, with what Ocasio-Cortez correctly characterized as “creepy” comments on her womanhood, which seemed to involve on-air sexually fantasizing about her.

Lloyd Green at the Guardian reports that Carlson commented on a passage in a new book about about her by Lisa Miller of New York Magazine, Take up Space: The Unprecedented AOC in which the congresswoman is described as “pointedly” saying into a camera, “I’m alone today”.

Carlson asked, “Is it just us or does that sound like an invitation to a booty call? Maybe one step from ‘What are you wearing?’”

Since there was no innuendo at all in the actual statement, it seems clear that Carlson is projecting his own desires onto the congresswoman and using his multi-million-dollar platform to fantasize about sexually possessing her.

You always knew it — Tucker Carlson is Jabba the Hutt.

Fox News poobahs have has a long history of sexual harassment of female staff, and the organization was fined $1 million for it last year. I once described the mandatorily blonde Fox News female anchors as “not so much hired as trafficked.”

So Carlson’s objectification of the congresswoman is par for the course at a Murdoch news property.

I genuinely want to know why Tucker Carlson is allowed/paid to engage in clear, targeted, libelous harassment that endangers people &drives so many violent threats that ppl have to fundraise for their own safety.

Why should they have to pay for his harassment? Make it make sense

Luciano at Mediaite reports that Carlson reacted against another passage in the book about Ocasio-Cortez that said that “the degradations of womanhood are deeply personal to her.”

Carlson griped about the representative, whom he insists on calling “Sandy Cortez,” “No one has done more personally to degrade American womanhood than Sandy Cortez has. She is living proof that 60 years of feminist liberation did not work. Sandy Cortez is not empowered. She’s neurotic and silly. She’s far more frivolous than any 1950s housewife ever was. June Cleaver was a more serious person. At least she made dinner.”

Carlson seems to have been on the verge, as he frothed at the mouth, of slipping into German and of shouting “Kinder, Küche, Kirche” (children, kitchen, church!)– the Nazi ideal for women. At least June Cleaver, the fictional mother and housewife of the 1950s situation comedy, “Leave it to Beaver,” cooked meals and raised children and went to church.

God forbid that women should step out of the house and actually exercise power in one of the branches of government.

Ocasio-Cortez’s website notes that “In her first term, the Congresswoman saw three amendments pass into law, despite Republican control of the Senate and Presidency. One shifted $5 million from the failed war on drugs to treatment for opioid addiction and another secured $10 million to clean up toxic bombardment sites in Puerto Rico. Most notably, the Congresswoman also worked with Senator Schumer to include a Funeral Assistance Program into the COVID-19 relief package. To date, the program has reimbursed over a billion in funeral expenses to Americans who lost loved ones to COVID-19.”

Last summer she also helped convince President Biden to extend the moratorium on evictions during the pandemic.

Since one of Carlson’s primary constituencies is slum lords, and think we now know the real reason he is so angry at her.