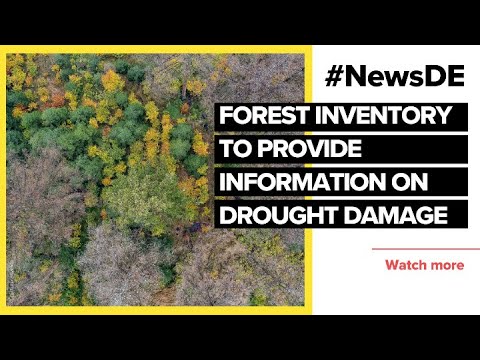 ( Clean Energy Wire ) – Researchers at the German Aerospace Center (DLR) have for the first time determined how much of Germany’s forests have been lost due to heat, drought and pest infestation using satellite-based Earth observation data. The results are alarming: From January 2018 through April 2021, tree losses were recorded on around 501,000 hectares in Germany. The loss corresponds to almost 5 percent of the country’s entire forest area — considerably higher than previously assumed.

The researchers detected large-scale losses in the forest stand and identified drastic damage, such as completely dead stands. The damage is visible in large areas of coniferous forests throughout central Germany. The western state of North Rhine-Westphalia alone lost more than a quarter of its spruce forests within three years, and in some districts it was even more than two-thirds. “Our analyses show that oak, beech and pine — the most common tree species in Germany alongside spruce — are also showing severe damage. The same applies to rarer species such as sycamore or larch,” said Frank Thonfeld of the DLR’s Earth Observation Center. Government reports on the condition of Germany’s forests have shown that they have been steadily deteriorating for a long time, he added. “But the damage over the past few years is unprecedented.”

Commenting on the findings, Jörg-Andreas Krüger, head of the Nature and Biodiversity Conservation Union (NABU), called for the rapid implementation of planned measures for near-natural forests, including forest conversion and the rewarding of ecosystem services by forest owners. “Drought summers, an overly one-sided focus on timber harvesting, pest infestations and storms have resulted in a forest crisis of unprecedented proportions.” While forests are facing irreversible damage, pressure to continue their exploitation – such as burning wood for energy – is increasing, he warned.

The state of Germany’s forests has been a cause for concern for several years and was fuelled by two execeptionally hot and dry summers in 2018 and 2019 that inflicted great damage on woodlands. As part of its Forest Strategy 2050, Germany’s agricultural ministry (BMEL) is seeking to make the country’s forests more adaptable to global warming so that they continue to help balance the country’s CO2 emissions.