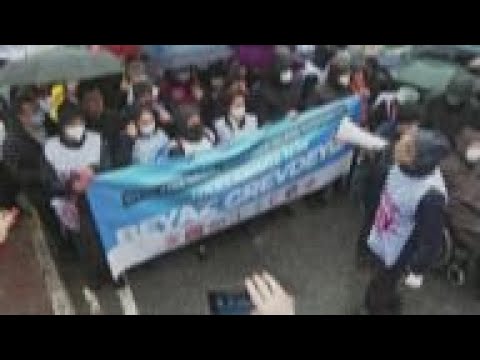 By Doga Celik and Arzu Geybullayeva | –

( Globalvoices.org ) – Prices are rising in Turkey and people have had enough. The leader of a Turkish opposition party recently tweeted he won’t be paying inflated electricity bills following January price hikes on basic commodities. At the same time, shop owners have been posting their electricity bills on shop windows calling for help, fearing bankruptcy. Meanwhile, scores of couriers, factory workers, and grocery store employees have been protesting across the country demanding minimum wage increases amid soaring inflation rates. For others, the only option remaining as a result of economic hardships is to leave Turkey in search of better employment opportunities abroad.

Despite an almost 50 percent increase of the minimum wage in December 2021, and promises by President Erdoğan to protect workers against the soaring prices, Turks continue to grapple with the new financial crisis as purchasing power decreased amid double-digit inflation and price hikes on gas, electricity, petrol, and road tolls as well as food and beverages. According to the Confederation of Turkish Trade Unions (Türk-İş) “Turkey’s poverty threshold increased to TRY 13,844 [$1,014.57] in January, more than three times the minimum wage [TRY 4,250= $311.46].” [13.64 Turkish liras equal a US dollar.]

It is against this backdrop that workers have taken to the streets in recent weeks, crossing occupational and class divides to demand fairer treatment.

It started with employees at the Trendyol courier service demanding raises in line with the country’s inflation rate and their minimum living costs. They protested by refusing to deliver packages and said they won’t return to work until their demands were met. Days later, the company employing the courier service, the online shopping website Trendyol, caved, promising 38.8 percent salary increases, from TRY 9,500 to TRY 12,500. Their victory triggered a wave of similar protests among other courier and delivery services — Yurtiçi Kargo, Scotty, Surat Kargo, Aras Kargo, Hepsijet, and Yemeksepeti — and in some cases, factory, and office workers too.

We resisted, we became one, we became power, we won! All Trendyol workers should contact us if they ever face even a minor injustice, we should preserve our unity for every one of our friends. Salute to our friends who are resisting during these cold, snowy times.

Since February 1, couriers serving YemekSepeti, an online food delivery company, have been on strike in front of the Yemeksepeti Istanbul headquarters “

For a 5500 TL raise and right to unionize, Yemeksepeti couriers are switching off their ignition.

“We barely make ends meet. I have no savings. After paying the bills, the rent, kitchen expenses, and my child’s expenses, I don’t even have a penny in my pocket at the end of the month,” explained one YemekSepeti courier in an interview with Reuters.

In an interview with AlMonitor, Erdem Yoruk, an associate professor of sociology at Koc University in Istanbul said, it was normal for strikes to erupt under the current circumstances. “We’re undergoing a really terrible economic crisis, and there’s a rapid rise in poverty and declining wages.”

According to AhvalNews, “Most of the recent strikes happened in companies where service providers are registered as individual contractors instead of employees, which removes most legal protections for the workers.”

In addition to couriers, several factory employees have also been on strike. DERİTEKS union organized a strike with Şimşek Socks, where they eventually got a 70 percent raise. Another sock factory, Alpin Socks’ strike resulted in an increase by TRY 2,500 and the guarantee that those who were on strike won’t be punished in any way. The Turkish labor union, Türk Metal has announced they have reached an agreement between metal workers and employers as well. They obtained a 65.7 percent raise.

Migros, a supermarket chain, is currently the scene of a strike as well. The employees have not accepted the corporate offer of an eight percent raise, and have gone on strike. They are instead requesting a 70 percent increase. On February 8, some 150 employees were detained after staging a sit-in at the store’s warehouse while some 120 were fired from their jobs according to reporting by Gazete Duvar English service. On February 11, the company confirmed it dismissed more than 250 workers.

Employees at Digiturk, a Turkish satellite television provider, are also on strike after refusing an offer of a 17 percent raise.

In addition to workers’ strikes, thousands of Turks took the streets across several cities to protest high electricity bills. According to Gazete Duvar English service, the protests erupted after a 50 percent electricity price hike that came into effect on January 1. “For some businesses, electricity bills tripled within a month. Enterprises are saying that they can no longer cope with the exorbitant prices and have come to the point of bankruptcy,” reported the online news platform. Joining the protests was also Kemal Kılıçdaroğlu, the head of the Republican People’s Party, who said he won’t pay “his electricity bills until the government reverses price hikes,” according to reporting by Bloomberg.

Medical professionals are also on strike

The most recent group to join the strikes is Turkey’s medical staff. On February 8, the group went on a one-day nationwide strike in an attempt to call for better wages. The strike was initiated by the Turkish Medical Association (TTB) who said in their statement, “We, whose labor is ignored, whose professional values are ignored, whose working conditions are unhealthy, and whose working areas are insecure, say, ‘Enough is enough, now it’s time for Strike!’”

Doga Celik, author and translator, is a specialist political science and international relations.