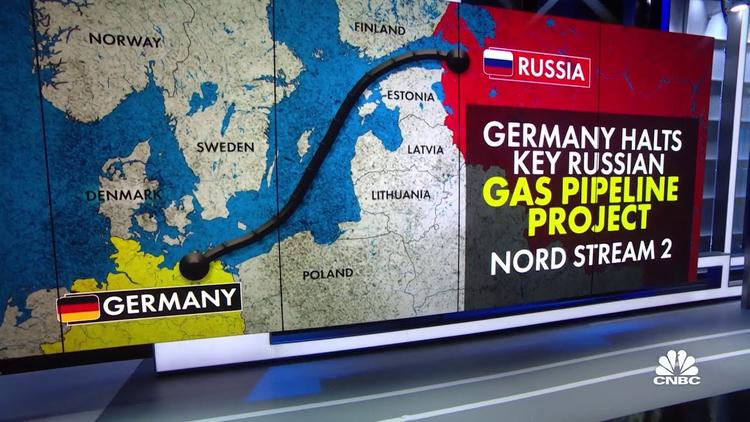 Ann Arbor (Informed Comment) – On Tuesday, Germany’s socialist Chancellor, Olaf Scholtz, suspended the permitting process for the Nord Stream 2 methane gas pipeline that had been built to bring Siberian gas to Germany, over Russia’s declaration that two Ukrainian provinces were independent states. The $11 billion pipeline has already been constructed, but was awaiting German government permits to begin operating. It may well now be an $11 billion boondoggle.

I am interested in what the possible cancellation of this project will mean for Germany’s Energy Switch to renewables, which is the most ambitious and advanced in the G7 industrialized democracies. Germany got 41 percent of its electricity from renewables in 2021. I have pointed out that the meme among pundits that Germany was wrong to commit to closing its nuclear plants is incorrect, since they don’t provide that much of the country’s electricity and they were old and dangerous. Building new nuclear plants is very expensive and will take many years, whereas solar and wind farms are cheaper and can be stood up in a couple of years. The 11 percent of the country’s electricity that they supply should be replaced by wind, solar, and batteries. Now that Nord Stream 2 may not happen, is it more likely that Berlin will make a full court press to put in more wind and solar?

So what are environmentally-conscious Germans saying about this crisis? Well, they appear to be relieved and happy that the pipeline may never be activated.

Brigitte Scholtes at the German news site ZDF Heute interviews Claudia Kemfert, head of Energy, Transport and Environment department at the German Institute for Economic Research, about the suspension of the proposed Nord Stream 2 pipeline from Russia to Germany.

Dr. Kemfert explained that if the crisis goes on for a while, it probably means that that suspension will turn into a full cancellation.

Germany now gets about 55 percent of its methane gas imports from Russia, and Nord Stream 2 would have raised that to 70 percent.

She insists however, that the pipeline was always a white elephant and that “We do not need this pipeline.” She dismissed it as unprofitable, unnecessary and damaging to the climate, not to mention “geopolitically harmful.”

Asked if the suspension would cause Germans to freeze this winter, Kemfert pointed out that the pipeline has never been put into operation is not providing any energy, and so is irrelevant to Germany’s current energy situation.

She says that Germany should be trying to replace methane gas with renewables, and if it needs gas in the meantime, can always import Liquefied Natural Gas (LNG) by sea. [Germany does not have LNG terminals at the moment but can presumably build some.]

She adds, “What is important now, however, is to say goodbye to fossil natural gas as quickly as possible.”

She pointed out that some of the slack can be taken up by energy conservation and curbing consumption. Many buildings heated by methane gas are not properly insulated, and putting in the insulation is far cheaper and less environmentally harmful than importing more gas.

But the real solution, she says, is an all-out effort to replace methane gas with wind and solar. She said, “The government must help industry to invest in energy saving and in the use of alternative energies.”

She observed, “Renewable energy has a price-sinking effect. If energy is then saved, the costs can fall permanently.” Her point is that once the infrastructure is put in place, wind and solar are extremely inexpensive and are falling in price rapidly, unlike fossil fuels, which are rising in price. Consumers can get a permanent reduction in electricity and heating costs if renewables come to predominate.

Nord Stream 2 has a green-washing foundation associated with it, based in the northeastern state of Mecklenburg–Western Pomerania, headed by that state’s former head, the Social Democratic Party (SPD) politician Erwin Sellering.

The state’s Green Party severely criticized the foundation for misrepresenting Nord Stream 2 as part of the climate solution for Germany. The DPA wire service reports that the state chairman of the Greens, Ole Krüger, said that the foundation misrepresents itself as a climate protection institution but “has nothing to do with climate protection and only acts as an extended arm of Gazprom.” Gazprom is the major Russia methane gas producer and distributor.

He added that the foundation, which argued that methane gas is needed as a transitional fuel during Germany’s “Energy Switch” to renewables, should instead recognize that the gas pipeline is not needed for the energy switch. “Rather, it threatens to extend the climate-damaging process of natural gas extraction for decades.”

Katharina Horn, spokeswoman for the youth organization of the Greens criticized SPD politicians in the state who have supported Nord Stream 2 to the hilt.

The German Green Party is in coalition with the Social Democratic Party at the national level in Germany now, and often chafes that the socialists are not taking the climate emergency sufficiently seriously.

It seems at least possible that a cancellation of Nord Stream 2 could strengthen the hand of the Greens within the ruling national government and permit them to argue that the government should do more to ensure a rapid transition to green energy.