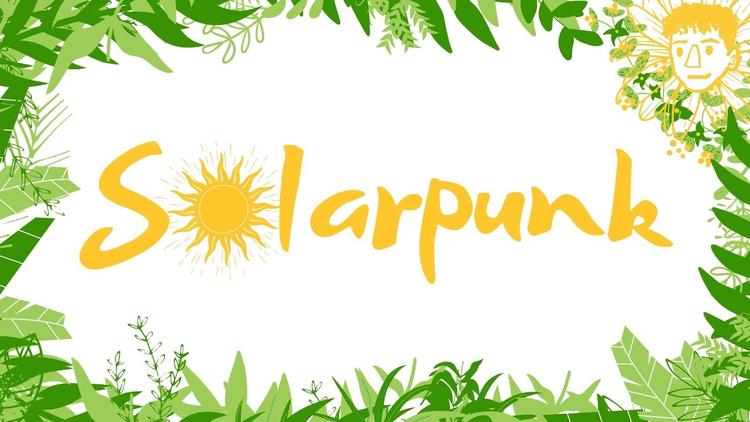 What does a sustainable civilisation look like and how do we get there? A burgeoning movement of artists and activists is seeking answers.

( China Dialogue ) – “It is 2050. In most places in the world, the air is moist and fresh, even in cities. It feels a lot like walking through a forest, and very likely this is exactly what you are doing. The air is cleaner than it has been since before the Industrial Revolution. We have trees to thank for that. They are everywhere.”

In the current moment, these words from Christiana Figueres and Tom Rivett-Carnac’s 2020 book The Future We Choose might seem like pure fantasy. The world they describe seems so far from the present, where over 90% of the Earth’s population breathes air

But a burgeoning artistic and political movement known as “solarpunk” is trying to bring this lush, verdant world closer to reality.

A gardener tends to her lot in a jungle city. In solarpunk futures, cities are reimagined as havens of biodiversity, teeming with wild animal and plant life. (Illustration: Marcel Mosqi)

Solarpunk imagines an optimistic future where humans have overcome the major environmental and social crises of our time and in the process created a safe, just world powered by clean energy and organised around collaborative social ideals.

Article continues after bonus IC Video
What is Solarpunk?

It rejects the pessimism of cyberpunk, which paints the future as a corporate-controlled and environmentally degraded dystopia. As stated in a manifesto written collectively by the online solarpunk community, “as our world roils with calamity, we need solutions, not only warnings”.

In contrast to today’s industrial-scale animal agriculture – a major source of carbon emissions and cause of declining biodiversity – rural livelihoods in a solarpunk future centre around self-sufficient, small-scale farms (Image: Fernanders Sam)

The concept of solarpunk originally emerged in the late 2000s, when a handful of artists on the social media platform Tumblr began sharing drawings of futuristic green cities. Over time, the aesthetic and ethos evolved into a more robust vision for the world, and in the process has been embraced by other art forms. There are now published collections of solarpunk literature, subgenres of music, movements within architecture and even tabletop role-playing games.

At the core of this vision is the idea that humans can coexist in harmony with the rest of nature. A solarpunk world is one where vast swathes of land have been returned to wilderness, rooftop gardens dot the skylines of high-tech cities and vertical farms provide food to their residents.

A visual timeline (left to right) of Shanghai, China, over the course of its century-long transformation into a solarpunk metropolis. By the year 2100, advancements in biotechnology have reshaped the city, blurring the distinction between natural and manmade structures. (Image: Luc Schuiten – Architect)

Responsible use of technology is also a prominent theme. Solar, wind and wave power have entirely replaced fossil fuels as sources of energy, while widespread 3D printing has made it much easier to produce things locally, creating resilient, self-sufficient communities.

Increasingly, artists and writers in the solarpunk movement also describe a world that is just and safe for marginalised groups – especially those facing the brunt of the climate and ecological crisis today. “BIPOC [black, indigenous and people of colour] and queer people are safe in solarpunk futures,” says Brianna Castagnozzi, co-editor-in-chief of Solarpunk Magazine.

A girl gazes up as a parrot flies overhead in an Art Nouveau-inspired solarpunk city (Illustration: Rita Fei)A farmer in Brazil collects food from his agroforestry farm, while a drone waters crops from above (Illustration: J. Queiroz)

Although it may seem utopian and idealistic, solarpunk attempts to answer real questions being asked more and more often in light of the unfolding climate and ecological crisis. What can be saved? What does a truly sustainable civilisation look like? How do we get there?

It may be a big ask, but it’s increasingly clear that the scale of the environmental crises facing humanity demands transformational changes to the way we live, as well as the way we think. Art has the power to shape our attitudes, so perhaps it’s time – as Nigerian poet Ben Okri said recently – for artists of all kinds to “dedicate our lives to nothing short of re-dreaming society”.

Joe Coroneo-Seaman is the Production Assistant at China Dialogue. He has lived and worked in Greater China for 2 years, and has an MA (Hons) in Chinese and French from the University of Edinburgh.

Via the Creative Commons BY NC ND licence.