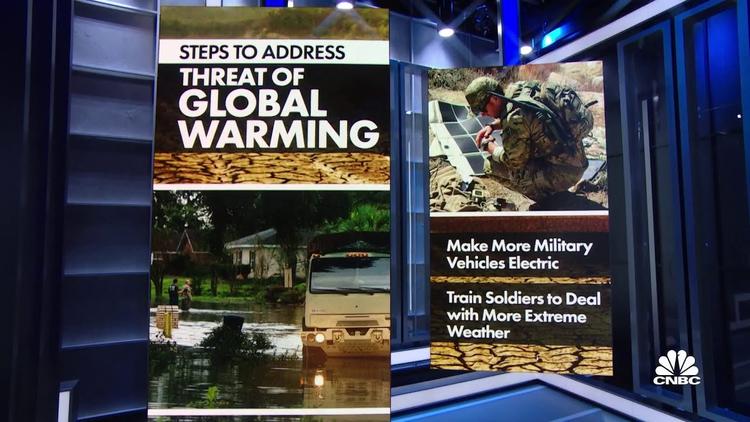 Ann Arbor (Informed Comment) – The US military has been worried deeply for over a decade about the impact of the climate emergency on its bases and operational readiness. The Department of the Army has just released its first Climate Strategy for dealing with what Secretary of Defense Lloyd Austin calls an “existential crisis.”

The report warns that the drastic changes in our climate that we are inflicting on ourselves by burning gasoline, methane gas and coal will stress the military by causing “energy and water scarcity; damage to installations and infrastructure; displacement of and disruptions to operations, supply chains, and logistics; and imperiled Soldier health through exposure to airborne irritants like smoke and dust, disease vectors, and temperature extremes.”

The Army’s response to these challenges is in part to model climate action, setting these goals:

The Army produces greenhouse gases through base consumption of electricity generated by fossil fuels, through heating and air conditioning, and through transportation.

In accordance with the Biden administration’s emphasis on moving to electric vehicles, the Army is urgently greening its transportation: Not counting military vehicles like tanks and armored vehicles, the Army has a lot of passenger cars. It announced a goal of “fielding “an all-electric light-duty non-tactical vehicle fleet by 2027.” That is a short deadline, only five years! It also wants to electrify the tactical vehicles by a few years later.

The US military maintains a fleet of 170,000 non-tactical vehicles. President Biden wants them all replaced with EVs, and the Army is gung-ho. The more EVs that are bought, the cheaper and more efficient they will get, so the Army’s purchases will help drive improvements in electric vehicles. These vehicles will increasingly be charged with carbon-free electricity.

Among the Army’s most ambitious just-announced goals is, “Provide 100% carbon-pollution-free electricity for Army installations’ needs by 2030.”

The challenges here are substantial. There are 1.9 million active-duty military personnel, 480,000 of them in the Army. The military maintains over 450 bases in the United States.

The report admits, “The Army purchases over $740M of electricity from the national electric grid every year. In 2020, this electricity added 4.1 million metric tons of carbon dioxide as well as methane, nitrous oxide, and other GHGs into the atmosphere.”

But the Army wants to change all that in the coming decade: “Going forward, the Army will actively pursue carbon-pollution-free electricity production and storage to and on its installations. The Army looks to its real property assets to continue providing space for new renewable energy projects that both reduce GHG emissions and increase energy resilience.”

So it sounds like some of the land the Army has on and around its bases is going to be dedicated to solar and wind farms, so that it will become a green energy generator itself. It is also going to play hard ball with the electric utilities that supply power to the bases, demanding they purvey green electricity. In some parts of the country, the impact of this Army policy could be substantial.

Over six years ago, I covered a climate crisis conference in Hawaii for The Nation in which the US Army participated and I wrote then:

“Amanda Simpson of the Army Office of Energy Initiatives told the summit that Army bases throughout the United States have seen a quadrupling in electricity outages during the past decade, some of them caused by more frequent extreme weather events, others by aging equipment and infrastructure. It seems clear that Hawaiian bases want back-up solar farms and biofuel plants in case the civilian grid falters. Simpson pointed out that all Hawaiian energy plants presently are on the coasts and so are vulnerable to a tsunami or to rising sea levels caused by the melting of polar ice because of global warming.”

The very security and functioning of Army bases are threatened by the climate crisis. It is indeed an existential crisis. The response will be to be “Army Strong” by going green.