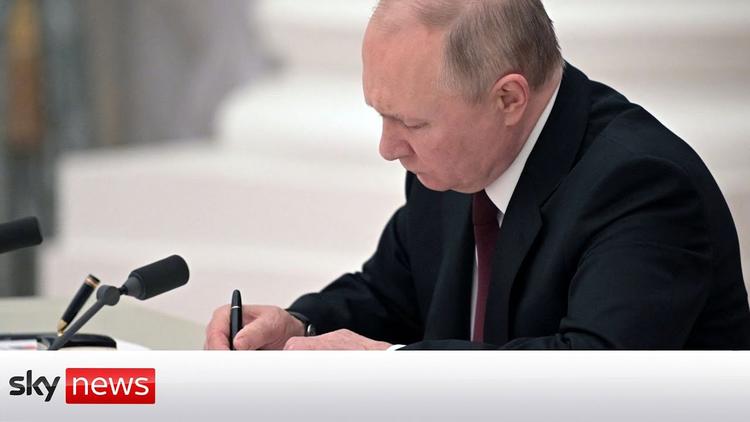 Ann Arbor (Informed Comment) – In his incendiary speech on Ukraine on Monday, Vladimir Putin alleged that Ukraine does not really exist, that it is an artificial construct of the Communist period, crafted by Vladimir Lenin. He declared, “Ukraine never had a tradition of genuine statehood.”

When I heard that, it reminded me of the Israeli propaganda line that there has never in history been a Palestine. Denying a people their right to national sovereignty today by arguing that they lacked it in the past thus seems to be a typical move of expansionist states like Russia and Israel, bent on dominating their neighbors.

There has, of course, been a set of attributes making for “Ukraine-ness” in history, just as there has been a set of attributes making for “Palestinian-ness.” In the late Roman Empire of the late 500s and early 600s, there were actually three major provinces called Palestine, whose inhabitants were predominantly Christians speaking Aramaic and Arabic but using Greek for administrative purposes. After the rise of Islam, those Christians adopted Arabic and became bureaucrats for the new Islamic empires. They continued to call their local region Palestine (Filastin), as is attested by some medieval Muslim coinage. Like the Ukrainians, they were subsumed under empires. In the case of the Palestinians, who eventually largely embraced Islam, the most recent big empire to which they belonged had been the Ottoman. Both Israel and Palestine are in important ways successors to the Ottomans.

But the fact is that all nation-states, including Israel and Putin’s Russia are modern inventions and are constructed and artificial, though they are constructed from traditions. Ukrainians and Palestinians can’t be declared more artificial, because they aren’t. Modern Hebrew is a constructed language, just as is modern Hindi in India or modern Turkish in Turkiye. It is only a nationalist illusion that can attempt to connect the contemporary Israeli state, with its polyglot population, to ancient Israel. In the same way, contemporary Russia can’t be read back into the fabled Rus’ Khaganate of the 800s, apparently a mixture of Swedes and East Slavs whose exact geographical location is disputed.

Soon after Ukraine became an independent country in the early 1990s, Mark Hagen published an article entitled “Does Ukraine have a History?” He argues that the modern historiography of nations arose in Western Europe, and considered Britain, France and Spain to be “real” countries, while the Eastern European peoples were under the rule of the Russian, Austro-Hungarian or German Empires and so were obscured from view as nations.

He doesn’t say so, but actually even in 1850 when the historiography of nations was flourishing, the French were quite diverse, with Basque, Breton and Provencal speakers, and “France” included Algeria, French Guaiana in Latin America, some Caribbean islands and Pondicherry in India. Like the Ukrainians, the French lived in an empire. Britain’s Queen Victoria at that time ruled over far more Indians than English. There is some sense in which the stand-alone non-imperial nation-state is very late, a post- WW II development.

Hagan writes, “Czechoslovakia, Hungary, Romania and especially Ukraine are suspect candidates in the international order and somehow undeserving of the prerogatives of genuine statehood.” When those empires collapsed during or in the wake of World War I, the Eastern European peoples gradually came under the rule of either Nazi Germany or the Soviet Union, so that their nationhood continued to be obscured to North Atlantic historians.

Likewise, Soviet ideology denounced nationalism as a form of backwardness and looked forward to the emergence of a monochrome “Soviet people,” so that, he says, the distinctiveness of Ukrainian history was suppressed by Moscow.

He warns that with the emergence of an independent Ukraine and the coalescing of expatriate Ukrainian academics (especially in Canada) around a national narrative, there is a danger of essentialism, of imagining an eternal and monochrome Ukraine through history that was covered up by the empires. He warns, “The political history of early twentieth-century Ukraine, with its rich array of socialists, liberals, conservatives, federalists, integral nationalists, Bundists, Zionists and Russian nationalists, betrays such efforts at reductionism.”

He points to the many discontinuities that impede trying to create a concrete Ukraine through history. Its elites were often absorbed by the Polish or Russian upper crust. Its church traditions are not always distinctive. Its language was repressed by the Tsars in the late 19th century. Its contemporary territory includes lands that once belonged to Austria, Russia or Poland. All the markers of Ukrainian identity have been fluid and discontinuous.

Hagan points, however, to the finding of historians and social scientists that nations are a modern phenomenon for all peoples.

Here I will weigh in and point to Eric Hobsbawm’s observation that there was no “Italy” in 1800 — it was split among empires and local potentates. Italian was a set of disparate dialects — some might just as well have been called languages in their own right, and were as little as 50% mutually comprehensible across the peninsula. Hobsbawm said that people think that nations create states, but it is states that create nations. After the Italian resurgence and the establishment of the modern Italian state, state schools and the newspaper began spreading standard Italian.

The recent character of nations and nationalism and their fluidity and discontinuity are therefore not unique to Ukraine or Palestine. The histories of peoples are the raw materials out of which nationalists construct their imaginary of the contemporary nation, and this is a universal.

The lack of a “nation” in the past is no warrant for denying rights of sovereignty to people today. Large numbers of today’s nation-states have no ancient antecedents. There was no ancient Brazil or Argentina, no ancient Pakistan or Central African Republic. All nations are new, all languages have been reconstructed. No one speaks Old English or Old French or Romance today. There aren’t “real” nations and “artificial” nations.

Ukrainians and Palestinians have centuries-long national traditions, just as Israelis and Russians have, and deserve to be citizens of their independent states, deserve to be full human beings with full human rights. Misuses of history cannot deprive them of those rights.