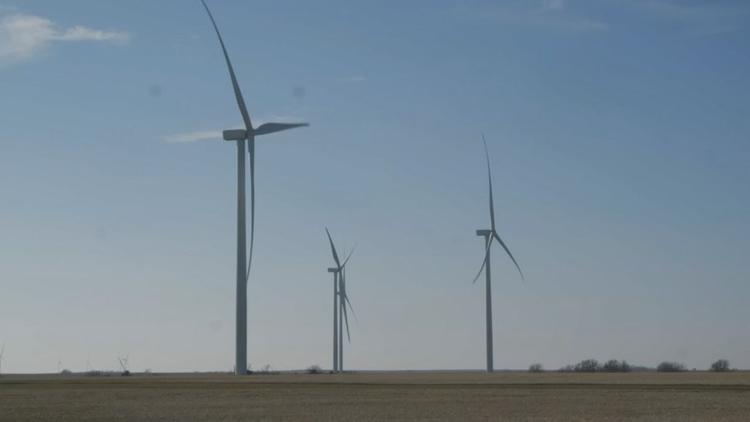 Ann Arbor (Informed Comment) – This week, American Electric Power (AEP), which operates in several states, inaugurated what it called the largest wind farm in the US ever built all at once. That is, there are larger wind facilities, but they were actually a congeries of several projects built over many years.

The nearly 1 gigawatt Traverse Wind Energy Center, in Blaine and Custer counties in western Oklahoma, generates power not only for that state but also for Arkansas an Louisiana.

Mark Williams at the Columbus Dispatch writes, “Traverse has 356 turbines that are nearly 300 feet tall. Most of the blades go up to nearly 400 feet in height.”

AEP will get there in part by closing its sole remaining coal-fired plant in 2026. So we can see the realities on the ground, and the future does not belong to coal barons like Joe Manchin.

Wind farms accounted for 35 percent of Oklahoma’s electricity production before Traverse came online. The state has about 4 million residents and about a million and a half households.

The $2 billion Traverse wind farm and two smaller facilities will power 440,000 households, around 30 percent of all households in the state.

It is remarkable that so many large investments are being made in wind power in Oklahoma, since the state is known as an oil and gas giant. It accounts for 8.7% of the methane gas produced in the US annually.

There is a difference, however, between fossil fuels and wind power. The fossil fuels are expensive, and wind has been dropping rapidly in price. Rhett Morgan at Tulsa World reports that the North Central Energy Facilities (NCEF) wind complex will save consumers $1 billion over the next 30 years.

Oklahoma ranked third in the nation for wind power before this addition.

The new wind farm, moreover, has “cold packs” allowing it to operate in freezing weather of the sort that hit Oklahoma and Texas in February of 2021. Despite the lies and propaganda of Texas governor Greg Abbott, the problems Texas had last year mainly derived from the failure of methane gas plants in the freezing weather, and most wind turbines worked fine. The Traverse facility will be even better, designed for operating even in such cold conditions.

It is estimated that if Oklahoma had already had the Traverse facility operating in February, 2021, it would have saved consumers $200 million.

The North Central Energy Facilities of which Traverse forms a part generate 1,484 megawatts of power. This makes them one of the biggest wind facilities in the country. They are not the very biggest, however.

USA By Numbers writes, “With a nameplate capacity of 1,550MW, Alta Wind Energy Center is by far the biggest wind farm in the US. It is located in Tehachapi Pass, Kern County, California and occupies a total area of 130 square kilometers. Alta was established in 2010 and had a construction cost of over $2.8 billion.”

So there you have it. Even in a gas and oil state, customers are saving a billion dollars by switching to wind. That is the future, my friend. As for the gas and petroleum, most of it will become worthless and will stay in the ground as wind and solar costs continue to plummet.