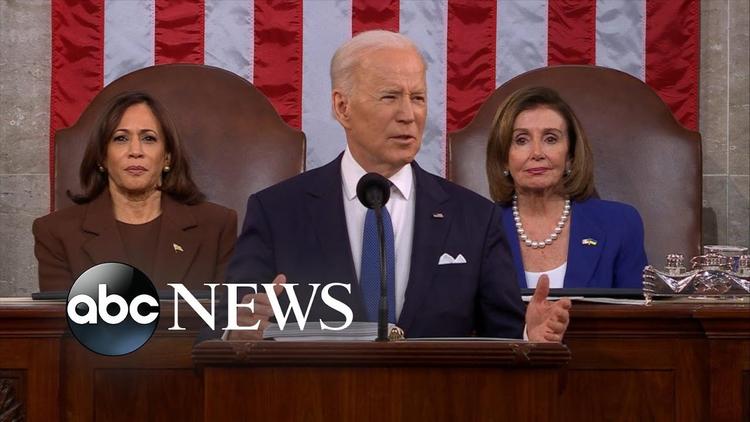 Pundits were always declaring that Donald Trump’s response to some crisis was “the day he became president.” They made themselves look a little silly, though, since there was nothing presidential about the loony tunes Trump, and nor will there ever be.

In contrast, it does seem that in his address, Biden took on a truly presidential stature. Biden’s calls for national unity in the face of an aggressive Russia drew more bipartisan applause than has been common from Congress during the SOTU in recent years.

The big announcement came when President Biden declared, “And tonight I am announcing that we will join our allies in closing off American air space to all Russian flights – further isolating Russia – and adding an additional squeeze –on their economy. The Ruble has lost 30% of its value.”

Some presidents get a bump from facing a foreign policy challenge, but it is yet to be seen if that will be the case here. One problem Mr. Biden faces is that the US is actually on the sidelines and has no control over Russian actions in Ukraine. Washington can punish Russia with sanctions, but those are unlikely to deter Vladimir Putin. Rulers in oil states cocoon themselves, carefully keeping themselves beyond the reach of any harm deriving from sanctions. Sanctions never brought down Iraq’s Saddam Hussein, or the Burmese junta, or Iran’s ayatollahs. Sanctions mainly hurt ordinary people, and in authoritarian states the people seldom have the ability to overturn the Establishment. They can sometimes unseat an individual, but often someone else from the power elite just takes his place.

So if, God forbid, Kiev in the end falls to Putin, Biden can only ratchet up economic sanctions further. But Putin will still be in Kiev, which won’t be a good look for Washington.

At the moment, however, Biden looks decisive. A Reuters/ Ipsos poll found that public approval of Biden’s handling of the crisis shot up 10 points over the past week, from 34% to 43%.

Still, 57% of Americans disapprove of his handling of the crisis. I am not sure what they expected him to do; he can hardly risk war with another nuclear-armed state, and for Biden to send weaponry to Ukraine to kill Russian troops with, as the president is in fact doing, is already skating pretty close to a nuclear crisis. Putin himself has said as much.

Article continues after bonus IC video
ABC News: “Biden remarks on crisis in Ukraine during State of the Union address”

Biden in his speech attempted to use the Russian actions as a rallying cry for Americans across the board. He said,

“Last year COVID-19 kept us apart. This year we are finally together again. Tonight, we meet as Democrats Republicans and Independents. But most importantly as Americans. With a duty to one another to the American people to the Constitution. And with an unwavering resolve that freedom will always triumph over tyranny.”

These were strong applause lines, except to the pro-Putin fascist wing of the Republican Party, or its QAnon cultists.

Biden praised the steadfastness of the Ukrainian people, which has indeed been impressive: “From President Zelenskyy to every Ukrainian, their fearlessness, their courage, their determination, inspires the world.”

He said that Putin had not reckoned with this defiance and had expected his invasion to proceed smoothly. That may be, but the campaign is only a week old and Ukraine is badly outmatched, and it remains to be seen if Ukraine can remain defiant. A win for Putin in Eastern Ukraine, at least, would cause Biden’s applause lines to dry up. I say “eastern Ukraine” because there is some thinking that he won’t go to the west of the country, where Catholics predominate rather than Eastern Orthodox.

Biden effectively enlisted Congress in his rhetorical performance, in which he called out Vladimir Putin: “Let each of us here tonight in this Chamber send an unmistakable signal to Ukraine and to the world. Please rise if you are able and show that, Yes, we the United States of America stand with the Ukrainian people.”

Biden used the occasion to justify NATO’s continued existence after the end of the Cold War, though some analysts would say that some of the blame for the war falls on NATO expansionism, which put Russia in the position of a cornered rat and made conflict more likely. I don’t think it is fair to say that NATO caused this war. Putin caused this war. But NATO expansion was done in a heavy-handed way and did contribute to tensions.

The president was brutally frank about his new adversary: “Putin’s latest attack on Ukraine was premeditated and unprovoked. He rejected repeated efforts at diplomacy. He thought the West and NATO wouldn’t respond. And he thought he could divide us at home. Putin was wrong. We were ready.”

The White House is aware that there is a danger of President Biden looking as though he is not in control. And, of course, presidents aren’t in control of the things bothering Americans right now. Biden can’t control the novel coronavirus and its variants, though he made a good case for the successes of his administration in getting the vaccine out to people who would take it. Biden cannot control global supply lines or inflation that derives from pent-up demand during the pandemic. He cannot control world energy prices. He cannot control the army of the Russian Federation.

So Mr. Biden attempted to underline the steps that were in his power to take regarding the Russian invasion of Ukraine:

“Here is what we did.

We prepared extensively and carefully.

We spent months building a coalition of other freedom-loving nations from Europe and the Americas to Asia and Africa to confront Putin.

I spent countless hours unifying our European allies. We shared with the world in advance what we knew Putin was planning and precisely how he would try to falsely justify his aggression.

We countered Russia’s lies with truth.

And now that he has acted the free world is holding him accountable.

Along with twenty-seven members of the European Union including France, Germany, Italy, as well as countries like the United Kingdom, Canada, Japan, Korea, Australia, New Zealand, and many others, even Switzerland.

We are inflicting pain on Russia and supporting the people of Ukraine. Putin is now isolated from the world more than ever.

Together with our allies –we are right now enforcing powerful economic sanctions.

We are cutting off Russia’s largest banks from the international financial system.

We are choking off Russia’s access to technology that will sap its economic strength and weaken its military for years to come.”

Biden also said he has asked the Department of Justice to trace the money of corrupt Russian oligarchs, who have enormous funds and properties in the U.S.: “We are joining with our European allies to find and seize your yachts your luxury apartments your private jets. We are coming for your ill-begotten gains.”

The president announced that “The Russian stock market has lost 40% of its value and trading remains suspended. Russia’s economy is reeling and Putin alone is to blame. Together with our allies we are providing support to the Ukrainians in their fight for freedom. Military assistance. Economic assistance. Humanitarian assistance. We are giving more than $1 Billion in direct assistance to Ukraine. And we will continue to aid the Ukrainian people as they defend their country and to help ease their suffering.”

Mr. Biden then paused to emphasize that that he does not want to play brinkmanship: “Let me be clear, our forces are not engaged and will not engage in conflict with Russian forces in Ukraine. Our forces are not going to Europe to fight in Ukraine, but to defend our NATO Allies – in the event that Putin decides to keep moving west. For that purpose we’ve mobilized American ground forces, air squadrons, and ship deployments to protect NATO countries including Poland, Romania, Latvia, Lithuania, and Estonia.”

Perhaps the biggest applause line of the night was,

“As I have made crystal clear the United States and our Allies will defend every inch of territory of NATO countries with the full force of our collective power.”

But Putin is not going to attack NATO territory with conventional forces, so it is an applause line without a cost to the president.

Mr. Biden underlined that sanctioning Russia would boomerang on Americans, who would also feel some economic pain, especially in energy prices. Here again, the president attempted to look pro-active, saying that he and 30 allies would release 60 million barrels of petroleum from their reserves. That is, again, merely symbolic action that will have no significant or long-lasting effect on oil prices.

There may or may not be much of a political yield in blaming Putin for the high prices at the pump. It was clear that the gasoline crisis in the late 1970s was in part the fault of the Iranian Revolution and the ayatollahs, but people were still angry at Jimmy Carter over it.

Biden is not wrong that these are united and strong actions, the strongest that probably can be taken without risking war between two nuclear powers. There is a thin line between sanctions that are only symbolic and those that bring the pain. There is an even finer and more perilous line between sanctions that bring the pain and those that are so harsh and unrelenting that they provoke further conflict in and of themselves.

We can see this effect with Iran, which was on the receiving end of Trump’s “maximum pressure” sanctions, and which replied by blowing up Saudi Arabia’s Abqaiq refining facility and endangering the world’s petroleum supplies for a brief period. That Russia will find ways of hitting back over the collapse of its economy is plausible, but what form it would take, exactly, is unclear. We aren’t out of the woods yet, on this one.