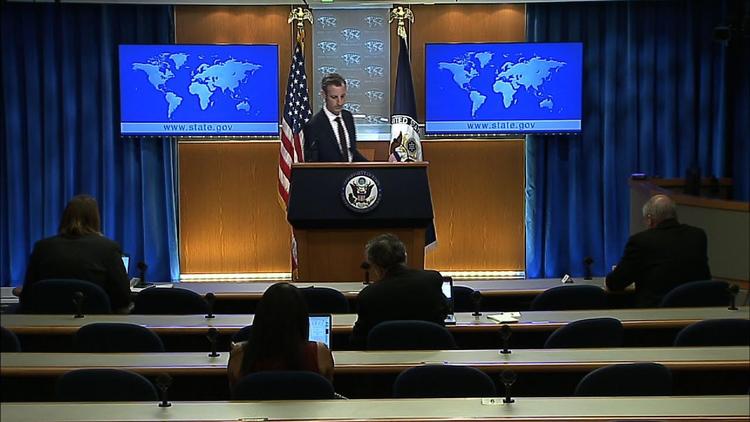 Ann Arbor (Informed Comment) – The United States cannot afford to impose severe economic sanctions and boycotts on Russia and on Iran at the same time. That way lies $300 a barrel oil, global economic retraction, and likely a Democratic Party bloodbath in the midterms as voters protest their anguish at the pump.

There is a pathway for Washington to lift the international boycott of Iran led by the US, which is a restoration of the Joint Comprehensive Plan of Action (JCPOA) or 2015 Iran nuclear deal. Negotiations in Vienna appear to be on track for success, and it is likely because President Biden suddenly needs this win. Iranian petroleum exports could be ramped up quickly to replace those of Russia.

In his speech on the occasion of Nowruz, the Persian New Year, Iran’s “august leader” Ayatollah Ali Khamenei recalled his emphasis the previous year on avoiding “tying the country’s economy to American sanctions,” saying that this policy would obtain as long as sanctions are imposed. He observed that the country has been able to achieve substantial economic progress despite the US sanctions.

He quickly added, however, “Of course, I am not saying in any way that you should not seek to lift the sanctions; and the people engaged in this quest should continue.” Observers are taking this as a sign that he has given a green light to a successful conclusion of the Vienna negotiations on restoring the JCPOA to full implementation by both Iran and the United States. Given the growing sanctions on Russia, Iran could reap a tremendous windfall if it can compromise with the world community and with Joe Biden.

Mark Thompson and James Frater at CNN report that “Canada, the United States, the United Kingdom and Australia have already banned imports of Russian oil, affecting roughly 13% of Russia’s exports.” With all the sanctions and boycotts, Russian production could be cut by 3 million barrels a day, they write. Russia produces 11.3 million barrels a day and exports 5 million b/d, plus another 3 million in various petroleum products.

But world demand for energy is high as the global economy recovers from the pandemic, so if Russian oil and gas stay in the ground, prices will skyrocket unless other suppliers ramp up production. So far the Organization of Oil Exporting Countries is declining to increase output substantially, and while Qatar, a major producer of methane gas, wants to increase shipments, it will take time to do so.

Hence the importance of Iran, which has a substantial petroleum industry and one of the largest methane gas reserves in the world.

CNN’s Thompson and Frater further report that the European Union has begun talking about scaling back imports of petroleum, methane gas and coal from Russia, but admit that it will take them years to do so. Europe gets 40% of its methane gas from Russia, 27% of its petroleum an 46% of its coal. (Coal? Why in the world would anyone still be burning coal? That is a planet-killer.) They say that the EU has already committed to reducing Russian methane gas imports by 66% this year. Germany, however, admits that it just can’t cut back that way.

Some of the Russian fossil fuels can be avoided by better conservation — insulating buildings and reducing automobile use. Some can be replaced by wind, solar, hydro and batteries, though wind and solar farms typically take two to three years to come on line. Some of those in the pipeline could be fast-tracked. Electric vehicle purchases could be vastly increased by government policy, as Norway has shown. Norway taxes automobile purchases heavily but makes an exception for EVs, and so in January 83.7% of new cars bought in that country were electric– the highest rate in the world. France’s President Emmanuel Macron is talking about a government-backed lease to own program for consumers who buy electric vehicles.

But in the short to medium term there will nevertheless be a shortfall of energy available if the current US policy of massively sanctioning both Iran and Russia continues.

In 2017 Iran was producing 4 million barrels a day of petroleum and exporting 2.5 million barrels a day. After Trump’s financial and trade embargo was imposed beginning in 2018, Iran’s production fell dramatically and its exports dwindled by May of 2019 to almost nothing.

This year Tehran is producing 2.4 million barrels a day and is estimated to be exporting (smuggling is more like it) some 800,000 barrels a day, mainly to China. So the US took nearly 2 million barrels a day of petroleum off the world market with this attempt to strangle the Iranian economy. Trying to keep that up while also sanctioning Russia into the ground will make prices soar like a hypersonic missile.

While Iran could likely ramp back up to four million barrels a day of petroleum, and 2.5 million for export, relatively quickly, its methane gas industry has been savaged and retarded by US sanctions so much that it will take time to bring substantial production online. Still, some observers see the possibility that Iranian methane gas could take up some of the Russian slack if sanctions on Tehran are lifted.

Of course, the Iran fix for the shortages of fossil fuels would ideally be a short-term one. The greatest effort should be invested in replacing those fossil fuels with no-carbon alternatives.