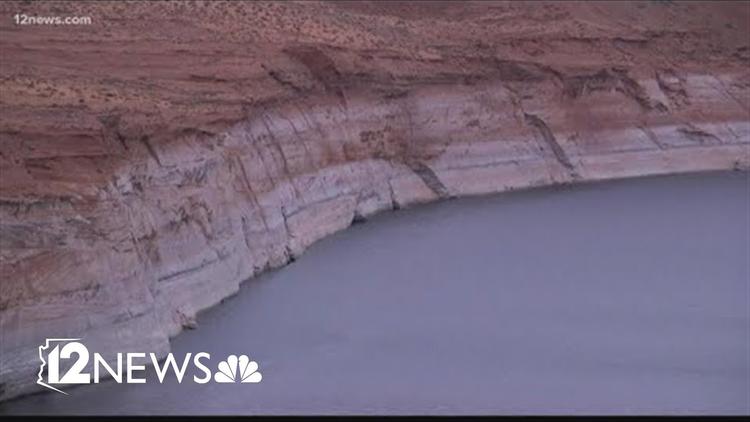 By Autriya Maneshni (Cronkite News ) PHOENIX – Water levels on Lake Powell, the second largest reservoir in the U.S., have dropped below 3,525 feet – a critical level that threatens water supplies and hydroelectricity for millions of people. The U.S. Bureau of Reclamation had predicted the threshold wouldn’t be reached until August.

The reservoir’s storage capacity of 26.2 million acre-feet is made possible by Glen Canyon Dam – a 710-foot tall concrete wedge that began pooling the Colorado River behind it in 1963. It took 17 years to fully fill Lake Powell. In addition to irrigating fields and cities, the water turns the dam’s eight generators, which can produce 5 billion kilowatts of power a year to residents in seven states.

The lake level puts hydropower electricity at risk because the water has to be high enough to turn the turbines.

“We’re 35 feet away from not being able to generate power at Glen Canyon,” said Bob Martin, the bureau’s deputy power manager for the Upper Colorado River Basin. “So that’s kind of a warning sign that we’re getting closer to that no-generation point that we’re trying to avoid.”

Electricity produced by the Glen Canyon Power Plant goes to Wyoming, Utah, Colorado, New Mexico, Arizona, Nevada and Nebraska, according to the Bureau of Reclamation. But that depends on Lake Powell holding enough water to keep the turbines spinning.

Martin said a steady decline in yearly snowfall has contributed to the decline.

“Last year was really bad,” he said. “We only came up about two or three feet (with snowmelt). And kind of what we’re seeing now is the effects of that poor runoff from last summer.”

The megadrought that has gripped Arizona and the Southwest since 2000 has contributed to the dwindling levels. The region is the driest it’s been in more than 1,200 years, and that will likely continue, according to the journal Nature Climate Change.

As temperatures rise and precipitation declines, help could come from the Drought Contingency Plan signed in 2019 by representatives of the seven Colorado River Basin states, the Department of Interior and the Bureau of Reclamation.

Glen Canyon Dam pools the Colorado River behind it to generate hydroelectric power. “We’re 35 feet away from not being able to generate power at Glen Canyon,” says Bob Martin, the bureau’s deputy power manager for the Upper Colorado River Basin. (Photo by Sadie Babits)

It involves voluntary reductions and conservation of the Colorado River during water shortages to ensure that Lake Mead, which straddles the Arizona-Nevada line, and Lake Powell can remain functional.

For example, without the plan, chances of Mead dropping to 1,025 feet are 43% by 2026, but with the plan in place, that risk falls to 8%, according to the Central Arizona Project, which delivers water from the Colorado River.

The Bureau of Reclamation in August declared the first water shortage in the Colorado River Basin, triggering reductions in deliveries to users in Arizona and elsewhere, and further cuts will be required if Mead drops below that 1,025-foot benchmark.

Arizona’s participation in the contingency plan could bring the state more water security, but it comes at a cost.

“If Lake Powell is at these critical levels, the U.S. Bureau of Reclamation could decide to hold back water from Lake Mead, which in turn means that whatever level Lake Mead is at could mean bigger cuts for Arizona and bigger cuts for the other lower basin water users as well,” said Sarah Porter, who directs the Kyl Center for Water Policy at Arizona State University.

The upper basin states – Wyoming, New Mexico, Utah and Colorado – will take additional measures to shore up Lake Powell based on the Drought Contingency Plan, Porter said. These measures could take a variety of forms, such as voluntary conservation where water users agree to not take water from the lake, she said.

Although the latest drop at Lake Powell is concerning, Martin said there is still a chance for the water to rise.

“Water is going to come up as we start seeing runoff,” Martin said. “We saw opportunities for precipitation for higher elevations that can change our outlook.”

According to the National Oceanic and Atmospheric Administration, snow-water equivalent conditions as a percentage of normal have remained steady since mid-February, with mid-March conditions ranging from 85% to 115% of normal across the upper basin and 20% to 145% across the lower basin.

Along with more snow and rain, Martin said, conservation can help.

“The time to conserve water is now and it was probably yesterday,” he said. “This isn’t something that we can just turn a blind eye to.”

Autriya Maneshni (AW-tree-yuh MA-nesh-nee) (she/her/hers) News Broadcast Reporter, Phoenix, expects to graduate in May 2023 with a bachelor’s degree in journalism and a minor in psychology. Maneshni, who has interned with KJZZ and is music director for Blaze Radio, is working for the Phoenix news bureau.

Evan Lis eh-vun liss (he/him/his)News Reporter, Phoenix, expects to graduate in 2023 with degrees in journalism and meteorology. Lis, who has worked as a weather intern at WCAU in Philadelphia, is working for the Phoenix news bureau.