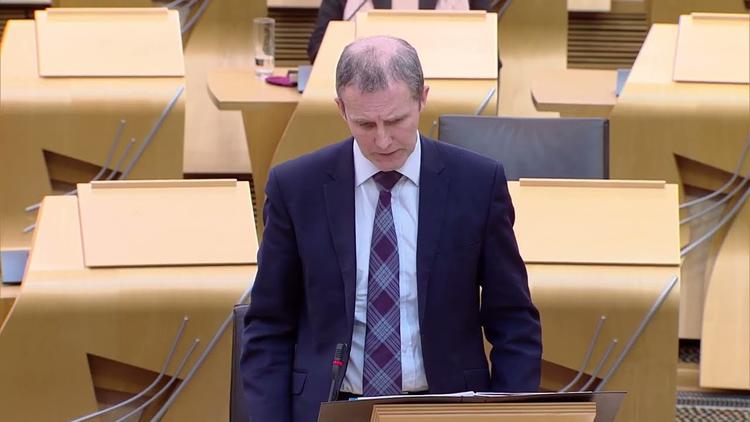 Ann Arbor (Informed Comment) – Scotland actually has a “Net Zero and Energy Minister,” Michael Matheson. Jane McLeod at the National writes that Matheson sees the energy crisis sparked by Russia’s invasion of Ukraine as a wake-up call for Scotland to hit the accelerator regarding its green energy plans.

Scotland already gets nearly 100% of its electricity from renewables, but much of its building heating comes from methane gas, and its transportation sector still largely depends on petroleum. Both commodities are wrecking the planet with dangerous carbon dioxide emissions and have spiked in price, creating fuel insecurity among the poor and elderly. Matheson not only sees the crisis as a wake-up call to move even more quickly to wind and tidal power in Scotland itself but also envisages Scotland exporting its wind-driven electricity to Europe.

Matheson pushed back against Scottish members of parliament who wanted to revive the country’s fading oil and gas industries as a way to replace Russian methane gas. He insisted that renewables are a “more consistent and stable form of energy supply” and contrasted them to volatile hydrocarbons.

The Scotsman quotes the Strategic Business Development manager at Port of Cromarty Firth, Joanne Allday, as saying that the government’s surprise January announcement that it would let bids for some 25 Gigawatts of new offshore wind power was an “incredible statement of intent to put Scotland on the offshore wind map,” saying, “Offshore wind is, if you like, our country’s renewable superpower.”

I had written on January 19 when this announcement was made, “17 new massive offshore wind projects have been authorized off Scotland that collectively would generate 25 gigawatts of power. Note that the total offshore wind capacity as of 2020 in the whole world was only 35 gigawatts, so this one set of “ScotWind” projects will almost double the global total.”

Apparently Matheson is hinting that even more offshore wind will now be developed by Scotland.

Scotland is pursuing both turbine towers rooted in the seabed closer to shore and floating wind turbines farther out, where winds are stronger and more consistent. Allday wants Scotland to develop floating turbine technology further and to become the world leader in it.

The Scotsman points out, “Estimates suggest for each 1GW of offshore wind power installed, around £1 billion will be invested in the Scottish economy.”

Foreign direct investment was at nearly 6% last year, despite the pandemic and even though FDI fell in Europe as a whole. Scottish FDI has been strong for many years. Allday is saying that offshore wind installations alone will bring in $32.5 billion in new investments.

Bussey writes, “Alex Cole-Hamilton urged ministers in Edinburgh to ‘maximise’ the amount of wind, tidal and even solar power that can be produced, arguing the renewables sector could see Scotland become ‘the engine that powers Western Europe.'”

Cole-Hamilton noted that Scotland was fortunate enough not to rely greatly on Russian oil and gas, but that much of Europe was not as lucky. He added,

“We need a green industrial revolution to maximise the energy we generate from wind, tidal, even solar power. The more that we can export, the more we can reduce demand for Russian oil and gas.

“We should be investing in any project which offers a good chance of reducing domestic demand and expanding international supply. Not only would that offer a boost to our European allies looking to wean themselves off Putin’s supply, it would help hard-hit families struggling with the cost-of-living crisis.

“From our islands which have a track record of being at the forefront of renewable energy innovation to the decades of offshore experience in the north east and the engineering yards of Fife and Glasgow, this is as close to a win-win opportunity as the Scottish Government are ever going to be offered.”