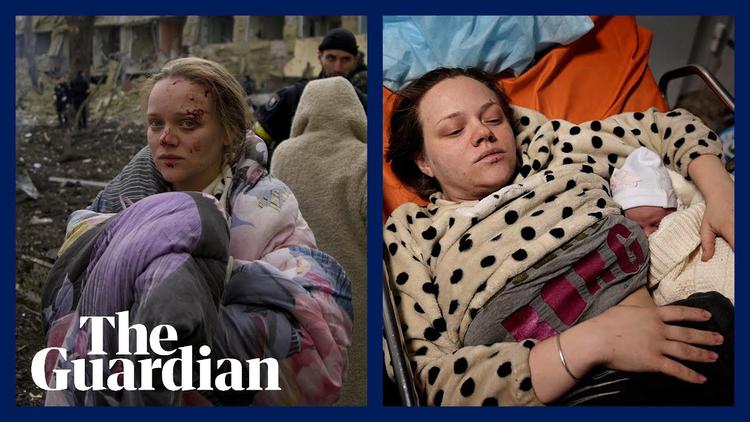 By Shelley Inglis, University of Dayton | –

Images of pregnant women fleeing a bombed maternity ward in Mariupol, Ukraine, raised again the question of how far the Russian military will be willing to go to conquer the country – and whether war crimes are being committed.

In just over two weeks of the invasion, the World Health Organization has verified 39 attacks by Russians on health care facilities. Ukraine claims more civilians than Ukrainian soldiers have already been killed.

International humanitarian law, constituting agreements between countries on the laws of conduct in war, requires militaries to avoid the deliberate targeting of civilians and the use of weapons like cluster munitions that are indiscriminate – in other words, have a high chance of affecting civilians.

It also calls on warring nations to prevent extensive damage to civilian infrastructure, such as schools, residential buildings and hospitals. Simply stated, under these criteria, war crimes take place when there is excessive destruction, suffering and civilian casualties. Rape, torture, forced displacement and other actions may also constitute war crimes.

There are other international crimes, including genocide and crimes against humanity. The latter consists of similar acts like rape and murder undertaken as part of widespread or systematic attack directed against a civilian population.

As a scholar of human rights and the law, I believe there is clear evidence that Russia has already engaged in violations of international law, including war crimes. Although the potential for holding Russian commanders, and even President Vladimir Putin, accountable and punishing them for international crimes is more likely than in the past, the path is likely long and difficult. Moreover, it is unknown what effect, if any, the specter of prosecution will have on the course of the war.

That’s because international justice has been unable to either prevent or prosecute many perpetrators of war crimes in the past decade.

International law experts point to the earlier ravages of Russian military actions in both Chechnya and Syria as an indicator of the tactics Putin is willing to use in the invasion of Ukraine.

Russia fought two wars against the breakaway republic of Chechnya in the years following the fall of the Soviet Union. The second – in which Putin cut his teeth as a wartime leader – was seen as particularly brutal.

During that 1999-2000 conflict, advocacy group Human Rights Watch collected evidence that Russia carpet-bombed the capital Grozny and other towns, causing heavy civilian casualties – estimates run into the tens of thousands killed – and leaving much of the capital destroyed.

There is also compelling evidence that war crimes and crimes against humanity were committed during Russia’s occupation of South Ossetia in Georgia in 2008 and in relation to its annexation of Crimea and engagement in eastern Donbas region in Ukraine in 2014.

In 2015, Russia participated in Syria’s civil war on the side of President Bashar al-Assad by providing Russian air support to Syria’s army. According to Human Rights Watch, the aerial bombardment of Aleppo supported by the Russians in 2016 was “recklessly indiscriminate, deliberately targeted at least one medical facility, and included the use of indiscriminate weapons such as cluster munitions and incendiary weapons.”

The United Nations concluded that the Russian air force was responsible for war crimes in the Syrian province of Idlib in 2019, having bombed indiscriminately a major marketplace and a displaced persons camp, killing and injuring scores of men, women and children. Russian denied any culpability. And no charges against Putin or Russian military commanders have ever been formally pursued internationally for alleged crimes in Chechnya or Syria.

Either way, military experts expect Russia’s tactics in Ukraine to only intensify in its brutality and disregard for the laws of war.

In search of accountability

Many scholars pin their hopes for accountability on the International Criminal Court, which was established under the Rome Statute in 1998 with 123 states parties. The aim of the court is to prosecute those responsible for genocide, crimes against humanity, war crimes and aggression.

Although neither Russia nor Ukraine is a party to the Rome Statute, the ICC has initiated an investigation into alleged crimes based on a special declaration by Ukraine. This gives the ICC legal authority to investigate and prosecute alleged crimes committed in Ukraine since 2014.

But while this early action means that evidence might be collected in real time and speed up the usually slow process of international justice, there are still substantial problems in prosecuting these alleged crimes.

The standards set for proving massive and complex international crimes are more daunting than for domestic crimes. It is even harder to prove command responsibility by a head of state, such as Putin, particularly when there is no cooperation between the ICC and the country of the accused. Successful cases are few and have taken place only after a leader’s fall from power and only if the court has cooperation with the country. That’s how Slobodan Milosevic of Serbia was prosecuted by the International Criminal Tribunal for the former Yugoslavia. Similarly, former President Charles Taylor of Liberia was prosecuted by the Special Court for Sierra Leone.

Other options for criminal trials exist outside the ICC but also face major obstacles. Advocates have harnessed the concept of universal jurisdiction – inspired by the efforts of Spain to bring former dictator Augusto Pinochet of Chile to justice – to bring perpetrators of war crimes in Syria to trial in European courts.

Legal experts are also looking at the prosecution of Putin and Russian leadership directly for the crime of aggression in regards to Ukraine.

For this crime, the ICC does not have legal authority to prosecute Putin without a U.N. Security Council referral. Given that Russia has a seat on the Security Council, where it wields a veto, that won’t happen. Options include establishing a special tribunal by Ukraine with U.N. General Assembly endorsement or other international support.

But the ICC and special courts are “made from scratch” institutions, with limited capacity and without a police force. Practically, getting Putin or other Russian leaders into any court is an issue. For example, the ICC still struggles to capture former Sudan President Omar al-Bashir, accused of genocide and other crimes in Darfur, despite issuing arrest warrants for him in 2009 and 2010.

Advocates point out that impunity – the ability to escape responsibility for violations of international law – has been on the rise for many years, along with authoritarianism.

That means the initiation of criminal investigations might have little impact on the calculations of Putin, senior Russian leadership or commanders and soldiers on the ground in Ukraine. Some international law experts argue that even where actual prosecution and punishment might not be immediate, actors who care about their legitimacy domestically or internationally are more likely to be deterred from committing more crimes by potential prosecutions. However, there are no firm conclusions about the preventive or deterrent effect of international justice.

The actions of Russia in Ukraine might spur investigations at an unprecedented pace. And the ICC can issue arrest warrants in order to prevent the further commission of crimes. Such warrants would affect the accused’s ability to travel and officially represent the country.

When, or if, the formal label of accused “war criminal” gets attached to specific Russian names, it is possible that the prospect of accountability will become a more significant factor in the decision-making of those responsible for the ruthless war in Ukraine. But it will still be too late for the many victims already being identified.