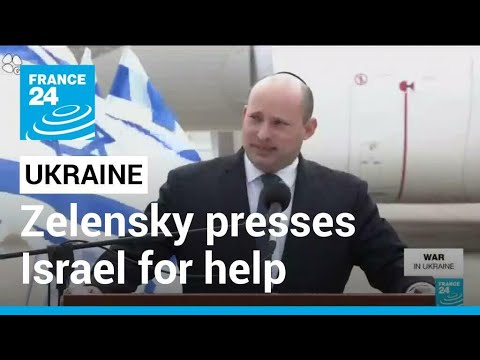 ( Middle East Monitor ) – Israel’s balancing act in the Russia-Ukraine war is likely to falter soon, simply because the resulting NATO-Russia conflict is expected to last for years, not weeks or months. Eventually, Israel would have to make a choice. Alas, whatever that choice may be, Israel will stand to lose.

From the first day of the war, Israel somehow became involved. Top Israeli officials, including the country’s Prime Minister Naftali Bennett, began calling their Ukrainian and Russian counterparts. Initially, some in the media surmised that Israel is concerned because of the large Jewish populations in both Ukraine and Russia.

However, the headlines quickly moved on, with terms such as ‘Israeli oligarchs‘, ‘Jewish oligarchs‘, and other combinations of Israel-friendly oligarchs dominating the news. Business interests quickly began replacing the supposed concern over the safety and welfare of ordinary Ukrainians.

The latter fact was demonstrated in a most tragic way when Israeli Channel 12 reported, on 10 March, that many Ukrainian refugees were “stuck at Ben Gurion Airport, facing cold and callous treatment”.

Israeli hypocrisy reared its ugly head once more on 26 February, when Israeli Minister of Aliyah and Integration, Pnina Tamano-Shata, said in a statement, “We call on the Jews of Ukraine to immigrate to Israel – your home.”

. . . [T]hese newcomers to Israel would eventually be incorporated into the country’s illegal settlement enterprises. We know this from history and particularly from the history of the migration of Russian Jews to Israel, who arrived in their hundreds of thousands in the early 1990s. Not only do many of them now reside in illegal Jewish settlements, but to some extent, they also represent the backbone of some of Israel’s far-right political parties, the likes of Avigdor Lieberman‘s Yisrael Beiteinu.

Aside from the fact that a country moving its residents to an occupied territory is a stark violation of international law, it is also a violation of the rights of these vulnerable refugees, who will be expected to live in another war zone in the service of Israel’s Zionist ideology.

It is unfortunate, but typical that Israel finds opportunities to bolster its settler colonial model in occupied Palestine by exploiting the tragedies of other societies to its advantage. It has done so many times in the past: in Ethiopia, following the famine in 1984, in Russia, following the collapse of the Soviet Union, and in France, following the Paris terrorist attacks in 2015.

While France was still trying to fathom the enormity of its tragedy when 130 people were killed in broad daylight on 13 November, 2015, then Israeli Prime Minister Benjamin Netanyahu called on French Jews to move to Israel. “Of course, Jews deserve protection in every country, but we say to Jews, to our brothers and sisters: Israel is your home,” he said.

Shamelessly, Israel finds tragedies as political opportunities worth exploiting. While this quality is not unique to Israel – the Russia-Ukraine war has also exposed the opportunism of other countries around the world – Israel’s exploitation is doubly shameful as it hopes that war-torn Ukraine would help it sustain its own war waged against the Palestinian people.

However, serious cracks in the Israeli balancing acts are already on display. On 11 March, US Under-Secretary of State for Political Affairs, Victoria Nuland called on Israel to join sanctions against Russia. “We’re asking as many countries as we can to join us. We’re asking that of Israel as well,” she said.

Understandably, much of that pressure is coming from the Ukrainian government itself. Volodymyr Zelensky has repeatedly called on Israel to reciprocate for the Ukrainian support of Israel during its genocidal wars on the Palestinians. Indeed, Zelensky has taken every opportunity to express his solidarity with Israel in the past, even though Palestinians were the ones dying in their thousands.

“The sky of Israel is strewn with missiles. Some cities are on fire. There are victims. Many wounded. Many human tragedies,” the Ukrainian President tweeted on 12 May, 2021. Even during his inauguration speech in May 2019, Zelensky did not forget to bring Israel into his budding political discourse. “We must become Icelanders in soccer, Israelis in defending our land, Japanese in technology,” he said.

Still, aside from the occasional lip service, Israel insisted on remaining largely neutral. Analysts have explained the Israeli position in terms of Israel’s concern over Russia’s possible retaliation in Syria, for example, by allowing Iran greater geopolitical access to Syria that may compromise Israel’s ‘security.’ Others cited Israel’s deep financial interests, especially through the aforementioned oligarchs. Whatever the reasons may be, pressure is mounting on Israel to completely abandon its interests in Russia in favour of fully supporting Ukraine.

On 20 March, Zelensky upped the ante when he gave a speech at the Israeli Knesset. Not only did the Ukrainian President ask for Israel to provide Ukraine with an Iron Dome similar to the one that Tel Aviv uses to intercept Palestinian resistance rockets, he went much further, by infusing the Holocaust, an extremely sensitive discourse that only Israeli officials are allowed to use – and, indeed, manipulate – to silence any criticism of Israel internationally.

For the Ukrainian President, although himself Jewish, to dare strike such a historical parallel to serve his country’s interests outraged many Israelis. “I admire the Ukraine president and support the Ukrainian people in heart and deed, but the terrible history of the Holocaust cannot be rewritten,” Israeli Communications Minister, Yoaz Hendel, tweeted. Many others joined in, in Israel and the US, attacking Zelenky’s supposed audacity.

Aside from its fear that injecting the Holocuast as part of Ukraine’s anti-Russian discourse could deprive Israel from its monopoly over the use and misuse of that historic tragedy, the Israeli official response to Zelensky also further exposed Israel’s stance on the war as defensive, suspicious and uncertain.

As the war rages on, Israel’s balancing act is becoming increasingly unsustainable. By allying fully with Ukraine, Israel could find itself at risk of losing Russia’s somewhat tolerant position pertaining to Israel’s ‘security’ in Syria and throughout the Middle East. Israel could also likely find itself at odds with Russia’s allies and semi-allies in China, India and other Asian countries. However, taking Russia’s side, a less likely scenario, means a break up of Israel’s historic alliance with its main benefactors in Washington and other European capitals.

As the world is likely to splinter among various power camps, Israel will find itself torn between its interests in the West, on the one hand, and the massive, emerging markets in the East, on the other. Though the West’s margin for tolerance when it comes to Israel by far exceeds its patience with other countries, it is only a matter of time before Israel will be expected to make a clean break from Russia and its economic, political and military interests that are tied to Moscow. When that happens, the geopolitical balance of power in the Middle East will likely shift against Israel, a scenario that would become even more difficult for Tel Aviv, if Iran manages to negotiate a return to the nuclear deal with the US and its western allies.

Though from the onset, Israel attempted to exploit the Russia-Ukraine war to its advantage, future scenarios are quite bleak for Tel Aviv.

This column has been very slightly edited for IC editorial policy. A sentence has been omitted that spoke of internal state of mind with no evidence.