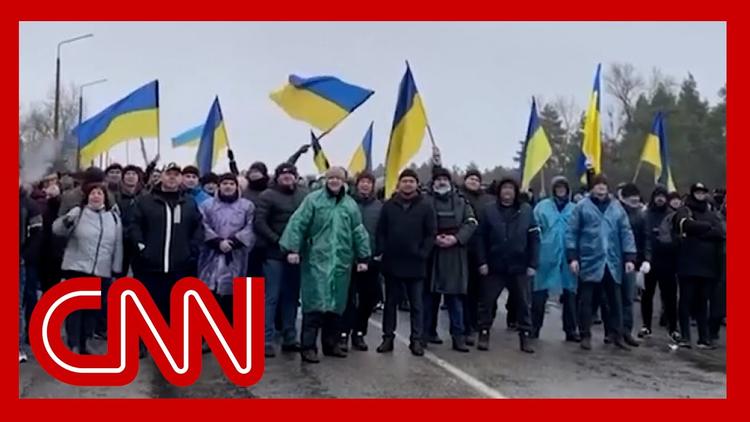 The near disaster at Europe’s largest nuclear power plant shows why activists fought for decades to end these risks — and why mass action is needed once again.

They stood solemnly in the street, waving Ukrainian flags against a backdrop of assorted parked tankers and trucks surrounded by buffers and sandbags — all while the Russian military advanced on the site.

Just over 24 hours later, an auxiliary building at Zaporizhzhia was engulfed in flames, as Russian troops reportedly fired on — and eventually took control of — the plant.

Warnings flashed across Twitter, including from beleaguered Ukrainian President Volodymyr Zelensky, that a nuclear disaster at Zaporizhzhia could be the end of Europe. The country’s foreign minister warned of a nuclear catastrophe 10 times worse than the 1986 accident at Chernobyl, which sent a plume of radioactive fallout across the former Soviet Union and Europe that is still adversely affecting human health today. (Earlier in the invasion, the Russians actually took over the closed — but still radioactive — Chernobyl nuclear site during what was described as a “firefight.”)

It took courage for ordinary people to stand in defense of the Zaporizhzhia nuclear power plant and in defiance of Russian military might. But the prospect of something as dangerous as a nuclear power plant falling into hostile — and potentially inexperienced — hands was an unacceptable risk.

It’s a risk Ukrainians already know all too well. Even in the hands of experts, human error still set in motion the 1986 Chernobyl disaster. And yet, Ukraine has persisted with nuclear power and now gets half of its electricity supply from15 commercial nuclear reactors, situated at four sites. Of those locations, Zaporizhzhia is the largest plant — both in Ukraine and Europe — with six reactors. Even if only one reactor were breached, it would release far more radioactivity than Chernobyl in 1986. This is why Ukrainians were so intent on defending it.

The rise of the U.S. anti-nuclear power movement

Almost 45 years ago, on May 1, 1977, 2,000 people shared the same concern about a yet unbuilt nuclear power plant in the sleepy seacoast town of Seabrook, New Hampshire. Organized into affinity groups, trained in nonviolent civil disobedience and decision-making by consensus, they marched from friendly staging grounds onto the construction site and established a peaceful occupation. After two days, they were removed by an interstate compact of police and loaded into school buses and tractor trailers.

This action was organized by a group known as the Clamshell Alliance, which had formed a year earlier, in 1976, by a handful of activists at a backyard picnic — including one of us, Paul Gunter. The Clamshell Alliance was a direct response to the planned construction of two nuclear reactors on the marshes of Seabrook. Initiated by the Public Service Company of New Hampshire, the reactors would sit atop an Native burial ground close to the heavily-populated beach resort of Hampton.

The group that would end up sparking the U.S. anti-nuclear power movement started off small. One of the first things the Clams did was put together a horse-drawn wagon re-equipped as a puppet show stage. Inspired by the Albert Einstein quote — “To the village square, we must carry the facts of atomic energy. From there must come America’s voice” — they trekked across the state, performing a show on nuclear power dangers at one town square after another.

After 10 days, the Clams arrived at Seabrook, where — on August 1, 1976 — a small affinity group of trained activists engaged in the first occupation of the newly razed construction site. The group rededicated the site to nature with a planting of maple saplings, sunflowers and corn plants, before each member was arrested, forcibly removed and detained.

This was the Clamshell Alliance’s first major action, resulting in 18 arrests. By the following May, when they occupied the Seabrook construction site, more than 1,400 were arrested — making it, at the time, one of the largest mass arrests in U.S. history.

The 1977 May Day occupiers were taken to the Portsmouth National Guard Amory for arraignment before being transported to several armories and county jails around the state. There, they were held on “bail solidarity” en masse for up to two weeks. Inside the armories, they quickly convened a symposium on nuclear power and took advantage of what was considered, by consensus of course, the greatest opportunity ever for networking, training and mass organizing.

Eventually, more than 4,000 Clams would be arrested in waves of peaceful blockades of the reactor site. Only one of the two Seabrook reactors would ever operate, with the project bankrupting four New England electric companies in the process.

Following the Clamshell Alliance’s bold actions, massive nonviolent demonstrations, blockades and public events swept across the nation — from the Shoreham construction site on Long Island, New York to the Diablo Canyon site in San Luis Obispo, California. The anti-nuclear movement rallied at festivals, including the 1979 Musicians United for Safe Energy, a concert that packed New York City’s Madison Square Garden. Meanwhile, thousands of activists blocked Wall Street on the 50th commemoration of the stock market crash in a call to divest from nuclear power.

From 1976 to 1990, nearly half of the nation’s announced applications for construction projects were canceled or abandoned — a process that was only bolstered by the 1979 Three Mile Island nuclear accident. Yet, with the nuclear industry’s precipitous financial decline, the impetus for mass public actions to oppose it also began to fade.

There have been occasional protests — for example, 130 people were arrested at a March 22, 2012 rally of more than 1,000 during a day of action at the Vermont Yankee nuclear power plant. The oldest to be detained that day was the inveterate and diminutive campaigner, Frances Crowe, who was 92 at the time. When asked how many times she had been arrested, she replied, “Not enough”.

While Vermont Yankee closed permanently on Dec. 29, 2014, Crowe lived another five years, to the age of 100.

In recent years, the nuclear power lobby has cycled through a series of different propaganda claims, adapting to the times and the occasional challenge to their false representation of reality. In the 1950s, nuclear power was “the peaceful atom” and “too cheap to meter.” In the 1990s, it was “safe, clean and reliable.” Now, it is “the answer to climate change.”

Realizing that full scale new nuclear power construction would deliver the same financial fiasco as before, the nuclear lobby has abandoned its “Nuclear Renaissance” pipe dream of the mid-2000s. Instead, it has switched to a desperate attempt to secure tens of billions of dollars in taxpayer subsidies to keep aging, degrading nuclear plants operating. It is doing this through serial license renewals out to 80 years or even longer.

At the same time, it is reviving a publicity campaign to promote an old, and previously rejected idea: the Small Modular Reactor. Rolled off assembly lines in mass quantity, SMRs would — according to the industry — save us from climate change. The industry studiously omits from its rhetoric any inconvenient truths, such as the diseconomies of scale, which have so far largely deterred buyers absent a generous federal subsidy.

Meanwhile, as activists and scientists alike sound ever more urgent warnings about the need to get off fossil fuels, the climate movement invariably fails to embrace opposition to nuclear power. This is despite ample evidence that supporting and funding the continued use of nuclear power starves funding from renewables and actually makes climate change worse.

Somehow, the empirical evidence — that the only way to rapidly and effectively address the climate crisis is to use the energy sources that reduce carbon fastest and at the cheapest cost — isn’t getting across. As is often the case, this is not a question of dueling data, but of a minority armed with the facts battling a giant propaganda machine with bottomless pockets and politicians bought and sold.

This was never more apparent than in the bribery, corruption and racketeering scandals that erupted recently around legislation in three states aimed at keeping nuclear power afloat — inevitably at the cost of ratepayers rather than shareholders and corporations.

Ohio was the setting for the biggest criminal racketeering conspiracy in the state’s history when, in July 2020, the then speaker of the Ohio House of Representatives, Larry Householder, was arrested by the FBI. He and four others were indicted for their involvement in a $61 million dark money scandal that ensured passage of legislation guaranteeing the bailout of the Davis-Besse and Perry nuclear reactors to the tune of $1.5 billion.

Later that same month, Stephen Byrne, the former chief operating officer of the South Carolina utility that had been in charge of constructing two new nuclear reactors, pled guilty in a massive nuclear conspiracy that defrauded ratepayers, deceived regulators and misled shareholders. The reactors have since been canceled.

A month later, Michael Madigan, the now disgraced Illinois Speaker of the House, was arrested on suspicion of leading a criminal enterprise that lined his own pockets while benefitting the utility, ComEd, with legislation favorable to the company. Madigan was officially indicted on March 3, 2022 on 22 counts, including bribery and racketeering.

Yet, despite all this, nothing changed. Nuclear power has remained the darling of Republicans and Democrats alike, as they look to inject tens of billions of dollars into keeping aging, uneconomical plants running, while also throwing billions more into the black hole of “research and development” for new reactor mirages.

Even Russia’s invasion of Ukraine — which raised awareness of the very real fears associated with accidental or deliberate nuclear disasters at a reactor site — does not prick the conscience of the nuclear power industry.

Instead, it has rushed hat in hand to the White House, imploring the Biden administration to uphold an exemption that would allow the continued importation of cheap Russian uranium — even as much of the corporate world is extracting itself from any further financial involvement with Russia.

And yet, outrage over this has not brought protesters to the streets. Instead, the nuclear industry is banking, literally, on its political support, as well as a general lack of awareness among the American public about its costs and dangers. Thus emboldened, nuclear power is rebranding itself once more, seemingly immune to criticism or condemnation.

But this doesn’t have to be the final word. Americans have stood up to, and held off, the threats of a surging nuclear power industry before. They need only look to the lessons offered by groups like the Clamshell Alliance — which, not surprisingly, is stirring once again. Its members are older and grayer and some of them are gone. They are ready to pass the torch, but first it must be re-lit.

Paul Gunter is a co-founder of the Clamshell Alliance and currently serves as the Director of Reactor Oversight at Beyond Nuclear.