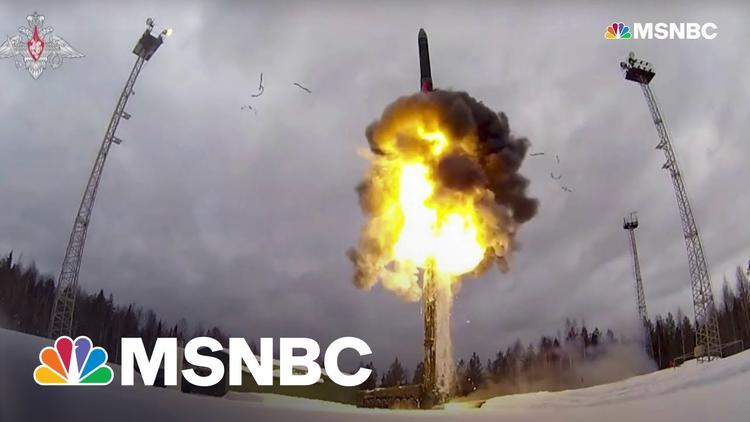 ( Waging Nonviolence ) – Ukraine is on fire. Russia is using cluster and thermobaric bombs, targetting civilians, killing children in its invasion of the second largest country in Europe. Russian citizens are protesting the war, risking brutal treatment to hold signs and public space. Ukrainian citizens are resisting with creative nonviolent action, getting crash courses as field medics, joining militias and clearing rubble. What can we do?

We are emerging from our Wordle fugues to reframe Facebook and Instagram profile pictures with yellow and blue flags to signal our solidarity with the Ukrainian people. But can’t we do more? Throughout the United States, in communities with sizable Ukrainian American communities, we are gathering at churches in candle light vigils and prayer services. Those of us who can are raising money to help refugees and internally displaced people.

So much about how this war is unfolding feels new and unprecedented — even if the story of aggression is as old as Cain and Abel and the list of recent nations bombed goes on and on, including Yemen, Iraq, Syria, Afganistan and Somalia.

One thing that’s decidedly not new, however, is nuclear weapons. They are so last century, but still big and dangerous — and the one thing the people of the United States can actually do something about. After all, we’ve done it before!

If anything good can come out of this horrific war, it might be a renewed movement to abolish nuclear weapons once and for all. An added bonus could be massive investments in renewable energy and local energy infrastructure because fossil fuel dependence is dictatorship dependence.

Here in the United States, the left is so used to our government being the bad guy (see Nixon’s “Madman” theory), that it is weird to hear the evil mastermind line being used aboutcoming from another country’s leader. Nevertheless, Vladimir Putin is playing the part to the hilt. The oft “elected” Russian leader rattled his nuclear saber on Feb. 27, saying “I order defense minister and chief of general staff to put Russian army deterrence forces on high combat alert.” He doesn’t say the words “nuclear weapons,” and his remarks weren’t set against an evil mwah hah hah soundtrack, but you can easily read between the lines and add your own bad-beat.

The Russian military has an estimated 5,977 nuclear warheads in inventory, with more than 4,000 operational and deployable on short, medium or long range delivery systems. As the world responds to Russian aggression with economic sanctions, seizures of goods and funds and strongly worded statements, Putin’s statement is terrifying. The world could go to nuclear code red at a time when we are already 100 seconds to nuclear midnight. We don’t have a lot of wiggle room. The United States’s Ready.gov updated its “Planning for a Nuclear Explosion” page, and there is apparently a run on iodine tablets.

These fears are not unfounded, although iodine is not going to save us all (even if we can get our hands on some). Nuclear nightmares were hyped up even more on Feb. 24 when Russian forces took control of the Chernobyl nuclear power plant north of Kyiv, their trucks stirring up radioactive dust. The very idea of explosions in or near the highly contaminated and massive zone rattled nerves around the world. “The ongoing conflict in Ukraine also has the potential to affect nuclear facilities and cause radiological contamination,” says Dr. Edwin Lyman, Director of Nuclear Power Safety at the Union of Concerned Scientists. “Damaging those facilities, including those at Chernobyl, would not be in anybody’s interest since any radioactive releases would only further contaminate Ukraine, with a potential to impact Belarus and Russia itself.” But it was in Putin’s interests to show how far he would go to keep Ukraine, a former Soviet state, out of the European Union and the NATO alliance.

How did we get here, when just two months ago the five permanent members of the U.N. Security Council affirmed that “a nuclear war cannot be won and must never be fought.” The United States and Russia, along with France, China and the United Kingdom possess most of the nuclear weapons in the world. Their joint declaration, signed on Jan. 3, went on to say: “As nuclear use would have far-reaching consequences, we also affirm that nuclear weapons — for as long as they continue to exist — should serve defensive purposes, deter aggression and prevent war.”

Even as they tepidly acknowledge the “far-reaching consequences” of nuclear weapons (ah, the art of diplomatic understatement), the five nations are all modernizing or expanding their arsenals and establishing plans for nuclear use in a variety of circumstances, according to the Bulletin of the Atomic Scientists. In the U.S., that means an investment of up to $1.5 trillion over the next 30 years on updating and modernizing nuclear weapons and their air, sea and ground delivery systems.

But this is where we come in. Those are our tax dollars at work, and if we have any hopes of shifting that inconceivably large tranche of money from preparation for global destruction to climate change mitigation, green energy and a new transportation infrastructure for the post-fossil fuel era, we had better get moving.

Many see the June 12, 1980 demonstration, which brought over a million people to New York’s Central Park, as the pinnacle of the anti-nuclear movement’s power. But that was just one day of a decades-long struggle grappling and gaining on many fronts. The anti-nuclear movement built relationships with impacted communities from the South Pacific to the Indigenous nations throughout the U.S. where the above-ground nuclear weapons tests and uranium mining were carried out, poisoning the people and land.

The anti-nuclear movement fostered international solidarity and people-to-people connections across Cold War faultlines and behind Iron Curtains. The movement also built its own brain trust, establishing a cottage industry of think tanks and alternative research entities to counter and correct government misinformation, track nuclear activities and disseminate analysis to the grassroots. They built networks of people educated and empowered to organize in their own communities against the military industrial complex, nuclear facilities and outposts that are scattered through literally every congressional district in this nation.

With Women’s Strike for Peace, the Women’s encampments at Greenham Common and Seneca, New York, the anti-nuclear movement took on patriarchy and sexism and celebrated women’s power. The movement learned (imperfectly and in fits and starts) how to be intersectional, consensus-based and work on multiple fronts at once. There was no one leader, no one organization at the head of it all. From Washington, D.C. to Alamogordo, New Mexico to Bellingham, Washington, the movement encompassed  analysts and lobbyists in three piece suits wearing down their heels along the halls of power. Meanwhile, Greenpeace activists intercepted nuclear ships, peace activists blocked nuclear shipments on trains, Catholics exorcized nuclear facilities and held liturgies on missile silos. The anti-nuclear movement was big, broad and diverse.

It won, again and again and again. It is the reason we made it through the Cold War without a nuclear conflagration. It is the reason there is arms control — a complex and fragile web of multilateral and bilateral treaties that govern the use of nuclear weapons. It is the reason there is regulation around nuclear power plants. It won. And then the movement turned its attention to other intersecting movements like green energy, environmental protection, the Movement for Black Lives, the women’s movement, LGBTIQ liberation, local organizing for economic conversion and diversification away from military dependence.

Before this Ukraine flash point, the international anti-nuclear movement was again making headway. They succeeded in creating the U.N. Treaty on the Prohibition of Nuclear Weapons — the only comprehensive legally-binding prohibition that bans the development, possession, threats of use, and use of nuclear weapons, while also containing a framework for their verifiable dismantlement. The organizers won the Nobel Peace Prize in 2017, but nuclear weapons are still not on the radar screens of most Americans. That has to change! We have a responsibility to lead the way to nuclear disarmament.

How do we do that? One step at a time. You could start by learning where your household energy and fuel comes from and take concrete steps to reduce your energy and gas footprint. Another small step could be to dig deeper into this rich history of nonviolent resistance and concrete change. The works of Howard Zinn, Lawrence Wittner and Vincent Intondi are a few good resources. Join this peace movement, which isn’t just a relic of its time, but a living, breathing, struggling organism that would only benefit from your commitment!

Another, larger step, would be to reorganize your livelihood to reduce or remove the federal taxes you pay — 50 percent of which fuel the Pentagon and the nuclear weapons complex. NWTRCC is a great network of activists who can help make that big step feel accessible, empowering and not so solitary.

Finally, we can all learn about, connect with and amplify the courageous work of peace activists in Ukraine, Russia and neighboring countries. They are working so hard and risking so much to rebuff invasion, care for the victims and hold onto their humanity in the midst of the terror of war.

We can’t feel powerless right now. The people of Ukraine need us to do everything we can to stop this war and to get rid of the nuclear weapons that are dangerously close to the surface of this conflict. We can’t do it all. But we can take one (or two) steps towards nuclear disarmament.

Frida Berrigan is the author of It Runs In The Family: On Being Raised by Radicals and Growing into Rebellious Motherhood (OR Books, 2015). She is a TomDispatch regular, writes the Little Insurrections column for WagingNonviolence.Org, serves on the board of the War Resisters League and is active with Witness Against Torture. She has three children and lives in New London, Connecticut.