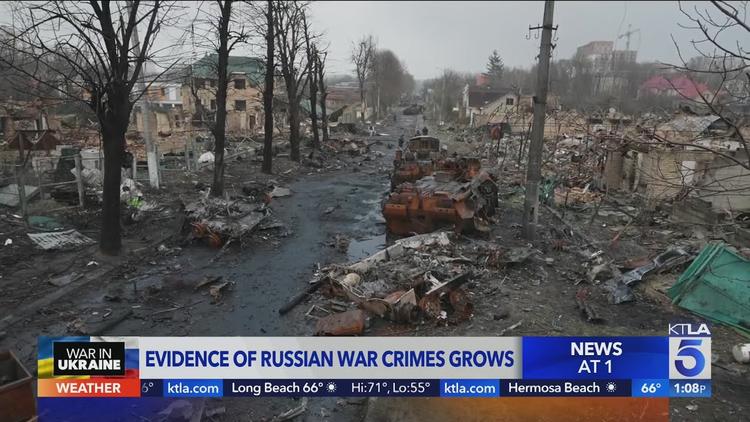 Russian troops retreated from Kyiv and the nearby town of Bucha in early April 2022, and new horrors of their occupation were revealed.

Ukrainian forces found the bodies of at least 410 civilians – among them people who were killed with their hands and feet tied behind their backs and shot in the head. Reportedly there were bodies of women who had been raped and burned, and bodies of children who were also not spared.

Ukrainian President Volodymyr Zelenskyy said on April 3, though, that the dead were indeed victims of genocide – “the elimination of the whole nation and the people.”

War crimes and genocide, though sometimes occurring at the same time, are distinct under international law, several scholars have recently explained in The Conversation.

Here are three recent articles that dive into the complex question of what constitutes war crimes – and why Putin is unlikely to face any real, imminent consequences.

War crimes fall under the vast umbrella of international law, which is based on agreements between countries regarding the conduct of war and peace. International law in this area is rarely easy to enforce.

Russia has a long history of committing war crimes, Inglis says – chiefly, direct attacks on civilians during the Syrian war, as well as during conflicts in Georgia and Crimea.

2. Is Putin committing war crimes or genocide in Ukraine?

Since Russia invaded Ukraine on Feb. 24, 2022, Russian forces have killed at least 1,417 civilians and injured 2,038, according to United Nations estimates.

There are warning signs that Russia is also carrying out genocide – “acts committed with intent to destroy, in whole or in part, a national, ethnical, racial or religious group,” Hinton writes.

One predictor for genocide is a history of committing mass human rights violations, which Russia has done. Other signs include political upheaval at home, and the use of propaganda to demonize people and justify a potential genocide. Russia also fits these criteria.

“Has Russia carried out genocidal acts? Russia has targeted and killed civilians and reportedly forcibly deported hundreds of thousands of Ukrainians, including children, to Russia. It has bombed a maternity hospital,” Hinton writes.

“There is a significant risk that Russia will commit genocide in Ukraine. It is possible that a genocide has already begun.”

3. Will Putin be punished for committing war crimes?

It’s unlikely that Putin will face imprisonment or be removed from power because of war crimes in Ukraine.

“But it can be incredibly difficult and time-consuming” to actually hold people accountable through these systems, write political science scholars Joseph Wright and Abel Escribà-Folch.

“None of these three tools is likely to have much, if any, effect on Putin’s choices in Ukraine,” they say.

One important explanation for why a prosecution of Putin might not happen is that the International Court of Justice focuses on the action of states, not individual leaders like Putin.

Another reason is that Russia is not a member of the International Criminal Court and does not respect its jurisdiction over the country. The court also lacks a police force and relies on other countries “to arrest the accused and transfer them to The Hague for trial.”

“If Putin stays in power, that will most likely never happen,” Wright and Escribà-Folch write.

There is, though, some evidence that calling Putin a war criminal or charging him with war crimes could fail to stem attacks on civilians.

“Leaders who face the prospect of punishment once a conflict ends have an incentive to prolong the fighting. And a leader who presides over atrocities has a strong incentive to avoid leaving office, even if that means using increasingly brutal methods – and committing more atrocities – to remain in power,” Wright and Escribà-Folch say.