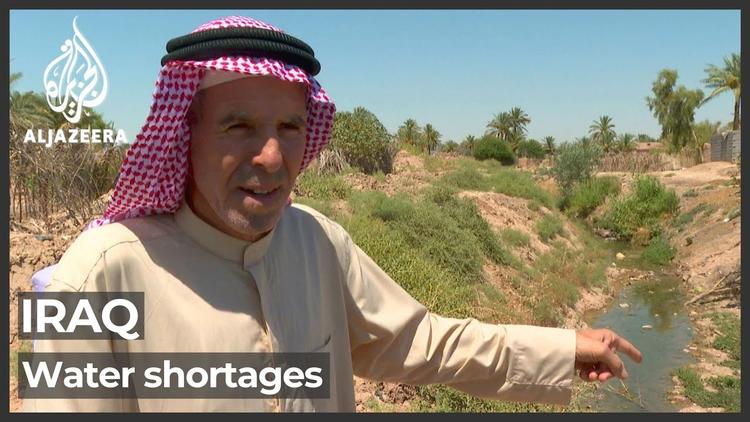 ( Middle East Monitor ) – Until a few years ago, farming in southern Iraq was “as lucrative as oil”, Qasim Abdul Wahad remembers, and his one-hectare farm plot in the Governorate of Basra produced enough to feed his family of eight. Now dust kicks up under his feet as he walks through his land, after worsening extreme heat and drought linked to climate change killed 90 per cent of his winter crops, including all of his okra and eggplant.

“Only a few years ago I would be able to sit here and relax. It was very green and beautiful. When I look at it now, I feel like a member of my family is gone,” the 50-year-old said.

Abdul Wahad, who has spent his life farming in the village of Abu Al-Khaseeb – the names means “father of the fertile” – thinks he will soon have to abandon his land, to try to seek more fertile ground elsewhere.

“Three weeks ago, I started thinking about moving to Babylon, to work as a farmer there. I don’t want to say it in front of my kids though,” he said, once his family was out of earshot.

Iraq is the fifth most vulnerable country in the world to extreme temperatures and water shortages, according to the UN Environment Programme.

The Basra region – already stifling in the summer, with a top recorded temperature of 53.8 degrees Celsius (129 degrees Fahrenheit) – is among the worst-affected areas.

As harsher drought and heat hit food production and the incomes of people dependent on agriculture, about one in 15 Iraqi households, in late 2021, saw at least one family member migrate to seek new economic opportunities, according to the Norwegian Refugee Council (NRC), which researches the issue.

The pressures are evident in Abu Al-Khaseeb, south of the city of Basra along the Shatt Al-Arab River.

Abdul Wahad, this winter, lost an expected okra and eggplant harvest worth $3,700 as well as the $400 he spent to plant it. The winter before, he lost half of the same two crops.

“There is more dust now because of climate change, the rise in temperature is unbearable and there is also a new kind of infection and mites we are noticing that we haven’t seen before,” he said.

Abu Al-Khaseeb was once famous for dates, but its palm trees are caked in dust and production is falling. Abdul Wahad’s last date harvest was 350 kg lower than the year before, he said.

“I have to do some other work now because I can’t just depend on my farm anymore,” he said.

But a lack of awareness in Iraq of the magnitude of the climate change threat – and the continuing use of age-old practices – are both factors limiting change, he said.

“In most cases, farmers are still using methods from centuries ago, when water was not as scarce and weather was not as hot,” he said.

To cope with the rising temperatures and lack of water, Abdul Wahad has resorted to trying to shade some of his crop and is buying drinking water to mix with tap water to irrigate his plants, an expensive and unsustainable plan.

His farm normally draws water from the adjacent Shatt Al-Arab River, but its level has now fallen so low, it can no longer irrigate his fields.

Iraq is predicted to see a 20 per cent drop in water availability by 2050, which could parch a third of its irrigated land, according to the World Bank.

Further up-river, around the village of Al-Qurna – where the Shatt Al-Arab forms at the junction of the Euphrates and Tigris rivers – many fields are still green with wheat, but others were flattened in a recent sandstorm.

“If the wheat is knocked down, that’s it,” farmer Hadi Badr Al-Malai, 57, told the Thomson Reuters Foundation, motioning to his damaged fields.

The large-scale farmer is also battling rising salinity in the soil because of poor drainage, forcing him to leave sections of his 5,000 dunums (1,250 hectares) of land unplanted.

Such problems cut his income by $10,000 last season compared to the previous year, he said.

“I’m worried about the future. Do we all have to leave? Will all my kids have to look for governmental jobs?” asked Al-Malaki, noting his oldest son already works an off-farm security job, though he comes back to help on the land as well.

According to Caroline Zullo, an NRC policy advisor, almost half of wheat farmers around Al-Qurna lost their entire wheat harvest in the most recent crop season.

Such losses are driving growing migration, usually away from farming.

Haidar Sabah Radi, with his wife and six kids, earlier this year left his 75-dunum farm for Al-Qurna village – eight kilometres away – to find work as a taxi driver.

Last summer he sold all of his livestock – including 90 cows and 200 ostriches – because he could no longer afford to feed them.

“There’s no support from the government,” he complained, saying he worried that his children will now be disconnected from farming life.

Iraq’s Ministry of Agriculture did not respond to a request for comment on support measures for farmers.

According to a January report by the UN Food and Agriculture Organization, over 90 per cent of livestock producers in Iraq, last October, had difficulty accessing water or buying feed as a result of drought.

Many fear cities will not be able to provide enough work and homes for those displaced from farming, said Zullo of NRC.

Abd Al-Hussein Al-Abadi, the head of the Federation of Farmers Association in Basra, said government support – including compensation for ruined crops – is essential for farmers to stay on their land.

Failure to provide that could hurt Iraq’s broader economy if farmers abandon their land and the country needs to import more food, he said.

The challenge is particularly severe as the Ukraine-Russian war dries up exports from two major wheat producers, leading to soaring prices for that grain and other imported commodities.

Iraq’s government is helping some farmers by providing hybrid wheat seed designed to stand up to worsening soil salinity, wind and sand storms.

But Mujtaba Noori, the Ministry of Agriculture research department head in Al-Qurna, said not all wheat farmers have access to the seed, in part because they are not equipped to follow Ministry rules on how to plant the new varieties.

Al-Abadi, of the farmers association in Basra, said only 20 per cent of wheat farmers in the Basra Governorate have, so far, been able to buy the hybrid seeds.

“The farmers need to make a profit. If there won’t be serious support by the government with seeds … then the farmers will keep losing, year after year,” he predicted.