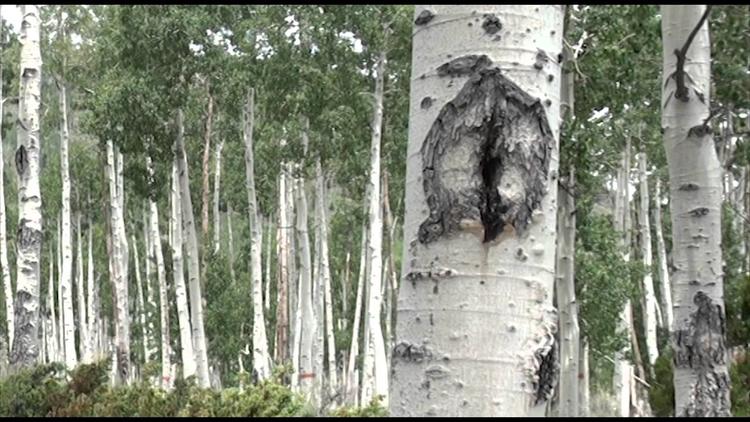 Plants that inhabit the Earth have the incredible ability to grow continually for hundreds of years, and always towards the light of the sun, which provides them with the necessary energy to sprout.

At the source of this growth are changes in their environment, such as variations in light, temperature and humidity. But new stimuli from current climate changes are disrupting the normal growth of plants.

As a doctoral candidate in biochemistry at the University of Québec in Montréal, I am interested in the structure of plant proteins, and study the ways plants adapt to environmental stresses (drought, cold, deficiencies) at the molecular level in order to select more resilient variants for agriculture.

The unmatched longevity of Pando

The oldest forest on the planet, called Pando, is 80,000 years old. Located in Utah it contains 40,000 genetically identical (clones) of quaking, or trembling, aspen trees. The colony communicates via a single root network.

Pando is considered to be the oldest living organism in the world. This colony originated 30,000 years before the first Homo sapiens settled in Europe. Pando, therefore, has borne witness to the totality of modern human life: the empires of China and Rome, world wars and also to humanity’s greatest feats.

Nonetheless, the colony’s poplars have not grown nonstop for 80,000 years. On the one hand, their development is orchestrated by the seasons. On the other hand, they must control their developmental growth according to their needs and physical capacities to face external aggressions. By disrupting external environmental stimuli, the current climate crisis directly affects this normal growth regulation.

The secret of plant growth is buried in the cell

Plants form new organs such as leaves, flowers or roots, as needed to respond to an external stimulus from the environment. For example, a change in the light exposure period during spring triggers flowering.

These stimuli target the DNA by activating specific genes for the development of each organ to form an adult plant. DNA is comparable to a dictionary of genes that contains the code for the physical peculiarities of the plant. These genes are the living words that must be read to express their meaning, and the information they contain.

From seed germination to flower reproduction and the formation of stems, roots and leaves, all the stages of plant development and growth are due to a gene reading phenomenon. To read the genes, specific activators are needed for each of the words. If the environmental conditions change and are conducive to growth, then these activators position themselves at the front of the gene to read and express it, and lead to the specific growth of the organ encoded by the gene.

Plants cannot afford to grow indefinitely because of the energy costs of growth. In addition, similar to animals that hibernate, plants stop growing during the winter, becoming dormant to survive the season. To do this, plants block the reading of genes thanks to safeguards called DELLA proteins.

Found only in plants, these proteins have been constant throughout evolution. They are found particularly in mosses, ferns, conifers and flowering plants. DELLAs are located in the cell nucleus, closest to DNA. They are produced continually and can block gene activators.

To mature, plants must destroy the DELLAs to release the activators. Plants have developed a system for labelling these proteins to influence their destiny in the cell according to their needs. To degrade DELLAs, the cell adds a small protein, called ubiquitin, to its surface. Ubiquitin acts like a postage stamp that tells the cell to deliver the DELLAs to a new destination, a “cellular trash can,” where they will be degraded.

Floods or droughts are increasing all over the planet. Because of their immobility, plants cannot flee from these external attacks. These new environmental parameters stress wild plants and agricultural crops by disrupting their growth, meaning they must save their energy to survive rather than grow, and must not degrade the DELLA proteins.

This requires the DELLA proteins to be labelled in another way, through a cousin of ubiquitin, which scientists have named SUMO. SUMO replaces ubiquitin, and serves as a life buoy so that it does not get degraded.

In fact, SUMO labelling is done in the exact same place where ubiquitin should be added. The presence of SUMO no longer makes it possible to add ubiquitin, which allows plants to survive adverse climatic events.

In the current climate crisis, it is important to investigate and understand this plant growth mechanism in the hope of maintaining sustainability in agricultural crops. Researchers are actively working to isolate or select plants capable of rapidly activating SUMO in order to grow under adverse environmental conditions.