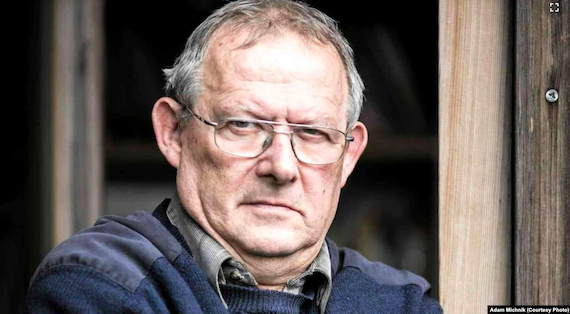 ( RFE/RL ) – Vladimir Putin “has driven Russia into a trap” by invading Ukraine, the former Polish dissident Adam Michnik has said, predicting ultimate defeat for the Russian leader and a chance for much-needed liberal reforms afterward.

“In Russia, changes took place after wars were lost — after the Finnish war, the Japanese war, the Afghan war, and now Ukraine,” Michnik recently told RFE/RL’s Echo of the Caucasus in an interview.

Michnik, a leading intellectual of the Cold War era and longtime critic of Russian domination of Eastern Europe, is now, at age 75, the editor in chief of the liberal Polish newspaper Gazeta Wyborcza.

Adam Michnik is a Polish historian and editor in chief of Gazeta Wyborcza. “We must say it loud and clear,” he says. “We are all Ukrainians now.”

In a column for the paper, Michnik placed the struggle of Ukrainians as just the latest chapter in the historical repression by the Soviet Union and Russia. “We must say it loud and clear,” he wrote. “We are all Ukrainians now.”

In his interview with RFE/RL, Michnik said Putin was likely deluded into thinking events during his latest invasion of Ukraine would largely mirror those in Crimea in February 2014, when Russian soldiers without insignia on their green uniforms seized control of Ukraine’s Black Sea peninsula.

[Putin] did not think that there would be such a heroic response from the Ukrainian Army and Ukrainian society. It’s fantastic.”

“His hope that there would be a repeat of what happened in Crimea. The enthusiasm, as there was during Crimea, did not occur,” Michnik explained.

A month after illegally annexing Crimea in March 2014, Putin sent arms, funds, and other aid to separatists in southeastern Ukraine, sparking a conflict that has left at least 13,200 dead.

In his calculus to go to war, Putin was driven by a belief — held by many Russians — that Ukrainians aren’t a separate people, said Michnik.

“He thinks, as probably some of our common Russian friends do, that Ukraine is not Ukrainians, they are little Russians, one nation. This is a big mistake, not only for Putin but also for many absolutely honest and intelligent people in Russia,” he said.

Putin also got the West’s response wrong, Michnik said, hoping what many have criticized as the hasty retreat from Afghanistan by the United States and its NATO allies was a sign of cracks among the allies.

“[Putin] thought the United States was dead after Kabul, that [Joe] Biden didn’t have a [Donald] Trump illusion, that Biden didn’t think like Trump did, that Putin was a benevolent genius. Biden is a calm, normal person who knows that [Putin] is a bandit, how to behave with a bandit,” said Michnik.

Putin also likely brushed off the capabilities of the Ukrainians, Michnik said, admitting he was himself among the initial skeptics.

“[Putin] did not think that there would be such a heroic response from the Ukrainian Army and Ukrainian society,” he said. “It’s fantastic. No one thought it would happen, and I didn’t think it would either. The Ukrainians told me that this would happen, but I did not believe them.”

Ukraine has estimated as of April 13 that 19,800 Russian soldiers have died since the beginning of the war, citing its own recovery of bodies and intercepted Russian communications. Russia has called the Ukrainian numbers inflated and only twice announced its own figures, a fraction of those tabulated by Kyiv.

Dmitry Peskov, the Kremlin spokesperson, said on April 7 that the country had “significant losses of troops and it’s a huge tragedy for us” during an interview on Sky News, a rare official admission of the scale of the Russian losses.

What support Putin has among average Russians is difficult to gauge, said Michnik, amid worsening repression and the muzzling of any opposition media.

Ordinary Russians can face up to 15 years in prison for questioning or contradicting the Kremlin’s war narrative, with thousands detained so far by police nationwide for speaking out.

“I don’t believe Russians are 100 percent supportive of Putin; 200,000 Russians have gone abroad. In 1968, during the intervention in Czechoslovakia, seven people took to Red Square in Moscow. Today, 8,000 have already been arrested for taking to the streets with the slogan, ‘No To War,'” said Michnik, referring to estimates of how many Russians have left the country since the Russian invasion started on February 24.

Russia has adopted many Soviet tactics in defining those opposed to them, Michnik explained, with Ukrainians dehumanized as “just Nazis, fascists,” in a never-ending barrage on state-run media.

“When there was a winter war with Finland, they were white Finns. Now, not Ukrainians, but fascists, Nazis…. But if they tell you so in the morning, after dinner, in the evening, one day, another day, a third day, after all, you think there is something to it,” Michnik said.

“I remember it well, how in Poland in Soviet times there was anti-German propaganda that all Germans were Nazis. But not these Germans, not ours from East Germany — they were good Germans. Ukrainians from Luhansk and Donetsk who support the Kremlin’s policy are good, but they are not Ukrainians either. They are little Russians.”

Ultimately Russia’s invasion of Ukraine will end with defeat for Putin, Michnik said, and judging by previous Russian military defeats in the past, an opportunity for change may emerge.

“I am sure that Ukraine will become for Putin what Afghanistan became for [Leonid] Brezhnev,” Michnik said, referring to the former Soviet leader who ordered the invasion of Afghanistan in December 1979.

That conflict would lead to the death of some 15,000 troops and 2 million Afghans before its end in 1989, hastening the collapse of the Soviet Union.

Now, Michnik holds out hope that a Russian defeat in Ukraine could be the spark to ignite democratic change in Russia.

“Russia made a bad choice. But we still have hope that it is still possible. I will not live to see it, but my son will live, [and] a new wave will come…”

With additional reporting by Tony Wesolowsky

Vadim Dubnov is a correspondent for RFE/RL’s Echo of the Caucasus, which broadcasts in Russian to Georgia.