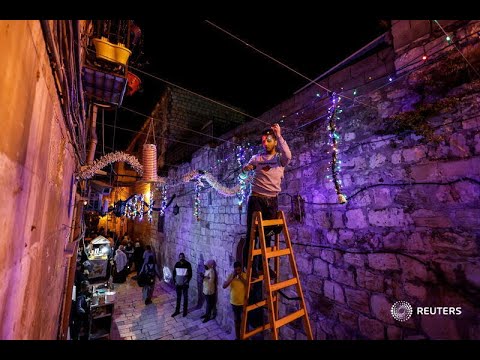 ( Middle East Monitor ) – A far-right member of the Israeli parliament stormed into the courtyards of Al-Aqsa Mosque last Thursday. Extremist Itamar Ben-Gvir was guarded by a heavy police presence at the time. His incursion fell within the context of Israel’s long-term strategic political goal to Judaise occupied Jerusalem and its religious landmarks, the foremost of which is the Noble Sanctuary of Al-Aqsa.

The occupation government is noticeable in seeking to escalate its aggressive moves in Jerusalem generally, and in Al-Aqsa Mosque in particular. It already enforces temporal and spatial divisions between native Palestinian Jerusalemites and Jewish settler-colonists, with the aim of ultimately imposing Judaisation as a fait accompli.

The pace of intrusions by Zionist political and religious figures at Al-Aqsa Mosque has increased, along with increasing calls to divide the mosque between Muslims and Jews. A lot of time has been devoted to this in the discourse of various Israeli parties.

The repeated incursions into the mosque are intended by the Israeli apartheid state to allow Jews to perform Talmudic prayers therein, which will allow it to “justify” the outrageous demand to divide Al-Aqsa, just like the false justification which was used to divide the Ibrahimi Mosque in Hebron in the past. It is worth noting that Israel will not stop at this short-term goal. It is well known that Israeli leaders and extremist Jewish settlers want to destroy all of the Muslim places of worship in the Noble Sanctuary and build a temple in their place.

Calls to divide and take over Al-Aqsa Mosque in order to build a temple are nothing new; they have been made vociferously since Israel occupied and subsequently annexed the eastern part of Jerusalem in 1967, an annexation which remains illegal under international law. Those who made such calls include political, military, religious and human rights leaders in the occupation state. They are often prominent during Israeli election campaigns as candidates vie with each other to attract the growing settler vote.

Among the most serious of these incursions was the storming by a group of twelve young men from the Betar movement on 11 July 1971. They tried to pray in Al-Aqsa Mosque at a time when Jews were banned by their own religious authorities from entering the compound. Eleven days later, another group of Jews from the same movement succeeded in performed prayers in the mosque.

The most dangerous incursion of the Noble Sanctuary of Al-Aqsa was on 28 September, 2000, by the then leader of the right-wing Likud Party, Ariel Sharon, protected by dozens of soldiers and settlers. This “provocative visit” sparked off the Aqsa Intifada (Uprising) in which thousands of Palestinians were killed and injured.

In 2009 there was a record number of Israeli incursions into Al-Aqsa Mosque. In September that year, members of a unit in the occupation police known as the “explosives experts” walked around the sanctuary and the mosque. In the same month, confrontations between Muslim worshippers and the Israeli police and Jewish groups inside Al-Aqsa Mosque and at its gates, resulted in the injury of 16 Palestinians and numerous arrests.

The incursions into Al-Aqsa and its courtyards have increased in recent years. During Ramadan last year, coinciding with May, extremist settlers protected by the occupation police and army entered the sanctuary, a move which resulted in an uprising involving Palestinians across the occupied territories, including the land occupied in 1948, as well as in the wider diaspora. National unity was established in a clear and remarkable manner.

The storming of Al-Aqsa by Itamar Ben-Gvir was not the first and won’t be the last by an Israeli politician, judge or member of the various security services. Groups of extremist Jewish settlers protected by the Israeli police and occupation army are in Al-Aqsa on a frequent basis.

What is certain in all of this is that Israel has started to accelerate its plans to Judaise Jerusalem and reach the stage when it will be able to build a temple at the expense of the blessed Al-Aqsa Mosque.

Some analysts believe that Ben-Gvir’s incursion suggests that Israel intends to take advantage of the inherent pro-Israel bias of the Biden administration and other Western allies of the occupation state. In doing so it also hopes to take further advantage of the shameful, ongoing Palestinian political split in order to tighten its grip on Jerusalem and Judaise all aspects of life there.

Incursions into the Noble Sanctuary of Al-Aqsa and its desecration by illegal Jewish settlers and other Zionist colonisers, regardless of their partisan affiliation, reflect decisions made by successive Israeli governments to control the mosque and impose absolute Jewish Israeli sovereignty over it. The idea of the mosque’s temporal and spatial division is no longer just a slogan; it is already happening as a prelude to the Judaisation of the occupied city of Jerusalem, the prime focus of which is the blessed Al-Aqsa Mosque, the third most holy sanctuary in Islam.

This demands a response from the Arab and Islamic world to put pressure on the international community for a UN Security Council resolution — binding upon all member states, including Israel — to prevent the division of Al-Aqsa Mosque and to condemn all Israeli measures to change the character of the city of Jerusalem in general and the mosque in particular. This will also give greater prominence to the Arab and Islamic dimension of the issue of Jerusalem and what Al-Aqsa is being exposed to. The demand for the UN to implement its resolutions related to the city of Jerusalem, Al-Aqsa Mosque and all other sanctities issued since 1967 can then be made with more seriousness. Such resolutions call for the cessation of settlement expansion, the dismantling of settlements, and the nullification of the forced changes imposed by the occupying state of Israel.

Having entered the month of Ramadan 2022 in the past few days, the question remains whether or not we will see another Palestinian uprising against Israel’s ongoing Judaisation policies, which include incursions by settler-colonists in the Noble Sanctuary of Al-Aqsa Mosque.