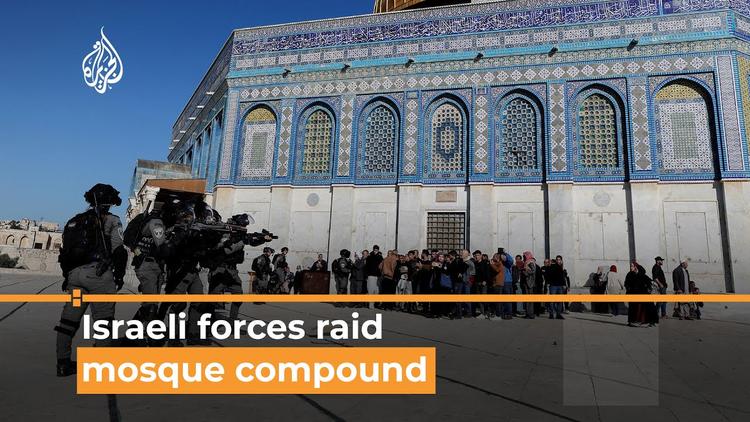 Ann Arbor (Informed Comment) – The Israeli newspaper Arab 48 reports that at dawn prayers on Friday Israeli security forces mounted an assault on the worshipers at the holy al-Aqsa Mosque in Jerusalem, the third holiest site in the Muslim religion, in the midst of the Muslim Lent or fasting month, Ramadan. They injured some 158 and arrested 500 Palestinians. The assault began with tear gas volleys, after which the Israeli forces assaulted the worshipers. The attack lasted for an hour.

Although Western wire services termed the event “clashes,” video of Israeli security forces surfaced showing them beating little old ladies and other civilians, which did not look very much like a clash. Sometimes journalists’ desire for even-handedness obscures the truth. Peacock news anchor Mehdi R. Hasan pointed out that one would not characterize attacks in eastern Ukraine by Russian occupation forces as “clashes” between Russians and Ukrainians.

Thousands of worshipers had congregated at the al-Aqsa compound for dawn prayers on the second Friday of the fasting month of Ramadan. According to Arab 48, Israeli security forces were unwelcome, and when they insisted on invading the compound, they were met with a hail of rocks thrown by youth suspicious of their motives. This rock-throwing formed the pretext for the all-out assault on the congregation.

In the spring of 2021, similarly provocative Israeli assaults on worshipers at al-Aqsa led to massive Israeli repression of Palestinians in Jerusalem and the West Bank, and aerial strikes against densely populated cities in Gaza.

The UN Security Council has denounced the Israeli annexation of East Jerusalem and its settling of Israelis there. Al Jazeera gives some examples:

“Resolution 476: June 30, 1980, reaffirmed the “overriding necessity for ending the prolonged occupation of Arab territories occupied by Israel since 1967” and reiterated that all measures which had altered the status of Jerusalem were “null and void” and had to be rescinded.

Resolution 478: August 20, 1980, condemned in “the strongest terms” the enactment of Israeli law proclaiming a change in status of Jerusalem. The resolution called on all states “that have established diplomatic missions” in Jerusalem to withdraw them from the city.”

When Iraq’s Saddam Hussein was alleged to have defied UN Security Council resolutions, the Bush administration made that grounds for invading the country, toppling Saddam, and seeing him executed.

Those hurt at al-Aqsa included people hit with rubber-coated metal bullets, people beaten with batons, and people who suffered from the inhalation of military-grade tear gas. The Maqasid Hospital in Jerusalem said it had treated 40 of those hurt. 8 were taken to the cardiopulmonary resuscitation room, and two others had to have an operation. Others were treated in the field at makeshift triage points set up by the Palestinian Red Crescent, which complained that Israeli police initially impeded their access to the site where the wounded congregated.

In a statement, the Friday prayers preacher of the al-Aqsa Mosque, Sheikh Ikrima Sabri, said, “The Occupation deployed treacherous tactics and attacked defenseless worshipers militarily and used live fire, and we strongly warn against bringing sacrifices to Al-Aqsa.”

Three Israeli policemen were hurt when struck by rocks thrown by demonstrators.

“Israeli police said they entered the compound, the third holiest site in Islam and revered by Jews as the Temple Mount, to break up a “violent” crowd that remained at the end of the morning prayers. They went in ‘to disperse and push back’ the crowd after a group of Palestinians began throwing rocks towards the nearby Jewish prayer space of the Western Wall.

Palestinians in the West Bank called for volunteers to walk to the places where the tension had broken out in Jerusalem.

During Ramadan it is common for Muslims to hold a retreat at a mosque and stay there overnight. Muslims were at such a retreat at the mosque at the al-Aqsa compound. The Israeli forces assaulted the worshipers on retreat and launched a dragnet, arresting 88 of them. Of the 500 persons taken into custody at the compound, all but 114 were released by the end of the day, according to attorney Khalid al-Zabariqa. The public prosecutor took the unusual step of holding the 114 over in jail for 48 hours, until Sunday, rather than keeping them for 24 hours.

The attorney for the families, Karim Ajwa, said, “The majority of those released signed off on a decree that banished them from the al-Aqsa Mosque.”

The Israeli authorities decided by mid-day Friday to release the children who had been arrested (those under 14). They will be transported to the Qalandiya checkpoint manned by Occupation troops.

The Israelis initially locked up the mosque, barring its doors, and shut the gates of the Old City on streets leading to al-Aqsa. They also set up barriers inside the Old City.

Later in the day, the doors of the al-Aqsa Mosque were unlocked for worshipers.

During the Israeli assault, the troops used flash bombs and teargas on youth, women and the aged. Palestinian youth responded by throwing rocks and molotov cocktails.