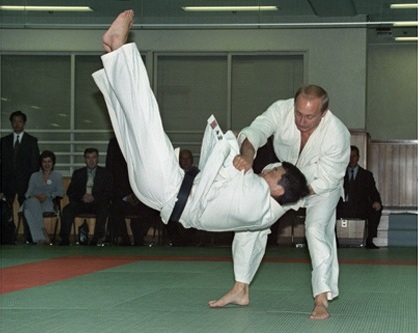 Vladimir Putin has mentioned “gender freedoms” more than once to justify Russia’s war against Ukraine and simultaneously crack down on its own citizens.

Most directly, he alleged that Russian citizens who seek “gender freedoms” (alongside foie gras and oysters) are part of the anti-Russian “fifth column.”

Gender and sexuality freedoms — or rights, as they are more typically called — are about bodily autonomy, diversity and inclusivity. Feminist and LGBTQ+ activists assert that every human being deserves respect, recognition and equal rights regardless of their gender or sexuality.

What’s the connection between Putin’s animosity toward Ukraine and toward gender and sexuality rights in Russia and around the world?

When he first ascended to the presidency, image-makers used Putin’s KGB background and penchant for physical fitness to frame him as a macho strongman who could reverse Russia’s waning power and “remasculinize” the country after a decade of supposed geopolitical flaccidity in the wake of the Soviet collapse.

In other words, an inflexible and clearly patriarchal notion of masculinity has been central to the Putin regime’s legitimacy.

Putin likewise used homophobic terms to dismiss Georgia’s Rose Revolution in 2003, responding to a reporter’s question by saying: “A rose revolution — next they’ll come up with a light blue one.” In Russian, “light blue” or goluboi is slang for “gay male.”

Gender and appealing to constituencies

Putin has often been represented as the unquestioned leader of the pack ruling Russia — a masculinity-driven image.

However, even as the leader of a personalist dictatorship — a regime in which there are few institutional limits on the leader’s power — Putin must balance competing interests among significant elites and maintain at least the appearance of public support in order to be considered a legitimate ruler.

Until 2020, Putin was using gendered language in his speeches to signal his alignment with a variety of elites and public constituencies that supported him. He was sending mixed signals to both relatively progressive Russians who value women’s roles in the workplace and to conservatives wishing for a return to “traditional family values,” in order to keep everyone in his camp.

But after July 2021, when he published an essay contending Ukrainians and Russians are a single people, Putin no longer shied away from making sexist and LGBTQ+-phobic comments in prominent settings.

At an October 2021 meeting of the Valdai Discussion Club — a Moscow-based think tank and discussion forum that Putin is closely associated with — he said teaching children about gender fluidity was “truly monstrous” and “verging on a crime against humanity.”

“I uphold the traditional approach that a woman is a woman, a man is a man, a mother is a mother, and a father is a father.”

And at a news conference shortly before invading Ukraine, he dismissed Volodymyr Zelensky’s supposed dislike of the Minsk agreements, a 2014 ceasefire deal to end fighting between Ukraine and Russia-backed separatists in the Donbas region of eastern Ukraine. Putin said of the Ukrainian president: “Like it or not, my beauty, you have to put up with it” — a possible reference to a Soviet punk song that justifies the rape of a dead woman.

Putin was also signalling allegiance to critics of the “moral decay” of western nations whose perspectives, not coincidentally, overlap with Putin’s hardline advisers on Ukraine.

Several weeks into the the war, however, cracks are seemingly emerging among the elites. If a palace coup is in the offing, it may come from highly placed officers in the Federal Security Service (FSB, the successor to the KGB) who are more concerned with their own power than protecting Putin and his “bare-chested cult of personality.”

Over the last decade, gender and LGBTQ+ issues have become central targets of repression in Russia aimed at protecting Putin’s regime from perceived domestic threats.

Members of the feminist punk protest group Pussy Riot were prosecuted for demonstrating in 2011 and 2012 against widespread electoral fraud.

In 2013, the LGBTQ+ community became an enemy of the people under the so-called “gay propaganda” law that unleashed vigilante violence and pushed many LGBTQ+ people to flee Russia and claim asylum in the West.

There have also been increasing restrictions on abortion, and domestic violence was partially decriminalized.

The state has also been silencing feminist and LGBTQ+ scholarship by labelling gender studies research centres “foreign agents” and forcing scholars out of the country.

Feminist and LGBTQ+ advocates have also faced vicious harassment from far-right hate groups like the infamous Male State with the tacit approval of Russian authorities. The very same hate groups are currently among the most gleeful cheerleaders of Putin’s invasion of Ukraine.

It’s not surprising that women, feminist and LGBTQ+ activists have been at the vanguard of anti-war and anti-Putin resistance.

In the last few weeks, Pussy Riot has produced an NFT to raise funds for Ukraine, feminist activists have risked arrest and beatings for attending anti-war protests and mothers of soldiers in Siberia have tried holding local authorities accountable for using their sons as cannon fodder.

Regardless of whether these activists are using stereotypical gender roles (like soldiers’ mothers) or asserting a non-normative gender politics (as feminists or queer activists), they’re challenging a regime that relies on patriarchy for the legitimacy of its leader.

In sum, gender rights are explicitly democratic, so they threaten authoritarian regimes like Russia’s that rely on traditional, unequal gender roles, heteronormativity and, especially, the cult of masculinity.

Putin’s ire at Ukraine for its assertion of autonomy, including moves toward democracy and human rights, is fuelled by his patriarchal belief that Ukraine’s proper “feminine” role was to submit to the will of its stronger neighbour.

Ukrainians are now paying the price for a regime that disregards their nation’s sovereignty — and Russian citizens’ autonomy.