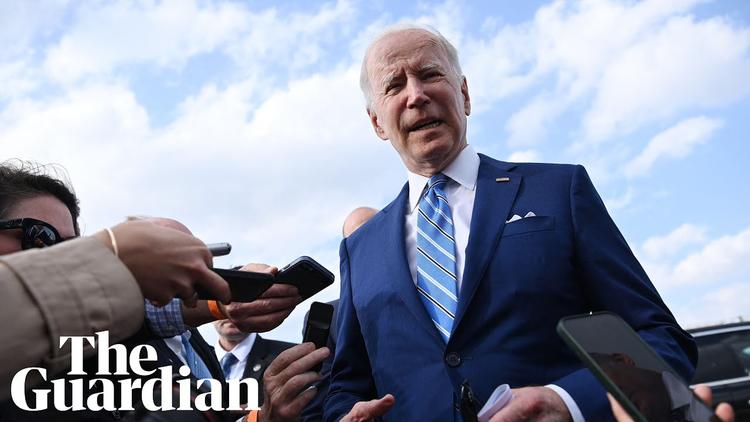 Ann Arbor (Informed Comment) – Kevin Liptak reports for CNN that on a visit to Iowa President Biden talked to reporters about Russian actions in Ukraine and for the first time called it “genocide.” Last week, the president and spokesmen for his administration had avoided using that term.

“I called it genocide because it’s become clearer and clearer that [Russian President Vladimir] Putin is just trying to wipe out even the idea of being Ukrainian. The evidence is mounting,

“It’s different than it was last week, the more evidence that’s coming out. Literally, the horrible things that the Russians have done in Ukraine – and we’re going to only learn more and more about the devastation.

“We’ll let the lawyers decide, internationally, whether or not it qualifies, but it sure seems that way to me.”

Biden appears to have been referring to the graphic photographs and reports that have emerged from Bucha after the Russian withdrawal, indicating the targeting of civilians for torture, rape and death. Under the laws of war, deliberate killing of civilians or even reckless endangerment of them is not permitted. If you can’t kill enemy combatants without killing civilians as well, you are not supposed to take the shot. Killing civilians is, however, a war crime and not genocide, as Biden had noted the previous week.

I have explained before that:

“Most of the countries in the world ratified the Genocide Convention in 1948, which put forward a set of definitions of genocide. These were incorporated unchanged into the 1998 Rome Statute that serves as a charter for the International Criminal Court (ICC), which came into being in 2002.

The definition is actually quite odd from a layperson’s point of view, since it does not actually require that large numbers of people be killed. Most of us think of genocide as mass murder, as with the Khmer Rouge in Cambodia, who killed a fifth of the population.

For the purpose of this Statute, “genocide” means any of the following acts committed with intent to destroy, in whole or in part, a national, ethnical, racial or religious group, as such:

Note that this definition only requires that one of the five actions be committed for genocide to have taken place.

International law specialists have puzzled over this language, wondering what its lower limits are. How about if you just killed one member of an ethnic group (but on the grounds of the person’s ethnicity)? That would presumably fit section a). And does this action have to be plotted out deliberately, i.e., is it like first degree murder with regard to an individual? . . .

It isn’t just causing bodily and mental harm that makes for genocide. It is doing it for the purpose of destroying a people.

The US State Department, after a long and careful investigation, concluded that the junta in Myanmar (Burma) has committed genocide against the Muslim Rohingya minority.

What the Russians did in Bucha and Mariupol and many other cities convinced Mr. Biden that the Russian military has the “intent to destroy, in whole or in part, a national, ethnical, racial or religious group,” and that it is inflicting on them conditions intended to bring about their physical destruction through killing members of the group.

It should be noted that Putin denies that there are any Ukrainians. Denial of peoplehood to a people is often a sign of genocidal intent.

President Biden admitted that he is making an argument from the gut when he says this, and that jurists of international law will make the final determination.

Given the language of the Rome Statute, however, I think we can as lay analysts conclude that there is a prima facie case that Biden’s charge is correct.