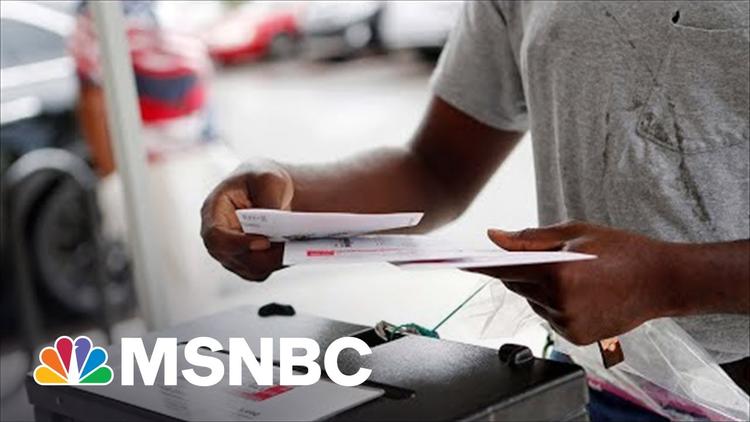 ( Otherwords.org ) – “Voter suppression” is a divisive and highly politicized term. But for the slate of bills Republicans are pushing across the country, it’s the only correct one.

They’re introducing these bills in virtually every state, but three — Arizona, Georgia, and Wisconsin — are especially worrisome. These swing states, along with Pennsylvania and Michigan, helped decide the last presidential election. Each flipped from Trump in 2016 to Biden in 2020.

The GOP’s voter suppression laws are working. They need to be stopped before more states adopt them.

But now, in these states and elsewhere, Republicans want to make it harder to vote by mail, get rid of same-day voter registration and ballot drop-off boxes, limit early voting, reduce the number of voting booths at polling locations, and much more.

If you’re not paying attention to these election bills, you should be. They might determine the next president of the United States.

Joe Biden won Arizona, Georgia, and Wisconsin by a combined 45,000 votes. He didn’t win because of widespread voter fraud or some liberal conspiracy. He won because more people voted for him.

The GOP response hasn’t been to win more votes. It’s been to make sure fewer people get to vote.

Voting rights should be a bipartisan issue. Instead, we’re seeing Republicans throw every voter suppression idea they have at the wall of their Capitol buildings hoping something sticks. A big part of this is Trump’s iron grip over the Republican Party.

To appease Trump, Republicans have spent the last two years trying to overturn the last presidential election. They failed. But if the election bills they’re pushing are signed into law, they may not have to overturn the next one.

Texas Senate Bill 1 is a good example of the kind of restrictive bills Republicans are pursuing in at least 40 states — including those three swing states.

The new Texas law makes it illegal for election officials to send mail-in ballots to voters unless they ask for them. It requires a voter identification number to be included with mail-in ballots. And it bans 24-hour polling places, among other things.

In the first election since the law was implemented, over 27,000 mail ballots were flagged for rejection in Texas. Most rejections were due to a technicality — forgetting to include that newly required voter identification number.

In the end, 23,000 ballots were thrown out, which was about 13 percent of all mail ballots. In Democratic-dominated Harris County around Houston, that figure rose to 19 percent — nearly one in five ballots.

For comparison, less than 1 percent of mail-in ballots in Texas were rejected in the 2020 general election. When ballot rejections increase by 10- to 20-fold, that’s not a free and fair election.

If we see rejection numbers like Texas’s in a general election — especially in swing states like Arizona, Georgia, and Wisconsin — we’re talking about control of the House, Senate, and presidency being stolen. Not stolen from Democrats, but from voters.

According to the Voting Rights Lab, which tracks state-level election legislation, 565 election bills that restrict voter access or election administration have been introduced so far this session. Of those 565 bills, 129 are courtesy of Republicans in Arizona, Georgia, and Wisconsin.

Elections should be about the person with the most votes winning. For Republicans, it’s about putting up as many barriers to voting as possible and shrinking the electorate until it churns out the result they want.

The good news for voters and for supporters of free and fair elections is the vast majority of those bills haven’t made their way out of their state legislatures. There’s still time to stop them.

Robert P. Alvarez is a media relations associate at the Institute for Policy Studies.